The U.S. birthrate continued to fall in 2018, marking the lowest number of babies born in the nation since 1986.

One factor that may be driving the downward trend is fewer teen pregnancies.

“Some of the decline is a very positive signal that we are doing a better job of addressing unwanted teen pregnancies,” Jennifer Johnson-Hanks, a sociology professor at the University of California, Berkeley, told the New York Times. However, she added that declining births among non-teenage women were “more worrisome.”

After effects from the Great Recession might also be helping to lower the national birthrate. But after the recession, the rate briefly rose in 2012, only to fall ever since. What else might explain the drop?

“Not a whole lot of things are going good,” Dowell Myers, a demographer at the University of Southern California, told NPR. “… that’s haunting young people in particular, more than old people.” 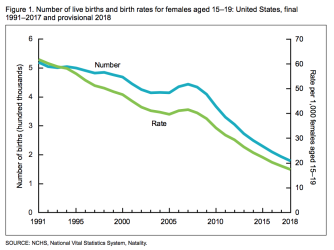 Still, the unemployment rate is going down and wages are on the rise. But those wage gains are mostly going to the people at the top of the job market. What’s more, African Americans and people living in areas hit especially hard by the recession aren’t reaping the benefits of rising wages.

Combined, these factors might help explain why millennials are waiting longer to get married, buy homes, and have children — if they do so at all.

“They’re not able to hit the mark at the same age as their parents,” Tamara Sims, a research scientist at Stanford, told CNBC in reference to home ownership rates.

The same seems to apply to starting a family. In a survey conducted by the New York Times in 2018, the most cited reason for having fewer children than respondents would consider ideal was “child care is too expensive.” Of course, money isn’t the only factor. Fewer millennials are willing to settle down in their twenties. Some simply enjoy the freedom of not having kids. Others cite climate change and political strife as reasons for not reproducing.

​Is a lower birthrate cause for alarm?

Not exactly. The current U.S. birthrate is beginning to mirror those of other wealthy nations.

What’s more, a lower birthrate could signal that women have more control over their professional and reproductive lives. But there does seem to be a point at which having too few babies can hurt a nation. For example, as Japan’s birthrate continues to plummet, the nation is left wondering how it’s going to sustain its economy and support an aging population.

“The labour shortage is getting serious,” Prime Minister Shinzo said in 2017. “To overcome it, we need to improve productivity.”

Tags
childreneconomicsparentingunited states
In this article
childreneconomicsparentingunited states
Related
The Past
How people crossed the Atlantic Ocean before commercial aviation
For centuries, the only way to travel between the Old and New World was through ships like the RMS Lusitania. Experiences varied wildly depending on your income.
The Past
How the crusades spawned the world’s first financial services company
The Knights Templar were not only skilled fighters, but also clever bankers who played a crucial role in the development of Europe’s financial systems.
Strange Maps
Electricity generation by U.S. state
U.S. states vary radically in terms of electricity generation. Vermont is the cleanest, while Delaware is the dirtiest.
The Present
Twenty years after 9/11, hindsight is 20/20
Hindsight is 20/20, particularly when you have had 20 years to think about what happened.
Life
Tornado detection: bringing Stone Age tech into the 21st century
Technology designed to listen for atomic bombs can also hear tornadoes.
Up Next
Starts With A Bang
When Did The Universe Become Transparent To Light?
Depending on how you measure it, there are two different answers that could be right.If you want to see what’s out there in the Universe, you first have to be able […]