I have been asked, both online and in person, about why I haven’t listed Ayn Rand on any of the lists of philosophers you should know. This is the answer: Ayn Rand’s philosophical work is not taken seriously by academia because it isn’t very good, and I was focusing on philosophers you need to know.

Before the flame war starts, let me explain why.

Ayn Rand’s fundamental problem is that her arguments aren’t great. They often don’t support the conclusions she wants them to, or they reach conclusions that seem incoherent. Well-reasoned arguments are the critical difference between a person giving their opinion and a philosopher, and she often failed to provide them.

This isn’t to say that a person cannot be a respected philosopher while not working at a university and primarily writing books that are fun to read. Albert Camus stands out as an example of it being very possible.

in his essay ‘On the Randian Argument‘ libertarian philosopher Robert Nozick pointed out that Rand’s meta-ethical arguments were unsound and didn’t resolve the is-ought problem as she’d hoped. Libertarian philosopher Michael Huemer has suggested that her ethics are incoherent. Her arguments for what the chief goal of human life is all use changing definitions constantly and seem to drive towards three incompatible ends rather than the one she said she was driving at.

The Stanford Encyclopedia of Philosophy argues that her arguments so often fail to support her conclusions that, “It is not surprising, then, that she is either mentioned in passing, or not mentioned at all, in the entries that discuss current philosophical thought about virtue ethics, egoism, rights, libertarianism, or markets.” 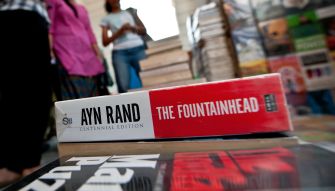 In literary circles, however, her work still invites great interest.

More generally, her philosophy can be viewed as her making polemical assertions that aren’t particularly well argued, or even defended against potential criticisms in many cases. This tendency is a rather substantial problem with her work that makes it more difficult to take seriously.

Being aware of and accepting towards potential objections to your work is philosophy 101. Even Plato, who was very bad at it, did it from time to time. But any outside observer would think that Rand found disagreement to be objectionable in itself.

American television personality Dick Cavett once withdrew an invitation for her to appear on his talk show after discovering her terms included that he promise not to disagree with her philosophy. She did appear on Phil Donahue’s show, however, and didn’t quite convince some audience members that she wasn’t a personality cult.

Many people have written on how her followers regarded her every word as truth, and how little tolerance she had for disagreement. Most prominent among these criticisms are those of anarcho-capitalist philosopher Murray Rothbard, who discussed the cult-like behavior of both Rand and her followers back in 1972.

It also isn’t the case that her ideas are so radical or politically incorrect that she is censored by left-wing academics who disagree with her. The highly regarded American philosopher Robert Nozick came to very similar conclusions on capitalism, the state, and society but did so with much better arguments. Likewise, even philosophers looking to argue for ethical egoism rarely make reference to her. The idea that she isn’t taken seriously because her ideas are of the “wrong sort” is easily refuted by the number of libertarians, ethical egoists, and free-market capitalists that still hold esteem in the academic community.

I’ll leave you with the stance of The Stanford Encyclopedia of Philosophy, which phrases it best:

“She developed some of her views in response to questions from her readers, but never took the time to defend them against possible objections or to reconcile them with the views expressed in her novels. Her philosophical essays lack the self-critical, detailed style of analytic philosophy, or any serious attempt to consider possible objections to her views. Her polemical style, often contemptuous tone, and the dogmatism and cult-like behavior of many of her fans also suggest that her work is not worth taking seriously.”

Tags
anarchismAthemnAtlas ShruggedAyn RandcapitalismegoismEthicslibertarianismObjectivismphilosophyRobert Nozicksocialismthe Fountainhead
In this article
anarchismAthemnAtlas ShruggedAyn RandcapitalismegoismEthicslibertarianismObjectivismphilosophyRobert Nozicksocialismthe Fountainhead
Related
Thinking
6 great philosophers and how they used their political power
Most philosophers merely contemplate the world, but what about the ones who actually tried to change it?
Thinking
Finding your essential self: the ancient philosophy of Zhuangzi explained
Adopting a healthy scepticism towards inherited ideas means “emptying the container of the Self.”
Thinking
Why you should laugh at yourself, according to Seneca and Nietzsche
“It is more human to laugh at life than to lament it.”
13.8
Why the origin of life and the Universe itself might be forever unknowable
There might be a hard limit to our knowledge of the Universe.
Thinking
Bonhoeffer’s “theory of stupidity”: We have more to fear from stupid people than evil ones
Evil is easy to identify and fight against; not so with stupidity.
Up Next
Technology & Innovation
Seven fascinating facts about Ikea’s late founder Ingvar Kamprad
Ingvar Kamprad may be the most influential aesthete in the history of interior design, thanks to the mass-produced and self-assembled furniture created by his company, Ikea.