A loud noise caused a panic at Los Angeles International Airport (LAX) on a recent Saturday in late August. At 8:45pm, passengers who were quietly waiting for their flights suddenly mobilized into a panicked herd, running in all directions, live-tweeting videos, and screaming about a shooter. But there was no shooter, according to local ABC affiliate WKOW. Police evacuated the suspected terminals and did a thorough investigation, but found no viable threat. The noise that shut down an entire airport and backed up flights into Monday morning was a literal false alarm.

That incident is far from the only time Americans freaked out at a false threat. Earlier this month, passengers at Kennedy International Airport in New York City went into the same sort of panic over another literal false alarm. Mall patrons in North Carolina, Michigan, and Florida did too. In every incident, mass hysteria broke out.

People were injured, even trampled, over perceived threats, causing much more damage and fear than if they had simply waited for further information before reacting. That’s hard to do, especially with such a serious situation as a terrorist threat. But it’s just psychological conditioning; reacting calmly to a potential terrorist threat is a choice you can make. Neurobiologically speaking, you can stimulate the production of acetylcholine, a “tranquilizer that you can self-administer simply by taking a few deep breaths with long exhales,” according toPsychology Today. Game designer Jane McGonigal explains the technique here:

A group of former Navy SEALS who offer safety training for mass shootings offers these survival tips as well:

If there’s anyone around you who’s freaking out, either try to quiet them or get away from them. Their anxiety will spread and will make everyone react in a panic, Psychology Today advises.

All of those tips can keep a scary incident from becoming a panicked frenzy. That said, the frenzied response of the airport and mall patrons, while drastic, is understandable. Incidents of shooters in airports at Brussels and Istanbul happened earlier this year. High-profile terrorist attacks in Paris and Nice, France, as well as within our own borders in San Bernadino and Orlando, also happened this year. All of those attacks primed us to expect the worst. Always. “The steady stream of news reports of bloodshed has heightened anxieties out of proportion to the threat,” The New York Times explains, “making panic more likely to take hold.” Dr. Daniel Antonius explained to the Times that there is “a national anxiety about mass attacks that did not reflect the real level of danger.”

The real level of danger is much lower than most of us think. All violent crimes, including terrorist attacks, are at the lowest levels they’ve ever been, according to the Federal Bureau of Investigation (FBI). See? 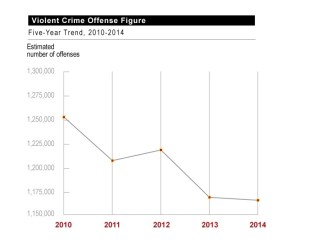 In 2014, only 1,165,383 violent crimes happened in America according to the FBI’s statistics. Sixty-three percent of them were aggravated assaults; 0.000016 percent were terrorist attacks, according to the Global Terrorism Database. That’s 19 terrorist attacks. That’s more than we’d like, but certainly not as many as we feel threatened by. Compared to the onslaught of potential threats stoked by the 24/7 news cycle – and to Pakistan, Iraq, and Afghanistan, whose combined experience of terrorist attacks is 54 percent of the entire world’s attacks – when you look at the numbers, Americans have no reason to panic.

The concentration and intensity of every terror attack in 2015. Source: Global Terrorism Database.

Worse still, living in that constant state of panic is hurting us. We’ve told you before about how fear warps your brain and panic works much the same way. According to the National Institute of Mental Health, panic is “a fear of disaster or of losing control even when there is no real danger.” It brings intense feelings of fear, worry, and helplessness. It can even cause physical symptoms, like a heart attack.

To be clear, the threat of a terrorist attack in the United States is more perceived danger than real danger. But the psychological warfare of terrorism works because it is draws on the natural effects of panic to instill fear and disrupt society, whether through airport shutdowns or mistrust between communities. Australian media commentator Waleed Aly has called terrorism the mouse that roars. By panicking about any potential threat and treating it as if it might be the worst possible one we can experience – a terrorist attack – we dull our senses and response time to actual threats, exhausting our mental and emotional resources. Harvard psychologist Susan David explains it this way: “The more familiar something sounds… even if the story is inaccurate, even if the story doesn’t serve us, the more we are likely to become immured to it and immune to it.”

We do need to be vigilant against terrorist attacks. But we also need to be vigilant against accepting false information and blind panic. Limiting exposure to news will help. Reading Alain de Botton’s The News will help. So will understanding the actual probability of a terrorist attack. But there are real consequences to not taking this seriously. David broke it all down for us:

Tags
airportAlain de Bottonchaosevacuatefalse alarmFBIgunmanJFKLAXpanicshooterSusan DavidterrorismWaleed Aly
In this article
airportAlain de Bottonchaosevacuatefalse alarmFBIgunmanJFKLAXpanicshooterSusan DavidterrorismWaleed Aly
Related
The Present
Why people become radical extremists and how to help them
New research sheds light on the indoctrination process of radical extremist groups.
The Present
Should law enforcement be using AI and cell phone data to find rioters?
The attack on the Capitol forces us to confront an existential question about privacy.
Strange Maps
A normal tourist map, “but everything is negative”
‘Critical Tourist Map of Oslo’ offers uniquely dark perspective on Norway’s capital.
The Present
This company scraped social media to feed its AI facial recognition tool. Is that legal?
If its claims are true, Clearview AI has quietly blown right past privacy norms to become the nightmare many have been fearing.
The Present
Lincoln’s law: How did the Civil War change the Constitution?
Does the President get to decide when to ignore the law?
▸
6 min
—
with
James Stoner
Up Next
Starts With A Bang
A ‘Habitable’ World Around Proxima Centauri May Not Be Very Earth-Like
Now that we know the closest star has a potentially habitable planet, it’s time to ask if it’s really like ours.“To consider the Earth as the only populated world in infinite […]