We’re seeing a lot of references to Earth entering a new epoch characterized by all the changes — okay, damage — we’ve wrought upon the planet.

That epoch, of course, is referred to as the Anthropocene, and as soon as the International Union of Geological Sciences (IUGS) decides that we’ve truly left a sufficient enough mark/stain on the place, it’s out of the Holocene and into the Anthropocene we go.

Some people are just not having it, though. In the same way that many pagan believers stood resolute against the onrush of Christianity, Pioneers of the Greater Holocene plan to populate cracks in the conquering Anthropocene with surviving floral of the Holocene.

“The International Union of Geological Sciences is expected soon to proclaim a new epoch dubbed the Anthropocene,” says Pioneers founder, experimental philosopher Jonathon Keats. “While their work is laudable, we need to take it as a challenge. We should do all we can to protect and promote the Holocene, the geological epoch we inherited.”

While no one expects the Pioneers to actually prevent our epoch of reckoning, the (literally) grassroots guerrilla campaign still has something to contribute to the conversation.

The Holocene era began after the last ice age 11,700 years ago. The word’s meaning is “entirely recent.” However, since atmospheric scientist and Nobel laureate Paul Crutzen popularized the concept of the Anthropocene in 2000, a growing number consider it a sensible delineation given humanity’s track record of mass plant and animal extinctions, pollution, and damage to the atmosphere.

With geologic eras defined by layers they leave in geographical strata, the IUGS hasn’t yet identified an exact point — at which they’d place a “golden spike” — where the Holocene layer would give way to the Anthropocene. 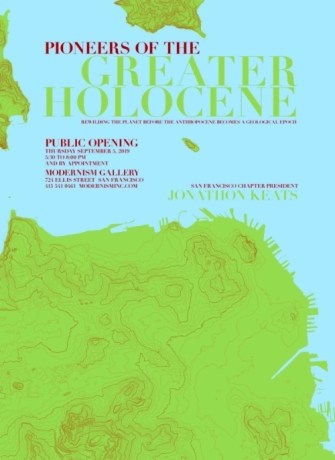 What Keats is putting together is a grassroots campaign to terraform — or re-terraform, really — our cities, beginning with a burg under rapid development: San Francisco. “The Bay Area has a reputation for disruption. Preventing a new epoch by re-terraforming the planet is the ultimate disruptive act,” says Keats. He’s proposing a collaboration “with plants, fungi and bacteria to rewild the planet.”

What Keats specifically plans is that native-grass seed packets will be distributed throughout SF, and that these seeds “will take root wherever people spread them, from empty lots to busy streets.” His hope is that “Over time, these grasses will provide the groundwork for forests to flourish within the urban matrix, not as decorative features for humans but as habitats where all species meet as equals.”

In addition to the seed packets, he plans for the San Francisco campaign to involve the distribution of a nutrient mix for “lichens, symbiotic organisms capable of transforming concrete into soil while also purifying the atmosphere.”

The Pioneers, he suggests, will eventually encompass “a global network of concerned humans and other organisms from all phyla.” 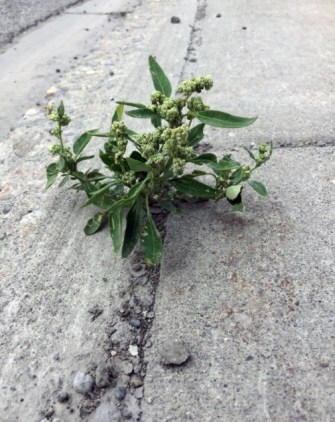 Big Think readers know Keats as the face behind a number of projects that puckishly illuminate what are actually pretty important ideas, and this one is no exception. Though largely a symbolic and definitely tongue-in-cheek effort, it also aims to serve as reminder of a choice we barely seem to be consciously making: We’re so ready to give up a place that has everything we need, not to mention in a form that’s often achingly beautiful. There’s a certain sweet sadness in the mental image of plants quixotically fighting their way through cracks in pavement and walls to survive.

“This layer of crust we live on is really quite pleasant,” says Keats. He suggests that, even now, “We have the potential to bound the human stratum, and perhaps even to remediate it, putting the Anthropocene behind us as an unfortunate geological interlude.”

Tags
activismanthropoceneartclimate changegeologyprotestspublic spacesrewildterraform
In this article
activismanthropoceneartclimate changegeologyprotestspublic spacesrewildterraform
Related
High Culture
Did Paul Cézanne hide an early self-portrait underneath a 160-year-old still life?
To answer that question, we may have to figure out when the famed painter started to go bald.
Thinking
Creative wisdom from Rick Rubin: Embrace your inner gatekeeper
Unlock the full potential of your creativity with holistic detachment. This is the way of the editor.
The neuroscience of loving music
Humans are musical animals four million years in the making, explained by music expert Michael Spitzer.
▸
8 min
—
with
Michael Spitzer
High Culture
The most controversial painting in Russian history
Created in the 1880s, “Ivan the Terrible and His Son Ivan,” which depicts a father murdering his son, divides Russians to this day.
The Past
Here is the most terrifying pterosaur ever discovered
Meet your new flying nightmare: Thapunngaka shawi.
Up Next
Life
5 ways CRISPR will reshape humanity and the world
A transformational tool for the future of the world.