What’s the weight of all human-made stuff—products, infrastructure, buildings—created each week? According to a new study published in Nature, the answer is roughly equivalent to the body weight of all people on Earth.

The study marks 2020 as a tipping point: This year, human-made mass (or anthropogenic mass) will exceed the planet’s total biomass, which is the mass of all living things. Currently, humans are churning out about 30 gigatons (30,000,000,000 tons) of material a year, and for decades that rate has been growing at a fast clip.

In 1900, for example, anthropogenic mass was just 3 percent of biomass. But every 20 years since, that ratio has at least doubled, gaining pace in more recent decades as industries have been using more geological materials like metals, minerals and rocks.

It’s hard to determine precise figures; imagine trying to weigh all the cars, trees, whales, butterflies, and bacteria across the planet. Making matters more complicated are water and waste.

These ballpark estimates highlight humanity’s heavy-handed impact on the planet. Our influence is so great that some scientists think we’ve entered a new epoch: the Anthropocene.

In 2000, the atmospheric chemist Paul J. Crutzen proposed that human activity has ushered us into a new geological epoch.

An epoch is a subdivision of geologic timescale. These broad categories help scientists think about changes on Earth over long periods of time. Currently, Earth is considered to be in the:

The Holocene Epoch began at about the time when the planet was warming, glaciers were melting, and humans were beginning the agricultural revolution. Scientists like Crutzen argue that it’s worth distinguishing the Holocene from our present human-driven epoch, the Anthropocene. (Anthro meaning “human”, cene meaning “new”.)

Proponents of the concept note that human activity has caused marked changes and damage to the planet, including the sixth mass extinction, the pollution of oceans and the atmosphere, and large-scale changes to the planet’s terrain through agriculture, dwellings and industry, which currently cover 70 percent of land. 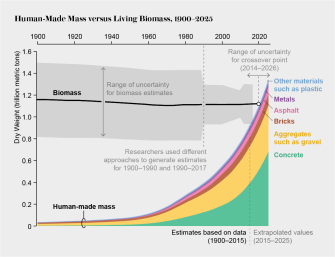 Not all scientists agree with the idea, and it hasn’t been officially accepted by the geological community. These critics generally argue that while humans have left a mark on the planet, it’s not significant or observable enough to warrant the creation of a new epoch. And some take issue with the political motivations that may underlie the concept.

“The proliferation of this concept can mainly be traced back to the fact that, under the guise of scientific neutrality, it conveys a message of almost unparalleled moral-political urgency,” wrote the German philosopher Peter Sloterdijk.

Still, the researchers behind the recent study said the findings give “a mass-based quantitative and symbolic characterization of the human-induced epoch of the Anthropocene.”

But never mind the Anthropocene or Holocene debate: It’s clear that humans are producing a ton of stuff, and that stuff eventually becomes waste. So, what are policymakers and scientists supposed to do with this information?

The recent findings don’t necessarily hold an answer, but they do highlight the single largest contributor to total human-made stuff: concrete. It’s the most widely used material on Earth, and also one of the main culprits in emissions of greenhouse gas.

In 2018, the Global Cement and Concrete Association issued six Sustainability Guidelines to encourage better practices for the 30 percent of the cement and concrete production companies it represents. Still, it’s unclear the extent to which the industry could make itself more sustainable.

One sustainable alternative building material to concrete is cross-laminated timber, which is as strong as concrete, but is able to store carbon, which could help lower the carbon footprint of buildings.

Tags
climate changeenvironmentinfrastructuremanufacturingsustainability
In this article
climate changeenvironmentinfrastructuremanufacturingsustainability
Related
Life
Strange life forms create an “alien” ecosystem in an abandoned uranium mine
Slimy biofilms made up of bacterial and eukaryotic life forms have taken over an abandoned, flooded uranium mine in Germany.
The Present
Climate change is altering the chemistry of wine
Smoke taint from wildfires is gross, even to wine amateurs.
Life
Our antidepressant drugs are affecting animals and ecosystems
A toxicologist explains the impacts of antidepressants on fish — and no, they’re not getting any happier.
Hard Science
200 years of exploring Antarctica
What we’ve learning from the world’s coldest, most forbidding, and most peaceful continent.
Life
Most of the seafloor is a thick graveyard of ooze
Each year, several trillion pounds of microscopic silicon-based skeletons fall down the water column to pile up into siliceous ooze.
Up Next
Strange Maps
How Europeans wear wedding rings, and what it says about them
For a purely binary choice, wearing a ring either on the left or right hand can say a lot about the wearer.