‘Tis the season to be shopping. Across the country, Americans are flocking to malls, outlets, department stores, as well as online retail sites to get their loved one’s gifts this holiday season.

But this ritual of consumption has had a devastating effect on the planet, and particularly when it comes to fashion. The fashion industry is responsible for an alarming 10 percent of all of humanity’s carbon emissions, thanks largely to the business model known as “fast fashion” that has come to dominate this century. 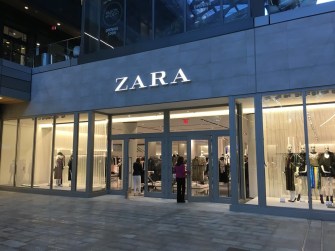 Back in the 1980s, the average American only purchased about 12 new articles of clothing every year. But in 1993 the North American Free Trade Agreement (NAFTA) made it much easier to import clothing by abolishing a quota system that had limited the number of items that could enter the U.S. and giving rise to fast fashion. The aim of this model is to make trendy clothes off the runway quick, cheap, and disposable. Think retailers such as H&M and Zara. They make their money by squeezing the time between trends, frequently filling their stores with new collections of cheap clothing that breaks down quickly enough for shoppers to come in for the next collection. In 2016, The Atlantic reported that the average American buys 64 new articles of clothing per year.

Of course, fast fashion has democratized fashion by making clothing more affordable and giving rise to greater variety. But this comes at a grave environmental cost. 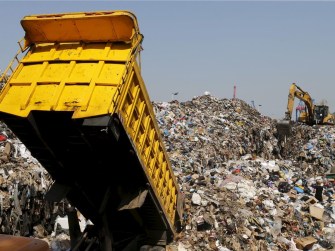 Making Fashion is an Environmental Disaster

In 2015, textile production contributed to more CO2 emissions than all international flights and maritime shipping combined. For instance, making one pair of jeans produces as much greenhouse gases as driving a car more than 80 miles.

This has to do with the materials used in the production process.Take the water-intensive crop cotton for example. It takes 2,700 liters of water to make a single cotton shirt, enough for the average person to live on for two-and-a-half years. Worse yet are synthetic fabrics like polyester, spandex, and nylon, which use nearly 342 million barrels of oil. According to World Resources Institute, producing polyester — a kind of plastic found in around 60 percent of garments — emits two to three times more carbon than cotton. Furthermore, washing these clothing items sends as many as 500,000 tons of microplastics into the ocean each year. That’s estimated to be about the equivalent of 50 billion plastic bottles. Overall, microplastics are estimated to compose up to 31 percent of plastic pollution in the ocean.

Another popular fabric used is viscose, a silky material that comes from fiber derived from wood pulp using extremely unsustainable and chemically intensive production methods. As much as 70 percent of the wood harvested is wasted while the other 30 percent ends up in the garments that we wear.

Furthermore, making and dyeing textiles involves the use of toxic chemicals which often are discarded by being dumped into lakes, streams, rivers, and ditches poisoning local communities. Garment manufacturing is responsible for 20 percent of all industrial water pollution around the globe and ranks in as the world’s second-largest polluter of water.

Finally, there’s what happens to the clothes when we are done with them. Although we are buying more clothes than ever before, we are keeping them for half as long. Shockingly, 85 percent of all textiles are trashed each year, ultimately ending up in a landfill or incinerated. The average American throws away 80 pounds of clothes per year. That’s about one garbage truck of clothes being burned or sent to landfills every second!

Even if you donate your clothes, they still often get dumped. What charities can’t sell or give away are sold by the ton to buyers in the developing world and still end up in landfills in those countries. Perhaps you’ve seen in-store recycling bins with retailers like H&M implying that the old clothes you bring in will be recycled to make new clothing. But less than one percent of their clothing is actually recycled to make new clothing. That’s because the blend of fibers that make their clothes don’t break down easily.

What Can Be Done

Maybe the most important thing we can do is to simply buy less stuff by wearing the clothes that we already have for longer. Incredibly, by wearing one item of clothing for 9 months longer a person can actually reduce his or her carbon footprint by 30 percent. Some companies, such as Patagonia, actually ask that you send in a damaged item of clothing for free repair rather than tossing it and buying something new.

Another thing you can do is to thrift shop. If everyone bought one used item instead of new this year, the amount of CO2 emissions saved would be equivalent to removing half a million cars from the road for a year. Finally, as the holiday season is in full swing and many are still scrambling to buy gifts for loved ones, you might consider gifting experiences or something hand-made rather than store-bought garb.

10 mind-bending books on the nature of time

Why does time flow in one direction? Why do humans perceive time so differently than it really is? Is there really a difference between the present, the past, and the future? These books explore these questions and more.