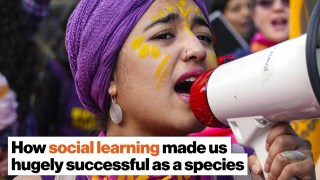 How social learning made us hugely successful as a species

Nicholas Christakis: We are very unusual as a species in that not only do we have the capacity to learn-- many species do this. A fish in the sea learns that if it swims towards the light it will encounter prey there. We also have the capacity for social learning, which itself is unusual and interesting-- that is, we can learn from each other. And social learning is extremely efficient. For example, I can put my hand in the fire and learn that that's hot and pull my hand out. So I have gotten some benefit of knowledge, but I've paid a price. Or I could watch you put your hand in the fire, get almost as much benefit learning that fire is dangerous, and pay none of the price. So watching from you and learning from you by social learning and imitative learning is extremely efficient. But we not only do that, we teach each other.

We affirmatively set out to teach each other stuff. This is very rare in the animal kingdom. In fact, this aspect of our species lies at the core of our capacity for culture, which is the capacity to transmit knowledge across place and time. So we carry with us the benefits of all the innovations and all the learning that had been done by all prior members of the human species, carried forward unto this day. And when we learn something new, we transmit it laterally to other people. This fundamental quality of teaching also actually has political implications. Because if we are actually to effectively teach and learn from each other, we must create environments that support free and open expression.

Some of the most foundational liberties that we have that are encapsulated in the Bill of Rights, by some kind of implicit or deliberate insight by the founding fathers, actually speak to these fundamental qualities that we evolved to have. For example, the freedom of assembly is enshrined in constitutions around the world, including ours. The freedom of speech is enshrined in our constitution, and many others as well. These are innate desires that we have to talk to and learn from each other, To assemble and connect with each other. And they are seen as fundamental political principles and have been since our founding.

Find new inspiration with these time-tested approaches to creativity