“Every liberal loves the figure of Socrates,” Jonathan Rauch writes in his 1991 book Kindly Inquisitors, “who has taught so many people the method of skeptical inquiry and the importance of intellectual humility—of trying to keep in mind the difference between what you know and what you just think you know.”

But in the social media age, is Socrates—who died proclaiming, “I know nothing except the fact of my own ignorance”—still the liberal ideal? Or has the internet ecosystem destroyed intellectual humility by rewarding echo chambers, public commitments, and takedowns over earnest truth-seeking and discovery? 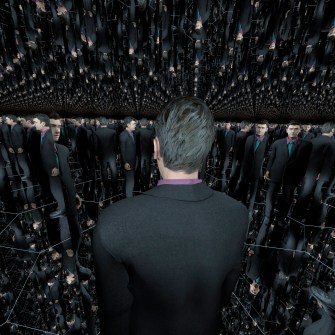 An echo chamber is an infinity of mirrors. Photo: Robert Brook via Getty Images

“One way the internet distorts our picture of ourselves is by feeding the human tendency to overestimate our knowledge of how the world works,” writes philosophy professor Michael Patrick Lynch, author of the book The Internet of Us: Knowing More and Understanding Less in the Age of Big Data, in The Chronicle of Higher Education. “The Internet of Us becomes one big reinforcement mechanism, getting us all the information we are already biased to believe, and encouraging us to regard those in other bubbles as misinformed miscreants. We know it all—the internet tells us so.”

In other words, the internet encourages epistemic arrogance—the belief that one knows much more than one does. The internet’s tailored social media feeds and algorithms have herded us into echo chambers where our own views are cheered and opposing views are mocked. Sheltered from serious challenge, celebrated by our chosen mob, we gradually lose the capacity for accurate self-assessment and begin to believe ourselves vastly more knowledgeable than we actually are.

Could we begin to change the social media economy so that it rewards good-faith discourse, discovery, and the free exchange of ideas rather than epistemic arrogance and tribalism?

But it’s not just the social reinforcement mechanism of like-minded crowds that is killing intellectual humility. It’s also our own digital trails—the permanent records of our previous opinions.

“Here’s another way that Twitter may harm democratic debate,” New York University Stern School of Business professor Jonathan Haidt tweeted in January 2020, attaching a couple pages from Robert Cialdini’s seminal marketing book Influence. “Publicly committing to an answer makes people less receptive to info suggesting they were wrong.” In the excerpt from Influence, Cialdini summarizes an experiment by social psychologists Morton Deutsch and Harold Gerard in which three groups of students were shown a set of lines. One group was asked to write down their estimates of the lines’ length and turn their estimates in to the experimenter; the second group was asked to write down their estimates on a Magic Pad, then erase the pad before anyone could see; and the third group didn’t write down their estimates at all. After the students were shown new evidence that suggested their original estimates were inaccurate, Cialdini writes:

The students who had never written down their first choices were least loyal to those choices. . . . [B]y far, it was the students who had publicly recorded their initial positions who most resolutely refused to shift from those positions later. Public commitment had hardened them into the most stubborn of all.

Thanks to social media, most of us have publicly committed ourselves to our opinions. Our feeds are years of publicly published diary entries with our frozen-in-time thoughts on politics, news, relationships, religion, and more. Savvy social media users worry about how their digital trails will affect their future job prospects, but few people worry about how their digital trails might be affecting their own minds. By committing ourselves publicly to our present opinions, we may be hardening ourselves to future information that would otherwise change our minds—and thereby foreclosing upon our capacity for intellectual humility. 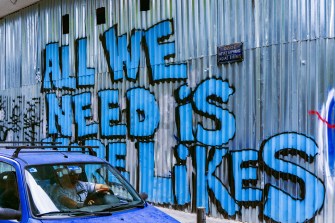 All we need is more likes. Photo by Daria Nepriakhina on Unsplash

Even if some people are open to changing their minds, they’re unlikely to come across the kind of content that will provoke earnest discovery and growth on social media. With its currency of shares, retweets, likes, and ratios, the social media economy picks losers and winners. It rewards atta-boys and pile-ons; memes and humiliations; short, brutal interactions where a winner “crushes” a loser.

“Twitter is obviously full of the notion that what we should do is condemn those who disagree with us,” University of California, Berkeley, political scientist David Broockman tells Vox in an article on How to Talk Someone Out of Bigotry. Broockman and his fellow researchers are experimenting with “deep canvassing,” a technique of patiently engaging voters in 10-minute, in-person conversations while listening nonjudgmentally. Unlike social media interactions—which are brief, performative, and often judgmental—deep canvassing has been shown to be successful at changing people’s minds.

The new research shows that if you want to change someone’s mind, you need to have patience with them, ask them to reflect on their life, and listen. It’s not about calling people out or labeling them fill-in-the-blank-phobic. Which makes it feel like a big departure from a lot of the current political dialogue.

In other words, the kind of dialogue that actually has a chance of changing people’s minds—of breaching their epistemic arrogance and forcing them to confront the limits of their own knowledge—is precisely the kind of nonjudgmental, long-form, authentic discourse that is not rewarded in the current social media economy.

So the big question is: Could we apply lessons learned from deep canvassing to social media? Could we begin to change the social media economy so that it rewards good-faith discourse, discovery, and the free exchange of ideas rather than epistemic arrogance and tribalism?

Chamlee-Wright, a former economics professor and provost who has written extensively about discursive ethics, explains why intellectual humility is the first basic design principle of a good conversation.

[T]he world is an incredibly complicated place. None of us can ever have the full lock on truth. We can only see the world from a particular vantage point. And that means that our knowledge is going to have special insight because of our vantage point, but it’s also going to be limited because of our vantage point. And so that limited knowledge that we can have about the world means that we must enter into any conversation with a deep sense of humility, because I need you to help me fill in my knowledge gaps. Right? And you need me.

Consider this: Social media presents limitless possibilities for good, learning conversations—like deep canvassing—between strangers across the globe. If each social media user approached online interactions from a position of deep intellectual humility, recognizing that every other user represents an opportunity to fill knowledge gaps and grow, our social networks could become an unprecedented engine of human progress—instead of the drag-down into tribalism they currently seem to be.

The author of classics like “A Farewell to Arms” and “The Sun Also Rises” is known and loved for his simple yet effective writing style. Here’s how to imitate it.

Humanity’s most advanced tech still hasn’t unraveled the mysteries of the human mind. Can brain scans show us how we store memories?
▸
with
Lisa Genova
The Present

Dating apps have made it easier than ever to find a partner. Paradoxically, the ease of finding matches means some remain perpetually single.
Smart Skills

New Year’s resolution for 2022: Five ways to have better conversations

Next year is the perfect time to have better conversations!
Up Next
Health

Who’s profiting most from the coronavirus outbreak?

Stock markets may be plummeting, but that doesn’t mean the spread of COVID-19 is hurting everyone’s bottom line.