You can live in a country for your entire life, but due to some circumstance of your birth or political machinations outside of your control, you can be denied an education, healthcare, employment, legal rights, any kind of identification, and many other things that your peers may have access to. Statelessness may live entirely in the realm of abstract bureaucracy, but it can have some very real and concrete impacts on your life.

The United Nations High Commissioner for Refugees (UNHCR) reports that roughly 12 million people across the globe do not belong to any state. Some gave up their statehood willingly, others had it taken away from them by a vindictive government, and others just never had statehood in the first place.

How do people become stateless?

Often, statelessness arises due to the quirks of international law. For instance, many states offer citizenship based on either jus soli — where individuals born in a given nation acquire that nationality — jus sanguinis — where citizenship is inherited from one’s parents — or some combination of the two. When these systems have cracks, sometimes the result can be statelessness.

Another major source of statelessness is due to sexism. Twenty-five states also don’t permit mothers to pass on their nationality in the same way that fathers can, as is the case in Iran, Qatar, and Kuwait. When the father is stateless himself, unmarried to the mother, or has died, among other reasons, offspring in these countries suddenly find themselves without a nation.

The main source of statelessness, however, arises due to states discriminating against a particular group. The Syrian government, for example, stripped hundreds of thousands of Kurds of their statehood in a 1962 census, claiming that the Kurds had immigrated illegally, and sparking considerable international criticism. Today, the Myanmar government is perhaps the biggest contributor to the modern stateless population with their refusal to grant the Rohingya people citizenship. The Rohingya have been present in Myanmar since the 8th century, but the state only offers citizenship to 135 legally recognized ethnic groups, of which the Rohingya do not belong. Instead, Myanmar appears to intend to expel its Rohingya population. 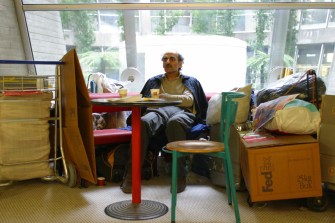 Albert Einstein had a very interesting political history, bouncing from German to Swiss back to German to U.S. citizenship. However, in between the years in which he was a German and Swiss citizen, Einstein was stateless for five years. Though he was born in the German Kingdom of Württemburg, Einstein renounced his citizenship in order to avoid military service in 1896. Five years later, he would be granted Swiss citizenship.

Mehran Karimi Nasseri was not so lucky. He has been allegedly stateless since 1977, and 18 of those years he spent living in Charles de Gaulle airport. Nasseri claims to have been expelled from Iran, his home country, for protesting the Shah. He decided to move to Britain, but the travel documents that listed him as a refugee — which provided him a legal basis to seek citizenship in Europe — were stolen during a layover in France. Nasseri continued onto Britain regardless and was returned to France by British authorities. French officials intended to deport him but could not; Nasseri had no country of origin to be deported to.

A French court concluded that Nasseri had entered the country legally, but he could not leave the airport. It was only until 2006 that Nasseri left Charles de Gaulle due to an unknown illness requiring his hospitalization. The 2004 film The Terminal used Nasseri’s story for inspiration.

Garry Davis voluntarily renounced his U.S. citizenship in 1948, partially due to his brother’s death in World War II and his own participation in the war as a B-17 bomber. Davis interpreted Article 13(2) of the Universal Declaration of Human Rights as allowing him the rights of a world citizen. In his later years, he would start the World Service Authority, a non-profit with the goal of promoting world citizenship and a world government. He also developed world passports, which he allegedly used to gain entry into some countries (though he was detained many times).

Though these examples highlight some of the more whimsical ways one can lose their statehood, most stateless persons suffer a significant amount of abuse because of their lack of statehood. The UNHCR has stated its goal to end statelessness by 2024 by a variety of actions, among them:

It’s a lofty goal, but one can’t help but to imagine that the stateless will always be with us.

Soviet researchers studied crime through a Marxist-Leninist lens. Under Lenin, a humanitarian approach to criminality briefly emerged, but dissipated when Stalin rose to power.
Videos

The blazes may be the first step in a hellish downward spiral.