A lot of people may assume that having someone covertly slip something into your drink or food only happens to other people. But 56% of women and 44% of men, know from personal experience that’s that’s not so. That’s according to statistics gathered in surveys conducted by Alcohol.org and published as a collection of infographics called SPIKED. They present the experiences of people who’ve experienced this nasty personal violation — or think they have, since it’s often hard to be sure. Tampering with drinks and food is often the prelude to sexual assault, and alcohol is far and away the most common medium in which to hide date-rape drugs such as Rohypnol, GHB, and ketamine, and other substances. 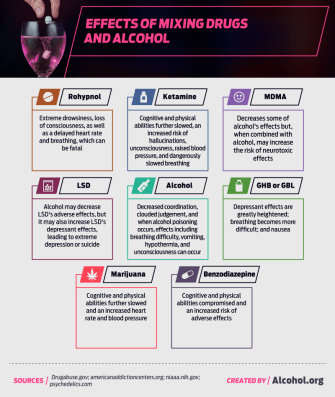 The dangerous chemistry of spiked drinks

In addition to the horror of being sexually assaulted, some substances mixed with alcohol are also dangerous on a strictly chemical basis. 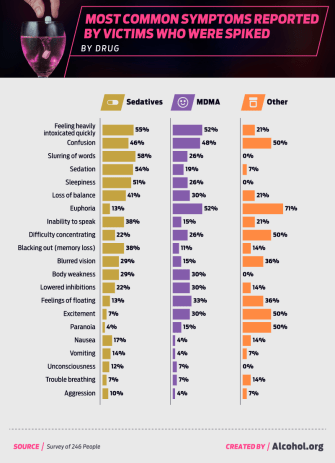 How can you tell you’ve been dosed?

After consuming a spiked drink, it’s common to become so confused that it’s hard to know what’s going on at all during an attack, and often equally difficult later on to remember if something even happened. This is one reason why rape and sexual assaults are likely under-reported.

There may be symptoms of spiked substances that can provide a telltale clue if a violation is occurring or has occurred, even when there’s no memory of it and only a troubling sense of something wrong. Alcohol.com’s respondents listed these. 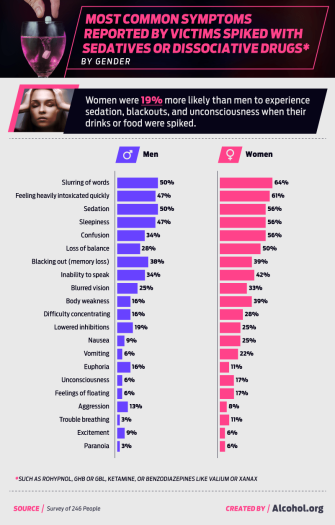 The survey got into more detail, looking at symptoms specific to sedatives and MDMA (ecstasy). 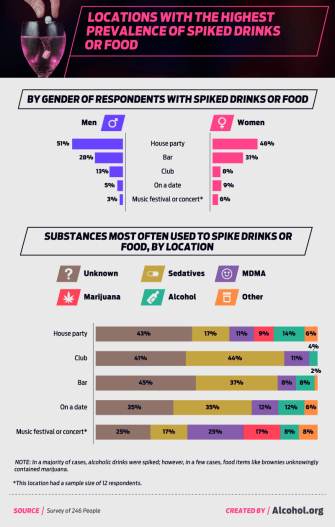 Where are you most likely to get spiked?

You’re most likely to run into problems, not surprisingly, at house parties, mostly unsupervised gatherings that can attract friends and strangers alike. Next up on the list is bars, where spikeable drinks are continually freely flowing and easily sidetracked for dosing. Alcohol.org also asked respondents to name the substance most likely to be used different places, and Unknown is the chilling top answer by a considerable amount. Again, it’s hard to know what’s just happened. 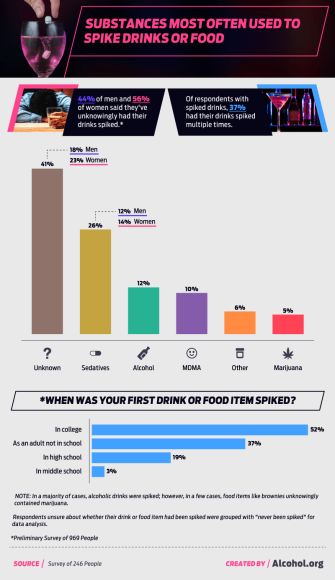 Drilling down a little further, people were asked their opinions about what substances are being used most in spiking, with Unknown again the “winner.” Respondents who’d had food or drink spiked were asked when it first occurred. (37% had reported multiple experiences with being dosed.) 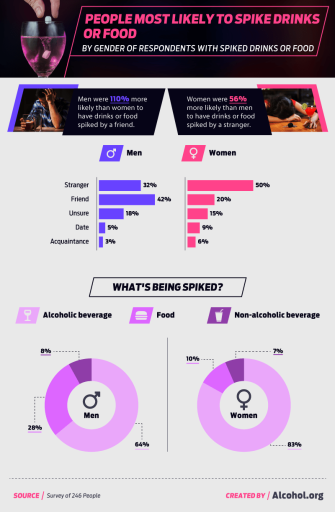 It’s easy to tell who to look out for, right? Nope.

Obviously, strangers are significantly more likely to spike one’s drinks and food than others. But a surprising number of respondents, men in particular, reported being dosed by people they viewed as friends. Most unsettling may be that about 15% of respondents weren’t even sure who altered their food and drink. 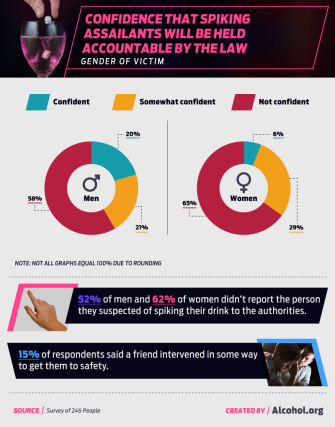 Perpetrators often get away with it

A strong majority of people surveyed — 65% of women and 58% of men — said they don’t expect the law to be of much use in going after the criminals. In addition to the usual difficulties female victims continue to experience when they attempt to report sex crimes, there’s the additional problem of substance-clouded memories being undervalued by authorities. In fact, a stunning 62% of women, and 52% of men, didn’t even report being attacked. A small number found their friends on the scene to be helpful.

It’s clear that staying safe is up to each of us. Your best bet is to keep a close eye on your drinks and food as they make their way to you, and don’t ever leave them unguarded without at least being under the watchful eye of someone you know you can trust.

The biology behind your office’s air conditioning war.
Starts With A Bang

Before gunpowder was introduced to the West, medieval Arabs devised grenades using crockery.
Up Next
Thinking

Why going for a walk, alone, is a deeply philosophical act

Think walking is void of philosophy? Nietzsche and Gros are here to say you’re wrong.