After successfully launching its Falcon Heavy rocket into space early Tuesday morning, SpaceX used a net-outfitted boat to catch part of the rocket’s nosecone, known as a fairing. It marks the first time SpaceX has successfully used the boat – nicknamed “Ms. Tree” – to catch a fairing; a few previous attempts failed.

A rocket’s fairing is a structure that protects the payload during launch. Once in space, Falcon Heavy’s fairing breaks into halves, which then slowly descend back to Earth using special parachutes. The goal is to guide these halves to the net-outfitted boats, because otherwise the fairings would land in the ocean where saltwater wreaks expensive damage on the hardware.

“Imagine you had $6 million in cash in a pallet flying through the air, and it’s going to smash into the ocean,” SpaceX CEO Elon Musk said during a press conference last year. “Would you try to recover that? Yes. Yes, you would.” 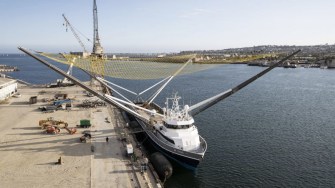 A SpaceX boat conducts a test in the Atlantic Ocean.

SpaceX said it spotted the other fairing half floating in the ocean near Ms. Tree. The company plans to take both halves back to shore and inspect them for potential damage. Ideally, the halves will be refurbished and used on a future mission.

SpaceX was also able to safely land both of Falcon Heavy’s reusable side boosters at the launch site, but the rocket’s center core failed its landing out in the Atlantic Ocean. But the successful retrieval of part of Falcon Heavy’s fairing is a promising sign, considering the hardware represents about 10 percent of the rocket’s $62 million total cost. Currently, nearly all of the Falcon Heavy rocket is reusable, except for its second stage.

Catching the fairing wasn’t SpaceX’s only success on Tuesday: Falcon Heavy also successfully deployed into space 24 satellites, an atomic clock, a solar sail and the ashes of 152 people. Musk called it the company’s “most difficult launch ever.”

Preventing scurvy is not just a problem in the Antarctic.
Up Next
Health

Just how many cups of coffee is it safe to drink a day?

Our favorite over-the-counter medication has its limits.