It’s not often that scientists discover an entirely new property of light. The last time was in 1992, when researchers figured out how to twist light. Now, however, scientists at Spain’s Universidad de Salamanca and the University of Colorado in the U.S. have uncovered a new thing light can do — they describe it as “self-torque.”

The newly discovered property may one day provide scientists a way of manipulating very tiny objects and improve light-based communication devices, along with myriad other uses similar to those already being explored for twisted light. 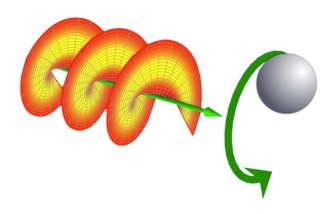 Orbital angular momentum in a light beam and a particle within it. Image source: E-karimi / Wikimedia Commons

Twisted light beams have to do with a property called “orbital angular momentum” (OAM). It’s a subset of angular momentum. Imagine an object attached to a string swinging round and around a pole to which the string is connected — the force with which it goes around the pole is its angular momentum. Technically, it’s calculated in the other direction, if you will: It’s the measurement of the amount of force it would take to stop the object from circling the pole.

In 1932, scientists realized that a perpendicular cross-section of a light wave revealed oscillating mini-waves within it. While typically these mini-waves oscillate together, that’s not always the case. In some light beams, researchers found mini-waves out of phase with each other and rotating around the larger beam’s center. A particle hit by such a beam of light will orbit that center like a planet orbiting a star. Hence “orbital angle momentum.” At the time, these weird light waves were considered to be organically produced by oddly behaving electrons spinning around nuclei.

In the 1970s, lasers allowed the creation of “vortex beams,” with “vortex” here meaning a hole in the middle of a light beam. Now we know that it’s not really a hole, but rather an area where out-of-phase mini-waves overlap and cancel each other out as they spin around the center of a beam. Though it wasn’t realized at the time, what the scientists were seeing was a manifestation of OAM.

In 1991, physicist Robert Spreeuw in Han Woerdman’s lab at Leiden University in the Netherlands began dreaming up ways to deliberately create light beams with OAM. He presented his ideas to his team during a coffee break. “The first reactions were a bit skeptical,” Spreeuw says. “But we kept thinking about it and, bit by bit, it started to look more realistic.”

In 1992, Woerdman, working with colleague Les Allen, successfully twisted light and demonstrated how a photon within it would share the beam’s OAM. In 1993, they published their technique of sending a light beam through a lens shaped like a seashell to produce twisted light.

In such a beam, mini-waves rotate around the center of the beam as a helix. If you shine the beam onto a table, or make a perpendicular cross-section, it looks like a donut: Light around a seemingly empty center.

Since then, twisted light beams have proven extremely useful as optical tweezers with which microscopic particles can be captured and manipulated. In the area of communications, they’ve enabled higher data rates by allowing the manipulation of light characteristics such as color, intensity, and polarization. They also may make possible finer-grained medical diagnostic tools, the stimulation of atoms and molecules into exotic states, and controllers for micro- and non-scale machinery.

The researchers behind the new discovery had been combining pairs of waves with the same OAM by firing them into a cloud of argon gas, from whence they emerged as a single twisted beam, having overlapped and merged within the cloud. The scientists started wondering what would happen if they tried the same thing with two donut beams that had different OAMs and that were out of sync with each other by a few quadrillionths of a second.

The resulting beam was something surprising and unpredicted. It corkscrewed around its center, more tightly — and so, faster — at one end than the other. A photon at the front of the beam would actually be traveling slower than one at the back. The conclusion was that not only did the light beams have OAM that allowed them to twist, but that the application of one to another in the right way produced a force that could affect the speed of the waves’ twisting — they named that force “self-torque,” as a previously unsuspected type of push that can alter the speed at which light waves twist.

Cross-sectioned or shined on a flat surface, a beam with self-torque looks like a French croissant instead of a donut. One of the scientists, Kevin Dorney, muses to National Geographic, “You wouldn’t expect from adding donuts that you would get a croissant.”

Twisted light, already so useful in so many ways, just gained a new level of malleability.

Less than 50 percent of Americans say they're "extremely proud" to be American.