Light is a well-studied area and it’s not easy to make a transformative discovery in this field, but Irish scientists from Trinity College Dublin have done just that. They discovered a new form of light which is characterized by unique angular momentum.

What is angular momentum? It’s a measure of how much each photon in a beam of light rotates around its own axis. Physics Professor John Donegan explained that “when light from the mirror hits your eye in the morning, every photon twists your eye a little, one way or another.”

Before you wonder if you understand this enough to get excited about it, consider that these findings will impact what we know about the very nature of light.

Professor Paul Eastham from Trinity College Dublin elaborated: ”What I think is so exciting about this result is that even this fundamental property of light, that physicists have always thought was fixed, can be changed.”

The discovery was made by passing light through special crystals to create a light beam with a hollow structure. The researchers also devised an instrument that measured the beam’s angular momentum as it went through the crystals.

This figure illustrates some of the findings by the scientists: 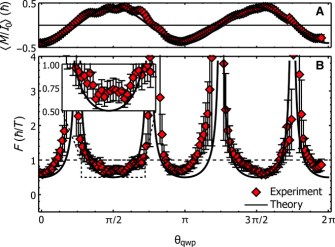 (A) Average of the total angular momentum J1/2 per photon, in beams comprising a variable superposition of its eigenstates |j = 1/2〉 and |j = −1/2〉. The solid line is the predicted result, corrected for the measured visibility of the interferometer. (B) Measured fluctuations in the angular momentum current quantified by its Fano factor. At the minima, the noise is predominantly shot noise reflecting the discreteness of angular momentum. The corresponding charge goes below ħ and approaches the expected value of ħ/2, showing that the quantized angular momentum of the photon is a fraction of ħ. The solid lines show the predicted result in the ideal case, with full visibility and no classical noise.

Practical applications of this discovery will be felt in the field of telecommunications, with the development of new kinds of secure optical communications.  The newly found photons are harder to decode and can potentially deliver data quicker and more privately.

The paper was published in Science Advances and can be read online here.

Tags
discoverylightphysicsscientist
In this article
discoverylightphysicsscientist
Related
The Well
This is what the fourth dimension looks like
Left–Right, Back–Forth, Up–Down. What’s the fourth dimension?
▸
3 min
—
with
Brian Greene
The Past
Here is the most terrifying pterosaur ever discovered
Meet your new flying nightmare: Thapunngaka shawi.
The physics of entropy and the origin of life
How did complex systems emerge from chaos? Physicist Sean Carroll explains.
▸
6 min
—
with
Sean Carroll
The Universe in 90 minutes: The Multiverse, time, free will, God, & more
Everything you ever wanted to know about the Universe, explained by physicist Sean Carroll.
▸
1:33:47 min
—
with
Sean Carroll
13.8
The boundaries between sciences
Nature is a whole. The sciences should be, too.
Up Next
Surprising Science
We May Soon See the End of HIV
Closing in on 35 years since HIV was first discovered, medical science is now starting to see the possibility of a day when HIV will be curable. In fact, new research has developed several possible strategies which could eliminate the virus from the body. But challenges remain.