Fatema is an engaged, curious and driven entrepreneur with experience spanning over 18 years in successfully building startup businesses to further developing large organizations. Her experience spans across the Aerospace,[…]
Go to Profile 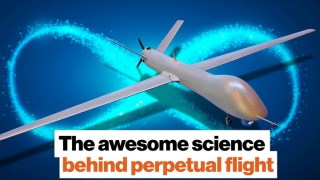 Modern life hinges on satellite connectivity. President of Kraus Aerospace Fatema Hamdani explains how the science of perpetual flight is unfolding, and how to defend satellites and drones from enemy fire.
▸
8 min
—
with
Fatema Hamdani

FATEMA HAMDANI: So when we look at UAV platforms—or drones as we call them commonly—there are multiple different types of platforms. There are rotary devices, or multi-rotor, and then there are fixed-wing UAV platforms. Fixed-wing covers the larger use cases where you're talking about flying them anywhere from 2,000, 16,000 going up to 35,000 feet, which is the regular airspace under which aircraft operate as well. And fixed-wing UAVs are categorized by their size and weight starting from Group 1, which is the smallest, going up to Group 5, which are the larger ones which carry way larger payloads and might also be used for offensive purposes—they might carry missiles and other things. So these groupings—actually we, for example, Kraus Aerospace, it's a private company, not defense, so we only play within the Group 1 to Group 4 platforms, where they're primarily focused—or Group 3 platforms—they're primarily focused on intelligence, surveillance, and reconnaissance, or payload that provide things like communication, signal intelligence. You are talking about radio relay or payloads that do lidar or electrical optical or infrared camera. So any kind of visual payloads that allow and facilitate for decision-makers to make rapid decisions on the ground.

So this conversation is very timely. Everybody is hearing about Space Force and what the government is doing there, there are articles all over; DARPA is talking about it and DARPA is investing in it. Lockheed Martin, Raytheon, others are kind of coming in together to help us. So, essentially, if you take a look at it, we are fairly dependent on the satellites that are out there—to launch a satellite, to repair a satellite, to do maintenance around a satellite, this is an extremely expensive proposition. And those are also very easy to take out, so if there is a certain missile that attacks—and there are four or five countries in the world that actually have anti-satellite missiles—that could take out a satellite. But that's not the only way of crippling a satellite. You could do jamming, you could do multiple things where the receivers are, the signal, other components that are associated with satellites—you mess with any of that, it kind of takes out a satellite. So, for example, I think it was back in January of 2016 that—we have 13 or 14 GPS satellites out there and we were taking down one of them, and there was a really minor 100-millisecond or 300-millisecond difference in sync, because there were some components that were introduced that caused a lapse in the time, and because from a GPS or when you use GPS to guide you, time is extremely important, and syncing up of that—wherever you were before and where you are now, that's how GPS can guide you. And so if there is a break in that sync you suddenly will go off and we experienced that in January of 2016 for a very small period. But that shows you even the smallest things can literally bring down an entire country to their knees when some of these critical satellites are taken down.

But when you think of persistent platforms or long-endurance or nonstop platforms, redundancy is a key component that actually has to be covered across multiple of these components: redundancy in communication, redundancy in energy sources—that's where the multiple energy sources come in. So we utilize a RAM air turbine which essentially would drop down and can utilize the wind energy to give that push that the aircraft might need to carry it through the night, so that when the solar panels take over they're able to charge. We would use similar batteries like lithium-ion, which goes into a Tesla, or a lithium polymer battery. Then combine that, and what we have done is we've written code that allows us to detect thermals or uplift, similar to what a bird would do. Birds don't get tired, they soar, they keep soaring and they identify thermals, and that's how they do it.

We've captured that from an A.I. perspective and taught the machine or the autopilot to detect these thermals algorithmically using a linear quadratic equation Kalman filter. What that means is even the slightest movement that happens on the wings, it's detected, and then the center of that thermal is detected so that the aircraft can stay up pretty much with no amperages used from the lithium-ion battery or the lithium polymer battery that is on board. So now what you've done is you're utilizing natural energy sources for nonstop performance.

Now, if you take it a step further—and you hear a lot about this—which is swarm intelligence. So the likes of MIT and others, and we're doing work within the space—all of this is nature. How can you utilize what's happening in nature and mimic that with technology? So when we spoke about thermaling or using uplift to keep the aircraft flying without actually using external energy, we've learned from the birds. Now swarm intelligence is how actual insects and others in a group, in a swarm, communicate and function together.

If we are able to bring that technology in, in different ways—so swarming can happen in multiple ways when you're talking about manned or unmanned platforms. So swarm can be your coordinating with your land platform, with your air platform, with your space platform and all of them are functioning based on a specific mission that's been defined for them. Or, what I was talking about earlier, identifying thermals or when we talk about high altitude pseudo satellite there are no thermals there, but what we have there is what is called stratospheric wind. So we can use that wind, the aircraft it's similar to when you stand against wind coming your way and you balance it by moving forward, we can actually linger up there at 65,000 to 70,000 feet using that stratospheric wind and keeping our aircraft up. So when you're doing that you can then also communicate between multiple different platforms that you might launch where they would actually essentially be sitting at 65,000 to 70,000 feet and they're all coordinating amongst themselves.

First, to identify these natural energy sources, second to communicate amongst themselves and create a mesh network. So now you're suddenly creating an alternative—which is a very viable alternative—for satellites that don't have to be actually brought down. They can be kept up for as long as you want.

And then you're utilizing multiple sources like nuclear and others to keep it up for nonstop and create a mesh network. That's one of the other things that Space Force's vision is, as well, to create some sort of a mesh network that counters what the enemies can do to our satellites. Because if you have one single target, it is easy to take it down. But if you have multiple, even if one is taken down the others will take over. So you're suddenly safeguarding how you're providing communication, wireless services.

Why only individual thinking can reunite America