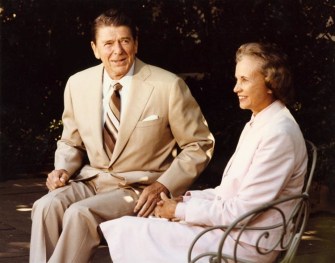 In a letter to The New York Times, Justice Sandra Day O’Connor revealed that she has dementia—likely, Alzheimer’s—and is withdrawing from public life.

“Since many people have asked about my current status and activities, I want to be open about these changes, and while I am still able, share some personal thoughts,” Justice O’Connor wrote. “While the final chapter of my life with dementia may be trying, nothing has diminished my gratitude and deep appreciation for the countless blessings in my life.” 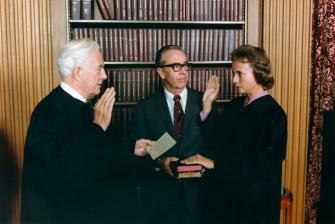 Photograph of Sandra Day O’Connor being sworn in as a Supreme Court Justice by Chief Justice Warren Burger. Her husband John O’Connor looks on. Septermber 5, 1981

For almost 25 years, O’Connor was a key swing vote in many Supreme Court decisions, including Roe V. Wade, but her views were largely moderate. She was nominated by Ronald Reagan in 1981, and approved by Congress. In 2013, she performed the marriage of a gay couple in the halls of the Supreme Court itself, for the first time. This marked a shift in her politics to the Left after she retired. 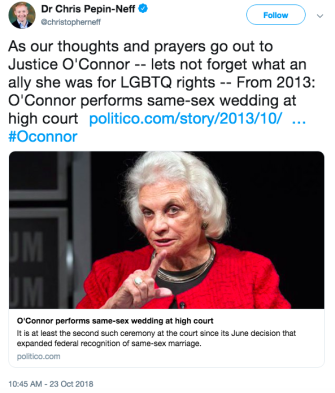 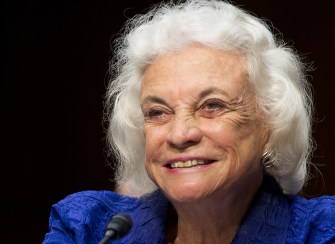 She held the mantle of a qualified Supreme Court Justice quite well, even undergoing a mastectomy for breast cancer in 1988. “The best thing about all of this is that I had a job to go to,” said Justice O’Connor, to The New York Times. “I didn’t miss anything, and it was hard, but I’m so grateful that I had my work to do.”

O’Connor retired from her position in 2005, to be with her husband John, who had Alzheimer’s as well. He died four years later.

“Women are as capable as men of handling all of the jobs, from start to finish, at state government level, and at federal government level. That’s very important that our citizens look at women as well as men and say, ‘Well, if we have to pick a new member of Congress, we can certainly consider Susan as well as Jim. They’re both capable of doing the job, and we’re going to evaluate both of them.”

Tags
healthjustice systempoliticsunited stateswomen
In this article
healthjustice systempoliticsunited stateswomen
Related
The bizarre history of exercise explained in 8 minutes
Harvard professor Daniel Lieberman debunks the ‘10,000 steps per day’ myth.
▸
8 min
—
with
Daniel Lieberman
Health
America’s maternal death rate: “This is a national crisis”
Black women are 3x more likely to die giving birth. Here’s one plan to fix that.
▸
7 min
—
with
Michael Dowling
Harvard professor debunks the biggest exercise myths
Exercise culture is crazy. But what you need to do is exceedingly simple.
▸
with
Daniel Lieberman
Mind hack: Revive your focus with this 12-minute exercise
A neuroscientist explains how to master your focus.
▸
7 min
—
with
Amishi Jha
Putin’s war: “The single biggest geopolitical mistake since 1989”
“This is much deeper than just ‘let’s figure out how we can get both sides to get along.’”
▸
15 min
—
with
Ian Bremmer
Up Next
The Present
4 psychological techniques cults use to recruit members
Hint: They hold off on talking about their alien god until much later.