To keep global heating below 2°C, the world’s appetite for meat must change.

This will mean reducing meat consumption in most developed countries and limiting the increase in developing countries. But how do you convince people to break the habit of a lifetime?

Our recent paper, published in the journal Appetite, looked at how “nudging” might help. This is an approach from behavioural psychology that aims to subtly change a person’s behaviour. In the same way a gentle nudge on the shoulder might alert you to something nearby, subliminal nudges in advertising or on signs help to affect the subconscious choices people make. To change a person’s diet, nudges could help them choose meat substitutes over the real thing.

It’s possible for people to still enjoy the taste of meat with alternatives – varieties of insects are high in protein, and their environmental impact is minimal. About 2 billion people already eat insects as part of their daily diet. But given that many people associate insects with dirt and disease, it’s not guaranteed that bugs will make the cut as a major source of protein in the future.

But plant-based meat substitutes are surging in popularity in many developed countries. There is now a range of plant-based products that attempt to mimic the texture and taste of a variety of meats using ingredients such as soy or peas. The market share of these products has grown significantly in recent years – and the market is projected to expand by 28% per year until 2030. Our recent study found that people who regularly work out and opt for high-protein diets are particularly interested in alternative sources that can deliver the same benefits as meat.

Despite this growth in plant-based substitutes, meat consumption is still predicted to rise around the world. So alternatives are not enough – behaviour has to change. 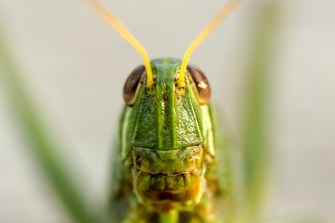 The face of protein in the 21st century?

Nudging people away from meat could include changing the layout of places where food is bought or eaten, or designing menus so that vegetarian options are given equal or greater prominence than meat dishes.

But the complexity of food choice means that these may not be as effective outside experiments. In the real world, what people choose to eat is driven by a whole host of factors including the smell or texture of food and cultural norms.

Nudges tend to work by targeting unconscious thoughts and behaviours. Many of our food choices tend to rely on this, through habit or convenience. You’re more likely to pick the option you’ve tried before and enjoyed, or that you know is easy to prepare, without carefully thinking about it. People remain reluctant to buy food that their partners or children may reject. So attitudes to meat and plant-based substitutes still need addressing to alter eating behaviour.

One area that shows particular promise is targeting people at specific stages in their lives. We found that older people would still want to eat foods which they had eaten as children. If children are given access to more plant-based proteins – and educated on their benefits for health and the environment – they might remain a valued component of their diet throughout their lives.

There are reasons to be optimistic that the dietary changes needed to limit global heating are achievable. Attitudes towards meat consumption are already changing, and there are plenty of options to try and encourage more people to pursue a diet that’s better for them and the planet.

Break into London Zoo? Illegal, but it would improve the London Circle Walk
Neuropsych

A clever neuroscience experiment shows that the “other-race effect” is likely due to a lack of experience and perceptual expertise rather than racism.
Neuropsych

Cognitive fatigue results from thinking too hard and long. Neuroscientists now believe they know why this occurs.
Thinking

Be more like Goldilocks.
Up Next
Starts With A Bang

The main ring of the 27-km circumference LHC carries the most energetic protons ever created in a laboratory on Earth. (Image credit: CERN / Maximilien Brice and Julien Marius Ordan)It’s not […]