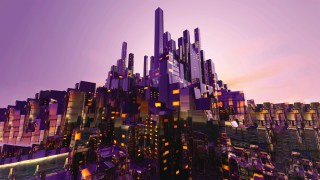 3 million people move to urban areas every week. How will we meet the challenge?

Cities of the future won't just be incredibly populated, they'll also be smarter than ever.
▸
3 min
—
with
Big Think

NARRATOR: How are we going to adapt to the growing pressures of overcrowding? That question is being asked here in my neighborhood and also in cities all over the globe.

SAMEER SHARMA: Globally, we are adding about three million people a week to the urban areas. That's the population of Chicago. So we're talking about as a global community creating more than 50 Chicago's every year. So as this process accelerates, we need a new global playbook for cities to be able to handle this influx of new citizens coming daily.

NARRATOR: How will we house all these people?

MAN: We're going to have to rethink habitats.

NARRATOR: How will we all get around?

MAN: We're going to have to rethink logistics, transportation...

NARRATOR: Welcome to Tokyo. City of the Future. By population, Tokyo is the biggest city on the planet. It's home to…

PERSON 1: Tens of millions of people.

NARRATOR: 38 million people, according to Wikipedia.

PERSON 4: That is a lot of people.

SAMEER SHARMA: A smart city also has to be a data-centric city.

BRIAN DAVID JOHNSON: The Internet of Things is really just the ability to take computational power, to take sensing and put it into any device. Basically, we can make anything smart, but the question really becomes why? I think it starts to make a lot more sense when you look at a city because you can see where there's problems, you can see how to make it more efficient. And that's really what a smart city is. It's an entire computational system that's all hooked together.

WOMAN: Shattering everything into pieces and assembling it all back together in an efficient and beautiful and coordinated way. That's the future.

SAMEER SHARMA: At a very basic level. Humans have a need to connect with each other as part of a community and to explore.

WOMAN: If you're going to create these massive cities and live in these communities, people have got to become involved in their cities and become more civically minded. We have to all decide these things together.

MAN: The future just doesn't happen. It happens because you shape it.

SAMEER SHARMA: If we do our jobs right, you will have a very nicely paved path for these people to lead fulfilling lives.

WOMAN: This is the time where it's important step back and say, where is this all leading and where do we want to go?

Why would NASA outsource missions to SpaceX?