To sate that hunger, and growing overseas demand, meat production has trended steeply upward since the mid-20th century. In 2018 the United States produced 47 million tons of meat—that’s 30 million tons more than in 1961. Then came coronavirus.

But the meat industry’s current predicament has proved fertile ground for its plant-based competitors. 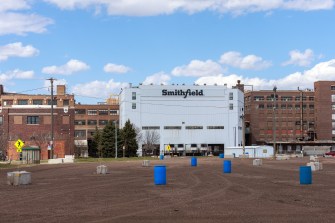 Despite panicked perceptions, the United States has plenty of food. According to the U.S. Department of Agriculture (USDA), the country maintains an “adequate domestic supply of meat, eggs, and dairy products to meet immediate demand.” Production has not halted altogether, and cold storage commodities remain robust.

Empty shelves and higher prices, the USDA notes, are likely due to the COVID-19-fueled rush to stock up on food items and the increased demand put on grocery stores now that fewer people frequent restaurants. Instead, the meat industry’s current bottleneck exists on the production side.

Meatpacking facilities have changed little since industrialization. Workers still stand shoulder-to-shoulder to process animals moving down a conveyor belt. One worker makes a cut here, another a cut there, while another removes a body part and another packages. It’s basically Modern Times as reimagined by Eli Roth.

Workers cannot maintain social distancing, and the speed of the job prevents proper hygiene. Food companies were slow to adopt safety guidelines, and even before the pandemic, there were reports of workers forced to wear diapers because they were denied time for bathroom breaks and other basic needs.

As a result, meatpacking facilities have become hotbeds for coronavirus transmission. According to the CDC, 115 facilities across 19 states had nearly 5,000 cases of coronavirus, leading to 20 deaths.

To curb infection, companies have slowed production, reduced staff, or stopped operations altogether. In one incident, Smithfield Foods halted operations at its Sioux Falls facility after a public disclosure revealed it was responsible for 40 percent of all South Dakota’s COVID-19 cases. 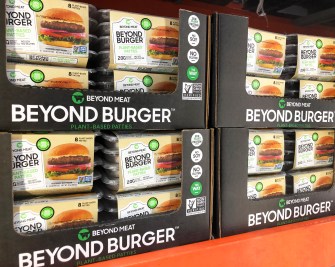 Beyond Meat’s plant-based patties on store shelves at Costco.

In the face of higher prices and the meat industry’s well-publicized relation with infectious diseases, Americans are trying something new: plant-based meats. According to a Nielsen report, the demand for alternatives has risen 280 percent since last year.

Companies at the forefront of plant-based meats, such as Impossible Foods and Beyond Meat, have been eager to supply the rising demand, and they’ve managed thanks to relatively unaffected supply chains and production methods that don’t require the close-quarters of meatpacking. So while other industries stagger through the pandemic, plant-based meats are flourishing.

Impossible Foods will be rolling out its Impossible Burger product to more than 1,700 Kroger Co. grocery stores nationwide. As reported by Supermarket News, that represents an 18-fold increase in Impossible Foods’ retail footprint in 2020.

“Our existing retail partners have achieved record sales of Impossible Burger in recent weeks. We expect our retail footprint to expand more than 50-fold by 2020, and we are moving as quickly as possible to expand with additional outlets and in more retail channels,” Dennis Woodside, Impossible Foods’ president, told Supermarket News.

Beyond Meat, meanwhile, has enjoyed a record first quarter in 2020. The company posted revenue growth of 141% ($97.1 million from 40.2) and a stock that has roughly quadrupled since its initial public offering.

“It’s all going Beyond Meat’s way. And what is Beyond Meat doing? They’re cutting prices,” Mad Money host Jim Cramer said. “So, the price of meat is going to go up for the regular meat, and the protein that skips the whole meat chapter is going to do well. Beyond Meat is one of the most dangerous shorts in this market.”

Though Beyond Meat remains a small company, Cramer notes, so were Amazon, Facebook, and Alphabet (Google’s parent company) before their time arrived.

Is animal cruelty the new slavery?

Will Beyond Meat go, well, beyond meat?

Will the pandemic shift America away from meat and toward more sustainable alternatives? Probably not. At least not any time soon.

A Pew Research Center found that only 9 percent of Americans consider themselves vegan or vegetarian, meaning 298 million of us can enjoy a juicy burger. That’s a lot of hearts and minds, and shifts in cultural eating habits can be geologic in their timeline. But it may prove a tipping point.

Both Impossible Foods and Beyond Meat list limiting suffering and sustainability on their mission statements, and their products do sport a reduced carbon footprint compared to meat—though higher than other vegetarian alternatives such as bean patties.

Those values are in line with younger generations and their shopping habits. It’s also no coincidence that Pew found young people the most likely to identify as vegan or vegetarian, while other research has shown the cohort to be the most experimental in their shopping.

“People don’t like to be contributing to climate change and biodiversity collapse and pandemics. It feels icky, so we try not to talk about it,” Rachel Konrad, Impossible Foods’ COO, told Vox. “But it’s in these moments when the gruesome reality of animal agriculture pierces into our consciousness—because of COVID or whatever else—that we start to wake up.”

A new study looks at what happens when you get infected with two viruses at the same time.
Videos

Technology designed to listen for atomic bombs can also hear tornadoes.
Up Next
Health

In late April, the news hit us hard: Lorna Breen, an emergency room doctor in a Manhattan hospital flooded with coronavirus patients, committed suicide. According to her father, the emotional […]