For a few weeks the media emphasized the need for hazard pay, or as some corporations called it, “hero’s pay.” While coronavirus cases are not going down everywhere—in 17 states infection rates are rising—companies such as Krogers and Starbucks are ending small salary bumps even though their workers are not out of danger.

In good news, Target extended its $2-an-hour bump through July 4. Amazon, however, felt its employees would prefer a “thank you” t-shirt over hazard pay. (They don’t.) Many employees, such as New Orleans sanitation workers, never received a requested increase. They’ve been striking for six weeks.

Given the circumstances, you’d expect corporations that are thriving during the pandemic to extend earnings to their workers. It hasn’t played out like that. A new study of over 100,000 Oregon-based businesses offers insight into why spending more on worker safety isn’t important to larger companies: It costs more to ensure their wellbeing than to ignore it.

Published in the journal Management Science and conducted by a group of academics in Oregon, Ohio, Dublin, and Cugat, Spain, this research was inspired by an ongoing debate regarding worker safety and enhanced prosperity. The team wanted to know if safer working conditions lead to greater profits. The short answer is no, at least if your company has over 100 employees.

Common sense has it that safer working conditions should result in reduced need for self-protection and greater commitment to the organization. Business owners weigh worker safety against overall productivity, however. Larger companies are willing to gamble. The team explains:

“Organizations that do not provide a safe workplace gain an economic advantage by avoiding burdensome costs and being more productive, which may explain why even proponents of ‘it pays to be safe’ provide evidence that numerous organizations are not safe.”

The researchers pored over disabling claims provided by the Oregon Department of Consumer Affairs. Those claims include workers who had taken at least three days off from work as well as those claiming a potentially permanent disability. As can be expected, serious claims are more expensive.

Here’s where it gets counterintuitive: Companies with worker injury claims survive up to 56 percent longer than companies without claims. The researchers say that is in large part due to lack of regulations: “Our results imply that the regulations of a developed economy are not enough to incent the elimination of poor safety.”

That’s right: Companies with the most resources to ensure worker safety are the least incentivized to do so.

In 1906, Upton Sinclair opened the nation’s eyes to the horrors of wage slavery. “The Jungle” began as an exposé in a socialist newspaper; Sinclair spent seven weeks working undercover in Chicago meatpacking plants. Though President Roosevelt initially called Sinclair a “crackpot,” he assigned two employees to investigate these facilities. Sinclair wasn’t exaggerating. The Meat Inspection Act and the Pure Food and Drug Act resulted from his reporting. The latter act inspired the creation of the Bureau of Chemistry, today known as the FDA. 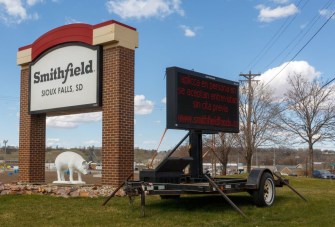 A sign for The Smithfield Foods pork processing plant in South Dakota, one of the countrys largest known Coronavirus clusters, is seen on April 20, 2020 in Sioux Falls, South Dakota.Photo by Kerem Yucel / AFP

In “The Jungle,” Sinclair artfully describes how the main character, a Lithuanian immigrant named Jurgis Rudkus, should feel after being hired by the mammoth Durham’s Pure Leaf Lard, a corporation employing 30,000 people.

“All that a mere man could do, it seemed to Jurgis, was to take a thing like this as he found it, and do what he was told; to be given a place in it and a share in its wonderful activities was a blessing to be grateful for, as one was grateful for the sunshine and the rain.”

On May 16, 700 new coronavirus cases were reported at meatpacking plants in the region of Amarillo, Texas. Alongside nursing homes and jails, these plants are hotspots for the coronavirus. The combination of cold temperatures, long working hours, and cramped, unsanitary conditions have made these facilities extremely dangerous. The pandemic has exposed how little has changed since Sinclair’s muckraking.

According to the Oregon study, businesses providing safety measures and improving competitiveness are few and far between. That’s because “treating compliance as a cost, and trying to comply, is more expensive than not complying and having accidents.” Governmental agencies predominantly let businesses self-regulate given their hamstrung inspection teams. The team concludes “the costs of preventing all harm is higher than the costs of not doing so.”

Makes you wonder who really wants to reopen America so badly. They will most likely not be on the assembly line.

Tags
coronaviruspublic healthsocial changeworkWorkplace
In this article
coronaviruspublic healthsocial changeworkWorkplace
Related
Health
Food expiration dates don’t have much science behind them
A food safety researcher explains another way to know what’s too old to eat.
The Present
Five key findings from the 2022 UN Population Prospects
Explore the key highlights from the UN’s latest release of its world population estimates.
Health
Sepsis still kills 1 in 5 people worldwide
Two ICU physicians offer a new approach to stopping it.
The Learning Curve
What is technology addiction? (And how you can better manage it)
To reap the benefits of digital technologies, we must contend with their addictive designs.
The #1 thing employees want at work
Here’s how to design a work environment that gives control to employees and stimulates open conversation.
▸
with
Todd Rose
Up Next
Neuropsych
Dogs go through an angsty teenage phase too
Pups in puberty prefer not to listen to their owners.