In late April, the news hit us hard: Lorna Breen, an emergency room doctor in a Manhattan hospital flooded with coronavirus patients, committed suicide. According to her father, the emotional toll of treating these patients was too much for her to handle. Even though she previously exhibited no sign of mental health issues, witnessing so many people being rolled into her facilities already dead was overwhelmed.

It’s hard to describe the chaos of an overbooked emergency room. I worked as a patient monitor at Robert Wood Johnson University Hospital for two years. The environment can transform from silent to slammed in a heartbeat. While my job was to ensure that patients didn’t try to kill themselves, it was impossible to miss the emotional challenges of being a doctor or nurse working a 24-hour shift, or even an 8-hour shift.

New York City claps for their health care force nightly. It’s a beautiful sentiment, yet when you’re working in the thick of this virus, hoping to both help others and not become infected yourself, the weight is heavy. I recently talked to a friend who is an emergency room physician’s assistant at a particularly hard-hit hospital. He told me that he recently yelled at someone in his neighborhood for not wearing a mask, and he is the last person I’d ever suspect of yelling at anyone. Your environment changes you. We are a different people now than just a few months ago.

Why religion is literally false and metaphorically true | Bret Weinstein

Why religion is literally false and metaphorically true | Bret Weinstein

A unique new study at the Harvard T.H. Chan School of Public Health found an interesting link between mental health and health care workers: those who attend a religious ceremony once a week are less likely to suffer from a death of despair. These include dying by suicide and alcohol or drug overdoses.

The researchers collected data from 66,492 female registered nurses and 43,141 male health care professionals, including dentists, pharmacists, and optometrists. The women’s data was collected from the large-scale Nurses’ Health Study II, conducted between 2001-2017. The men’s data comes from the Health Professionals Follow-up Study, conducted from 1988-2014.

The researchers note that life expectancy in the US has been decreasing since 2015. This coincides with an increased rate of midlife death from suicide, unintentional drug or alcohol poisoning, and alcohol-related chronic liver disease and cirrhosis. While “deaths of despair” was initially coined to describe the psychological effects of unemployment, the weakening of traditional support systems, such as religious services, are also implicated with higher drug and alcohol use and suicide. This is a particular challenge that we are navigating in the era of social distancing. 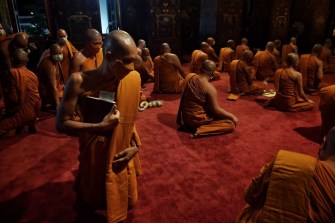 Buddhist monks wearing facemasks take their places for prayers inside the Wat Bowonniwetwiharn temple as Thais are encouraged not to gather inside places of worship, in an attempt to stop the spread of the COVID-19 novel coronavirus, on Visaka Bucha Day in Bangkok on May 6, 2020.

Previous studies have shown that religion is a positive determinant in health and mental well-being. Lower risks of suicide, heavy drinking, depression, and substance abuse has been observed in the religious. As they phrase it,

“Religious participation may promote health and well-being through strengthening social integration, encouraging healthy behaviors, and providing a sense of hope, meaning, and purpose in life.”

According to their research, religion tends to positively impact women more than men. The nurses had a 68 percent lower risk of death during the period studied. Men experienced a 33 percent reduced risk.

Research associate and data scientist, Ying Chen, who was first author of the study, notes that this is especially important information at this time.

“These results are perhaps especially striking amidst the present COVID-19 pandemic. They are striking in part because clinicians are facing such extreme work demands and difficult conditions, and in part because many religious services have been suspended. We need to think what might be done to extend help to those at risk for despair.”

Religion might not be a cure-all, but for alleviating symptoms of despair, religious services appear to help. Whether seeking existential guidance or social support, we are social animals. Community matters.

New research suggests they may be in the connections between your brain cells.
Thinking

Death is the great and terrifying unknown, awaiting us all at the end of this life. Giving it a personality makes it easier to gaze upon.
Neuropsych

The Four Different Meanings Of ‘Nothing’ To A Scientist

A region of space devoid of matter in our galaxy reveals the Universe beyond, where every point is a distant galaxy. The cluster/void structure can be seen very clearly, demonstrating […]