Walmart recently announced plans to battle Amazon in the massive online shopping market. At $98/year, Walmart+ offers many of the same perks, including same-day grocery delivery, as well as discounts at Walmart gas stations, one of the few things Amazon cannot offer (yet). Of course, it lacks the entertainment perks of Amazon Prime, such as the automatic subscription to numerous TV shows and movies.

Another important distinction: Walmart is offering discounts on fossil fuels while Amazon has promised to create a fleet of 100,000 electric delivery vans in order to become completely carbon neutral by 2040. That said, Walmart does have plans for reducing its carbon footprint as well. Unfortunately, these ambitious plans likely won’t impact harmful consumer habits, which are rooted in the conveniences that online retailers offer.

Earlier this year, a study from researchers in the Netherlands, Sweden, and the UK, published in the journal Environmental Science & Technology, confirmed what many expected: online shopping is worse for the environment than going to the store yourself. This contradicts previous research championing online shopping.

While Amazon boasts of its greening efforts, the corporation’s current protocols are horrendous. Many packages are glorified Matryoshka dolls. I recently ordered a three-inch cable that arrived wrapped in two boxes, padded by three layers of brown wrapping paper and plastic.

There seems to be no uniform shipping policies. Some books arrive in white padded envelopes, others in thin brown envelopes, some in boxes. While supply chain management is tricky, a company cannot both claim to be environmentally friendly and notoriously unreliable. Online retailers bank on convenience, not being stewards of nature. 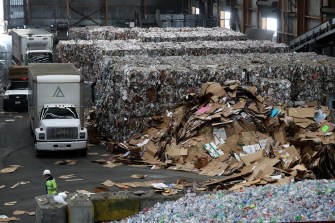 A pile of recycled cardboard sits on the ground at Recology’s Recycle Central on January 4, 2018 in San Francisco, California. Photo by Justin Sullivan/Getty Images

A large part of the reason is speed. In a competitive market, pure players use the equation, speed + convenience, to drive adoption. This is especially relevant to the “last mile” GHG footprint: the distance between the distribution center and the consumer.

Interestingly, the smallest GHG footprint occurs when you order directly from a physical store—even smaller than going there yourself. Pure players, such as Amazon, are the greatest offenders. Variables like geographic location matter; the team looked at shopping in the UK, the US, China, and the Netherlands.

Sadegh Shahmohammadi, a PhD student at the Netherlands’ Radboud University and corresponding author of the paper, says the above “pattern holds true in countries where people mostly drive. It really depends on the country and consumer behavior there.”

The researchers write that this year-and-a-half long study pushes back on previous research that claims online shopping to be better in terms of GHG footprints.

“They have, however, compared the GHG emissions per shopping event and did not consider the link between the retail channels and the basket size, which leads to a different conclusion than that of the current study.”

Online retail is where convenience trumps environment: people tend to order one item at a time when shopping on pure player sites, whereas they stock up on multiple items when visiting a store. Consumers will sometimes order a number of separate items over the course of a week rather than making one trip to purchase everything they need.

While greening efforts by online retailers are important, until a shift in consumer attitude changes, the current carbon footprint will be a hard obstacle to overcome. Amazon is trying to have it both ways—carbon-free and convenience addicted—and the math isn’t adding up. If you need to order things, do it online, but try to consolidate your purchases as much as possible.

Innovation training encourages the kind of creativity and problem solving that can lead to breakthroughs in business.
Up Next
Neuropsych

Chronic irregular sleep in children was associated with psychotic experiences in adolescence, according to a recent study out of the University of Birmingham’s School of Psychology.