Apple product launches are sort of like sports drafts in that there’s a lot of pageantry and hullabaloo surrounding what is ostensibly just an introduction to a slightly updated lineup. 99.5% of the people out there are going to be doing roughly the same thing they’re doing on these new machines as they are on their current ones, so it’s not that big a deal—right?

Well… perhaps it is this time. Apple just launched not one but three updates to its lineup: new iPad Pros, updated MacBook Airs, and even a revamp of the Mac Mini. 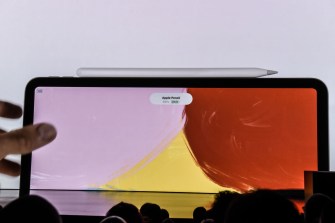 This is probably the biggest deal of the three. It not only looks futuristic, but it’s… well… it’s super cool. It has a processor that’s faster than most desktop computers and as much graphics power as the latest XBox, in a package that’s just a few millimeters thick and the size of a piece of paper. That’s pretty incredible.

The keynote spent some time showing just how good this is as a gaming device, too, with a vaguely humorous demonstration of what 2K Games’ NBA 2K looks like on the new iPad Pro. You can really see every bead of sweat on the players and movement in the stands, a far-cry from the crummy graphics of most mobile games.

It looks like last year’s iPhone X, itself a big deal, and for good reason. Anyone who has used an iPhone X (or XS or XR) can attest to how quickly the gesture system starts to feel natural—there’s no reason to go back to the home button after you use this thing. At risk of sounding too hyperbolic, this update turns the iPad from a “squashed / really big iPhone” into a laptop replacement. This is arguably what computers will look like in five years; the kind of design that actually looks like it’s from the future.

To put some of those numbers into perspective, the A12X Bionic chip is 40% faster than the A11 chip, which was in the last iPad Pros. So you’re looking at a dramatic increase in power, looks, and usability. 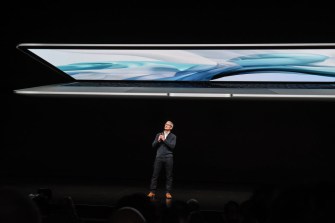 NEW YORK, NY – OCTOBER 30: Tim Cook, CEO of Apple unveils a new MacBook Air during a launch event at the Brooklyn Academy of Music on October 30, 2018 in New York City. This is Apple’s first full upgrade of the laptop in three years.

MacBook Airs got an update about three years ago, getting marginally bumped up specs so that they could continue to be used with Apple’s ever-evolving operating system. These new puppies, the 2018 MacBook Airs, however, get way bigger updates that put the old machines out to pasture. But before you get too excited, remember that this is the MacBook Air and thus doesn’t have nearly the top-notch technical specs as the MacBook Pro.

This could be the go-to option for most people looking for a new laptop. The Air line is Apple’s most popular laptop line for a reason: they’re light enough to throw into a backpack or bag without thinking twice and fast enough for almost everyone.

Ask yourself how much audio editing or video editing you’re really going to be doing over the next 3 to 5 years. If the answer is less than one Drake album or one family vacation video, chances are the MacBook Air is going to be your next laptop. 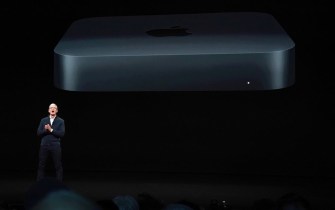 (Photo by TIMOTHY A. CLARY/AFP/Getty Images)

Return of the Mac (Mini)

Sing it now… the return of the (mini) Mac! Mac Mini’s are the caffeine-free-Diet-Coke of the Apple empire; if you love ’em, you’re part of a small but die-hard fanbase. They get the job(s) done. Nobody is going to be wowed by one on your desk. But string a few of them together (really—during the keynote, Tim Cook briefly showed a picture of an entire server farm full of them) and you’ve got an insanely powerful productivity team. At $799 they are considerably cheaper and more powerful than the MacBook Air by some degree, but don’t forget these roughly sandwich-sized computers don’t come with a display.

But, it’s worth mentioning, the last time these were updated was 2014. That was so long ago! There were midterm elections! An ebola outbreak in NYC! Pharrell wore a silly hat! Given that Apple has had four years to tinker with the Mini, what are you getting with the 2018 models?

Ideally, this is the kind of thing you’d buy 20 of if you were starting a start-up. They’re workhorses, and can handle 4K video editing easily without slowing down the rest of your workflow too much.

A professor of educational psychology explains what and what not to do.

Humanity’s most advanced tech still hasn’t unraveled the mysteries of the human mind. Can brain scans show us how we store memories?
▸
with
Lisa Genova
High Culture

Undiagnosed brain disease or divine inspiration? The origins of the French composer’s most provocative composition remain up for debate.
Neuropsych

Historical geniuses used the “creative nap” to give their minds a boost. Apparently, the “hypnagogic state” can help with problem solving.
Up Next
Health

About a third of doctors may not be doing enough.