After the tumultuous election year America had, the debate over what kind of leaders we want to represent us did not end. Helpful to the discussion are ideas by the famous astrophysist and speaker Neil deGrasse Tyson who in 2016 tweeted his thoughts on an ideal form of government:

Earth needs a virtual country: #Rationalia, with a one-line Constitution: All policy shall be based on the weight of evidence

Tyson’s viral tweet was generally received with mixed emotions as people weren’t sure how “Rationalia” would work and immediately saw some kind of fascist regime with eugenics on its mind. Or maybe something with communist underpinnings. Much of the doubt stemmed from the lack of confidence in the basic rationality of our species.

Presumably, Tyson does not see it that way and simply wants a government that is based on scientific evidence and reason.

In Tyson’s videos for BigThink, he touches upon several topics relevant to this discussion. Here he talks about the intersection of science and faith:

If you dissect the tweet further, you can notice that he’s calling for Earth to have a “virtual country” with an evidence-based directive in its constitution. Perhaps, he’s not saying this should be the only country in existence but it may be a sort of affiliation for all rational people (whatever physical country they might actually inhabit). This could lead to an interesting, internet-based experiment.

To further bolster the case for Rationalia, Tyson already recruited some of its first citizens. Namely, a host of famous “rational” people like Richard Dawkins and Brian Greene. 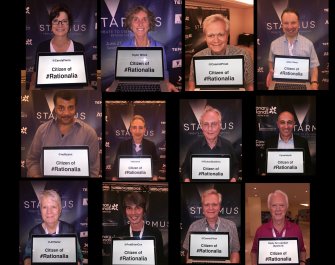 He goes into more detail in the video below. As he says towards its end (around 8:28) – it is unstable to build a government on a belief system. Religion or matters of belief or disbelief in provable issues (like the mountain of data suggesting climate change), do not have a place in government.

What you want is objectively verifiable truths, that we can all agree – that’s what you build your economic system on, your government system.

And if you wouldn’t mind having a President Tyson, you might want to check out his views on why STEM is important in boosting America:

The questions about which massive structures to build, and where, are actually very hard to answer. Infrastructure is always about the future: It takes years to construct, and lasts for years beyond that.
High Culture

Unstable politics and virtue signaling are responsible for creating bureaucratic nightmares.
The Past

These Roman Emperors were infamous for their debauchery and cruelty.
Up Next
Politics & Current Affairs

Will Brexit Really Happen and Will It be Permanent?

The U.K. has voted to leave the European Union, but here are the scenarios in which it stays in.