You have been queueing for three hours and are already pretty annoyed when the clerk calls you forward. He first asks for your P445b form — all 12 pages of it. After an insultingly brief look, he dots the form with random whacks of his stamp. Next you present the R45c form, another 12 pages, half of which are the same as the P445b. Another glance, more stamps.

Now you have to hand over five passport-sized photos with no neck showing and both eyes at least 84 percent open. On and on it goes for half an hour. Form, glance, stamp. Then, just as you are about to be done, the clerk asks for your Form Documentation Wallet.

“The what?!” you ask, trying to keep your voice steady. The man rolls his eyes.

You leave and book another appointment in two months’ time.

Welcome to the all-too-familiar world of 21st century bureaucracy — a monstrous, lumbering maze of forms, stamps, and writing letters in tiny boxes. A world that is, frankly, Kafkaesque. And now, a forthcoming paper authored by a team led by Gabriele Gratton to be published in the American Economic Review, argues that political instability propagates this kind of inefficient bureaucracy, thereby clogging and choking economic output.

Laws and reforms ought to make life easier or better. The philosophical ideal of this was presented by political theorist Max Weber. The Weberian model is one in which bureaucracy “guarantees order and maximizes efficiency” and with “few useless reforms.”

A new and exciting law might make a politician famous, but long after they are gone, society will pay the price.

In short, it’s a society that has competent politicians who have done their research and who pass laws that serve a practical purpose. For this to happen, a government needs elected representatives who are in office long enough to do the hard work of drafting legislation and must not worry (too often) about losing their job. In other words, a country must have political stability.

The opposite of this is when a political system is so unstable that it “shortens the horizon of less competent politicians,” who therefore insist on passing ill-considered and knee-jerk legislation for which they will not have to be accountable anyway. An unstable political body with a high turnover is associated with an increase in ineffective reforms that lead to a Kafkaesque bureaucracy. A legislature filled with one-term legislators simply is not invested in what its laws will do. 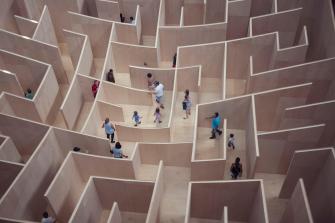 In Kafka’s works, especially The Trial, the reader experiences a claustrophobic and absurd dystopia, weighed down by a pointless and relentless bureaucracy. This is not just the kind of petty nuisance of a passport renewal; instead, it is an illogical and arbitrary system that is soul-crushing. It is waiting months for an application to be approved, only to be rejected by some faceless bureaucrat without any guidance as to why. It is being judged suitable or not without any idea of the criteria you ought to satisfy. It is filling out forms or getting licenses that not only don’t make sense to you but don’t make sense to anyone. It is the drip, drip, drip of nonsense legislation that makes up a swamp, and wading through it saps and destroys you.

According to the aforementioned study, political instability provides fertile ground for this kind of Kafkaesque system. For instance, the fall of the USSR caused huge political instability across much of Europe. In Italy, there was “an increase in the production of new laws, a deterioration in their quality, and a progressive fall in the efficiency of its bureaucracy.” In comparison, Germany, which kept true to the Weberian ideal, remained stable and therefore efficient.

Laws are now a form of virtue signaling

Even politically stable countries can’t escape the Kafka curse. Gratton and her colleagues make the point that many of the world’s democracies are witnessing a trend toward laws being used as a form of virtue signaling. Instead of addressing practical matters, politicians use legislation as a form of political activism and as an appeal to their supporters. Often through media coverage, there is a “reputational pay-off” for passing laws, no matter how ineffective or ill-considered they are. Basically, it’s all a performance.

One way that this kind of performative legislation can be minimized is through certain reforms, exemplified by the U.S. House of Representatives’ rules on “co-sponsorship.” In the 1960s and early 1970s, the House capped the number of legislators allowed to co-sponsor a bill (which is essentially a public sign of support) at 25. If a legislator could not become a sponsor, they would write another similar or even identical bill.

Unsurprisingly, the number of bills in the House skyrocketed to roughly four times the number in the Senate (where legislators are in office for six years and potentially less concerned about performative bills than the House legislators who serve only two years). When the cap was lifted, the number of pointless, Kafkaesque, bills dropped to being equal with that of the Senate.

Politicians need room to do their job

The paper by Gratton et al. reveals to us a new but important issue: the value in giving politicians room to do their job. Inevitably, politicians always will have one eye on the next election, but when this is taken too far, it leads to short-termism, performative action, and woefully ineffective legislation.

This is far from harmless. Kafkaesque bureaucracies clog the economic system. When businesses and individuals have to waste time and money on pointless box-ticking, everyone is affected. A new and exciting law might make a politician famous, but long after they are gone, society will pay the price.

Symbolic gestures often speak to our psyche in ways no rational action could ever speak to our intellect.
Thinking

This world map shows how the rest of the world LOLs. In France, you MDR; in China, you 23333.
Up Next
Starts With A Bang

Will These Two Stars Merge Into A Luminous Red Nova In 2022?

When two orbiting stars come into contact with one another, they can exchange mass, interact, or merge, with the potential of leading to a luminous red nova if the right […]