We rightfully complain about many of our politicians and leaders today, but historically speaking, humanity has seen much worse. Arguably no set of rulers has been as debauched, ingenious in their cruelty, and prone to excess as the Roman Emperors.

While this list is certainly not exhaustive, here are seven Roman rulers who were perhaps the worst of the worst in what was one of the largest empires that ever existed, lasting for over a thousand years.

Officially known as Gaius (Gaius Caesar Augustus Germanicus), Caligula was the third Roman Emperor, ruling from 37 to 41 AD. He acquired the nickname “Caligula” (meaning “little [soldier’s] boot”) from his father’s soldiers during a campaign.

While recognized for some positive measures in the early days of his rule, he became famous throughout the ages as an absolutely insane emperor, who killed anyone when it pleased him, spent exorbitantly, was obsessed with perverse sex, and proclaimed himself to be a living god. 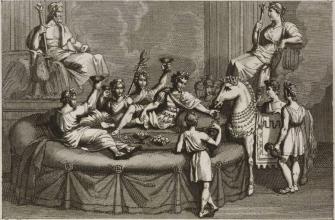 Caligula gives his horse Incitatus a drink during a banquet. Credit: An engraving by Persichini from a drawing by Pinelli, from “The History of the Roman Emperors” from Augustus to Constantine, by Jean Baptiste Louis Crevier. 1836.

Among his litany of misdeeds, according to the accounts of Caligula’s contemporaries Philo of Alexandria and Seneca the Younger, he slept with whomever he wanted, brazenly taking other men’s wives (even on their wedding nights) and publicly talking about it.

He also had an insatiable blood thirst, killing for mere amusement. Once, as reports historian Suetonius, when the bridge across the sea at Puteoli was being blessed, he had a number of spectators who were there to inspect it thrown off into the water. When some tried to cling to the ships’ rudders, Caligula had them dislodged with hooks and oars so they would drown. On another occasion, he got so bored that he had his guards throw a whole section of the audience into the arena during the intermission so they would be eaten by wild beasts. He also allegedly executed two consuls who forgot his birthday.

Suetonius relayed further atrocities of the mad emperor’s character, writing that Caligula “frequently had trials by torture held in his presence while he was eating or otherwise enjoying himself; and kept an expert headsman in readiness to decapitate the prisoners brought in from gaol.” One particular form of torture associated with Caligula involved having people sawed in half.

He caused mass starvation and purposefully wasted money and resources, like making his troops stage fake battles just for theater. If that wasn’t enough, he turned his palace into a brothel and was accused of incest with his sisters, Agrippina the Younger, Drusilla, and Livilla, whom he also prostituted to other men. Perhaps most famously, he was planning to appoint his favorite horse Incitatus a consul and went as far as making the horse into a priest.

In early 41 AD, Caligula was assassinated by a conspiracy of Praetorian Guard officers, senators, and other members of the court.

Fully named Nero Claudius Caesar, Nero ruled from 54 to 68 AD and was arguably an even worse madman than his uncle Caligula. He had his step-brother Britannicus killed, his wife Octavia executed, and his mother Agrippina stabbed and murdered. He personally kicked to death his lover Poppeaea while she was pregnant with his child — a horrific action the Roman historian Tacitus depicted as “a casual outburst of rage.”

He spent exorbitantly and built a 100-foot-tall bronze statue of himself called the Colossus Neronis.

He is also remembered for being strangely obsessed with music. He sang and played the lyre, although it’s not likely he really fiddled as Rome burned in what is a popular myth about this crazed tyrant. As misplaced retribution for the fire which burned down a sizable portion of Rome in the year 64, he executed scores of early Christians, some of them outfitted in animal skins and brutalized by dogs, with others burned at the stake.

He died by suicide. 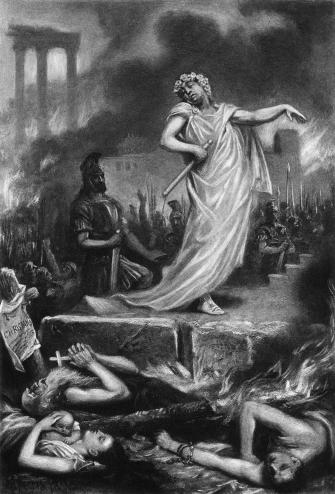 Like some of his counterparts, Commodus (a.k.a. Lucius Aelius Aurelius Commodus) thought he was a god — in his case, a reincarnation of the Greek demigod Hercules. Ruling from 176 to 192 AD, he was also known for his debauched ways and strange stunts that seemed designed to affirm his divine status. Numerous statues around the empire showed him as Hercules, a warrior who fought both men and beasts. He fought hundreds of exotic animals in an arena like a gladiator, confusing and terrifying his subjects. Once, he killed 100 lions in a single day. 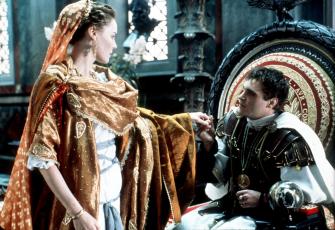 The burning desire to kill living creatures as a gladiator for the New Year’s Day celebrations in 193 AD brought about his demise. After Commodus shot hundreds of animals with arrows and javelins every morning as part of the Plebeian Games leading up to New Year’s, his fitness coach (aptly named Narcissus), choked the emperor to death in his bath.

Officially named Marcus Aurelius Antoninus II, Elagabalus’s nickname comes from his priesthood in the cult of the Syrian god Elagabal. Ruling as emperor from 218 to 222 AD, he was so devoted to the cult, which he tried to spread in Rome, that he had himself circumcised to prove his dedication. He further offended the religious sensitivities of his compatriots by essentially replacing the main Roman god Jupiter with Elagabal as the chief deity. In another nod to his convictions, he installed on Palatine Hill a cone-like fetish made of black stone as a symbol of the Syrian sun god Sol Invictus Elagabalus.

His sexual proclivities were also not well received at the time. He was likely transgender (wearing makeup and wigs), had five marriages, and was quite open about his male lovers. According to the Roman historian (and the emperor’s contemporary) Cassius Dio, Elagabalus prostituted himself in brothels and taverns and was one of the first historical figures on record to be looking for sex reassignment surgery.

He was eventually murdered in 222 in an assassination plot engineered by his own grandmother Julia Maesa.

Emperor for just eight months, from April 19th to December 20th of the year 69 AD, Vitellius made some key administrative contributions to the empire but is ultimately remembered as a cruel glutton. He was described by Suetonius as overly fond of eating and drinking, to the point where he would eat at banquets four times a day while sending out the Roman navy to get him rare foods. He also had little social grace, inviting himself over to the houses of different noblemen to eat at their banquets, too. 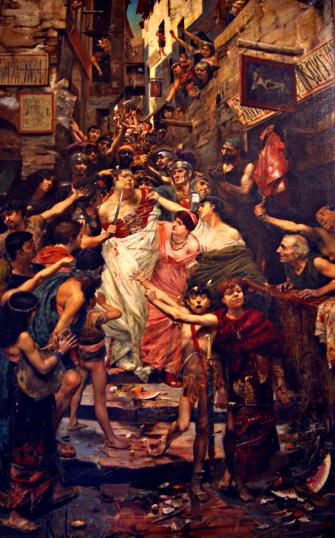 He was also quite vicious and reportedly either had his own mother starved to death or approved a poison with which she committed suicide.

Vitellius was ultimately murdered in brutal fashion by supporters of the rival emperor Vespasian, who dragged him through Rome’s streets, then likely beheaded him and threw his body into the Tiber river. “Yet I was once your emperor,” were supposedly his last words, wrote historian Cassius Dio.

Marcus Aurelius Antoninus I ruled Rome from 211 to 217 AD on his own (while previously co-ruling with his father Septimius Severus from 198). “Caracalla”‘ was his nickname, referencing a hooded coat from Gaul that he brought into Roman fashion.

He started off his rise to individual power by murdering his younger brother Geta, who was named co-heir by their father. Caracalla’s bloodthirsty tyranny didn’t stop there. He wiped out Geta’s supporters and was known to execute any opponents to his or Roman rule. For instance, he slaughtered up to 20,000 citizens of Alexandria after a local theatrical satire dared to mock him. 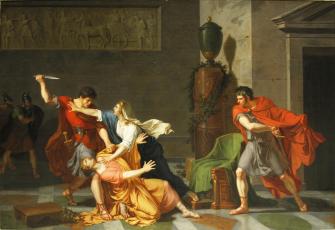 One of the positive outcomes of his rule was the Edict of Caracalla, which gave Roman citizenship to all free men in the empire. He was also known for building gigantic baths.

Like others on this list, Caracalla met a brutal end, being assassinated by army officers, including the Praetorian prefect Opellius Macrinus, who installed himself as the next emperor.

As the second emperor, Tiberius (ruling from 42 BC to 16 AD) is known for a number of accomplishments, especially his military exploits. He was one of the Roman Empire’s most successful generals, conquering Pannonia, Dalmatia, Raetia, and parts of Germania.

He was also remembered by his contemporaries as a rather sullen, perverse, and angry man. In the chapter on his life from The Lives of the Twelve Caesars by the historian Suetonius, Tiberius is said to have been disliked from an early age for his personality by even his family. Suetonius wrote that his mother Antonia often called him “an abortion of a man, that had been only begun, but never finished, by nature.”

Suetonius also paints a damning picture of Tiberius after he retreated from public life to the island of Capri. His years on the island would put Jeffrey Epstein to shame. A horrendous pedophile, Tiberius had a reputation for “depravities that one can hardly bear to tell or be told, let alone believe,” Suetonius wrote, describing how “in Capri’s woods and groves he arranged a number of nooks of venery where boys and girls got up as Pans and nymphs solicited outside bowers and grottoes: people openly called this ‘the old goat’s garden,’ punning on the island’s name.”

There’s much, much more — far too salacious and, frankly, disgusting to repeat here. For the intrepid or morbidly curious reader, here’s a link for more information.

After he died, Tiberius was fittingly succeeded in emperorship by his grandnephew and adopted grandson Caligula.

The spikes in their mouths would have helped them catch squid or fish.
Sponsored

Between the instability of the real estate market and cryptocurrency fluctuations, everyone has been talking about bubbles. But what are they, really?
High Culture

Actor and science communicator Alan Alda shares his three rules of three for effective and empathic communication.
Up Next
Hard Science