Of humanity’s greatest inventions, fire remains as important today as in the time of our ancient ancestors. If not as apparent.

We even use fire in ways our ancestors couldn’t have imagined. The internal combustion engine has replaced animals and our own wobbly legs as the preferred method of travel. We can go farther in a day than the vast majority of our ancestors did in a lifetime and even escape the confines of our planet. Thanks to fire.

But fire has done more than create the energy that makes our lives comfortable. By one Harvard professor’s account, fire altered the course of our evolution.

Some of our earliest evidence for fire goes back 440 million years to the Silurian period, when Earth’s climate stabilized and plants and animals began to move to land. Of note, this period provides the earliest fossil evidence of vascular plants. 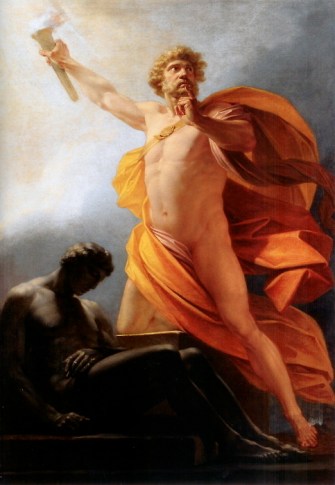 We didn’t start the fire

Low-hanging references aside, Billy Joel was on to something. Popular culture conjures the image of a caveman banging two stones together. Sparks fly, and then the eureka moment. Yet, our ancestors’ first usage of fire probably wasn’t a matter of control or invention. It was more likely opportunistic.

In a review for the Royal Society Philosophical Transactions B, J.A.J. Gowlett hypothesizes that hominins took advantage of natural wildfires for foraging. “For hominins,” he writes, “benefits could include retrieval of birds eggs, rodents, lizards and other small animals, as well as invertebrates. Although fire does not create such resources, it renders them far more visible, and chance cooking might well improve their digestibility.”

Gowlett notes that analogues to this behavior exist in the natural world today. Savanna chimpanzees use fires to locate resources, and several bird species follow fires to snatch up any prey flushed out by the smoke and flames. There has even been anecdotal evidence of some raptors, such as Australia’s “firehawks,” picking up smoldering wood from one fire and carrying it elsewhere to start another.

Early hominins would have also begun to discover fire’s properties by observing and interacting with these blazes. For example, if a meaty morsel proved too raw, they may have learned to place it on embers to continue the cooking process.

Given our early reliance on nature for fire, it’s little wonder that the theft of fire theme has appeared time and again in the world’s mythologies. 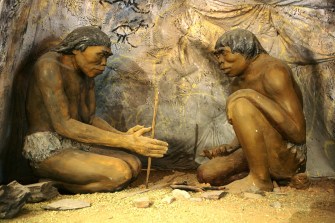 It’s difficult to follow the development of hominin control over fire because of what Gowlett calls its “disappearing act.” Fire isn’t as well preserved in the archeological record as, say, middens or flint tools. And progress was incremental, with fire control being learned in different places at different times.

As we move forward, we see more evidence of hominins’ control over fire. Archaeologists have discovered campfire traces and charred animal and plant remains at Wonderwerk Cave in South Africa. These have been dated back to approximately one million years ago. And the oldest known hearth, found at Qesem Cave, Israel, dates back more than 300,000 years ago.

Interestingly, archeologists aren’t sure which hominin species got cozy at Qesem. “It is clearly different than[Homo] erectus and has affinities of both[Homo] sapiens and Neanderthals,” Ran Barkai, Tel Aviv archaeologist, told National Geographic. “Since Neanderthals appear very late in the Levant and are of European origin, and since the Qesem teeth bear more resemblance to early Homo sapiens in the Levant, we believe they are closer to Homo sapiens.”

At this point, Gowlett argues, the invention of fire belongs to our ancestors. “[A]n understanding is emerging that fire use is not a single technology or process, but that several scales of use, and probably several intensifying technologies, evolved over a long period, intertwined, and sometimes eventually became bound together,” he writes.

How to Eat Your Way to Mental Clarity, with Nutritional Psychiatrist Drew …

But how did fire make us human? It allowed us to cook our food. That’s according to the cooking hypothesis proposed by Richard Wrangham, Ruth B. Moore Professor of Biological Anthropology at Harvard.

Cooked meats are easier to chew and digest; as a result, our bodies can extract more nutrients from the same amount of meat. Similarly, cooking vegetables increases levels of healthy stuff like antioxidants. That’s because the cooking process breaks down the plants’ cell walls and, like meat, makes them easier to digest and process. (Though, it is a tradeoff. Some veggies are healthier raw, and it depends on how you cook them.)

With that said, the cooking hypothesis has its detractors. Some argue there is little proof that humans were cooking or maintaining fire in concurrence with Homo erectus’ brain-size explosion (roughly 1.5 million years ago). It’s also possible that a diet of raw meat and veggies could have provided the necessary nutrients for bigger brains.

Tags
anthropocenediscoveryenergyinnovationinventionnatureplantstechnology
In this article
anthropocenediscoveryenergyinnovationinventionnatureplantstechnology
Related
The Future
How a device transmits radio waves with almost no power
Apart from the energy needed to flip the switch, no other energy is needed to transmit the information.
The Present
Climate change is altering the chemistry of wine
Smoke taint from wildfires is gross, even to wine amateurs.
The Present
How heat pumps of the 1800s are becoming the technology of the future
Innovative thinking has done away with problems that long dogged the electric devices — and both scientists and environmentalists are excited about the possibilities.
Starts With A Bang
This shockingly simple battery could store energy forever
Capacitors, acid batteries, and other methods of storing electric charges all lose energy over time. These gravity-fed batteries won’t.
The Present
How California could save its rain instead of letting it drain into the ocean
Why can’t more rainwater be collected for the long, dry spring and summer when it’s needed?
Up Next
The Present
What do we lose when we can’t get lost?
Maura O’Connor discusses her new book, Wayfinding: The Science and Mystery of How Humans Navigate the World.