There were several things newly invented during the Civil War that became keys to saving lives, as well as taking them. The Gatling Gun and repeating rifles, both invented just before or during the war, became quite effective at slaughter, as well as producing wounded men in unprecedented numbers.

Because such a devastating and massive war usually generates rapid advancement along medical fronts, inventions and new discoveries came fast and furious during those four years.

Minié Ball examples. These were made for and carried by soldiers from the North (the 3 rings at the bottom of each; Confederate bullets had just 2). Image source: Wikimedia Commons

There was a reason amputations were streamlined during the war — and it was not because the surgeons and other medical staff were not capable. In 1840, a new kind of bullet was invented; the Minié Ball, named for its inventor.

This was 0.58 caliber — slightly smaller than the end of an adult human thumb. Due to their usage in rifled barrels, this bullet dramatically increased the accuracy of weapons of the time, as well as their damage. Rapid amputations were “invented” and practiced during the Civil War partly because of the sheer number of casualties and the need for the injured to be quickly stabilized. But the primary reason was because that very same Minié Ball caused such fragmentation and shattering of bone, ligaments, muscle, and flesh, that if amputation were not performed, then complications such as gangrene and infection — followed by death — were certain.

The solution? Cut the limb off well above the damaged area.

Spent a good part of the day in a large brick mansion on the banks of the Rappahannock, used as a hospital since the battle — seems to have received only the worst cases. Outdoors, at the foot of a tree, I notice a heap of amputated feet, legs, arms, hands, &c., a full load for a one-horse cart. — Walt Whitman 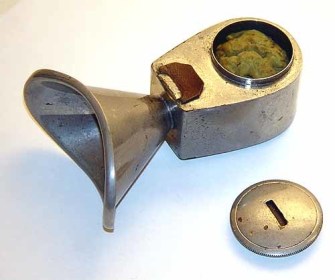 With that many surgeries going on at once, pretty much constantly during most battles, there had to be a way to mercifully knock these people out while their limbs were amputated. Chloroform and ether were invented just 15 years before the war began, and they had not been deployed for use on battlefields involving mass casualties yet.

When available, chloroform was the go-to on Civil War battlefields, because ether was extremely flammable. It was usually applied via cotton balls, handkerchief, etc. This, however, wasted much of the precious drug.

The invention that saved a lot of soldiers from excruciating pain (something on the order of 95 percent of those who endured surgery for such wounds) was the anesthesia inhaler, invented just before the war and deployed as the field hospitals began to have an extreme need. These enabled medical staff to rapidly give chloroform to multiple soldiers with as little waste as possible. And, still to this day, a modern variant of that invention is used (with newer, superior intoxicants) before and during surgeries. 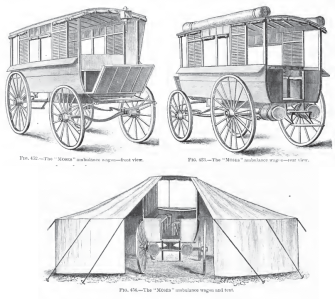 One of the early high-casualty battles of the Civil War was the First Battle of Bull Run (or Manassas, as it’s known to Southerners), which began on July 21, 1861. The soldiers who ended up being hurled into the fight had no idea what to expect; many of the Union forces were 90-day volunteers that President Abraham Lincoln had sought after Fort Sumter fell to Confederates. There were many gatherings of people watching the fight; expecting nothing as severe as what was to come, some bystanders — including a few dozen senators, and enterprising people selling pies and other food — setup picnic blankets and watched. But when the horror unfolded, many of them got in their carriages and headed back from whence they came.

Fleeing with those non-soldiers, however, were most of the private ambulances hired to help out; they’d never seen such carnage, and this experience terrified them, causing them to flee just as they were needed.

A few days later, when the full extent of the back-and-forth was over, there were 3,000 casualties on the Union side and about half of that on the Confederate side. Many lay dying for hours on the fields, since the concept of quickly ferrying the wounded to field hospitals was not yet invented — and all of the private ambulances hired had skedaddled.

The Medical Director of the Army of the Potomac, Jonathan Letterman, got to work immediately after Bull Run, and devised an ingenious “ambulance-to-E.R.” system involving the use of existing soldiers and medical staff that is still basically in use today. By the time of the Battle of Antietam in September, it was fully deployed, with 50 ambulances containing a driver and two stretcher-bearers each, to quickly get the injured to field hospitals. 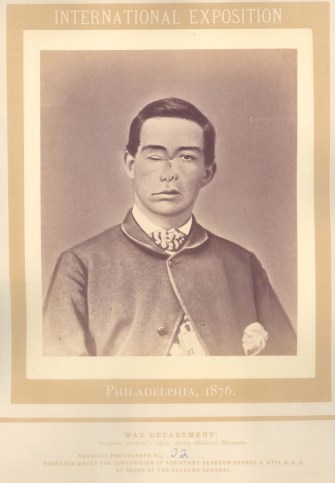 National Museum of Health and Medicine

Before the U. S. Civil War, reconstructive plastic surgery, especially of the face, didn’t really exist — it had been theorized in the medical journal known as The Lancet in 1837, and before that, facial reconstruction was limited to taking skin flaps and bone from other parts of the body to form facial features. But with over 10,000 cases of gunshot and cannon shrapnel wounds to the faces of various soldiers during the war, the need for something to at least partially reconstruct facial features was pretty dire. That put it high on the priority list.

Of course, with it being more or less experimental in nature and very much in need of research and testing, it couldn’t be deployed for very many of those 10,000; indeed, it was successfully performed on only about 30 former soldiers or officers. 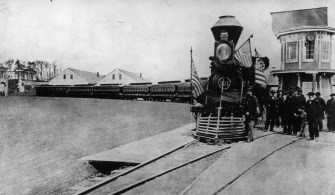 The act of “arterial” embalming the dead — replacing their blood with chemicals to preserve the body long enough to get through services and burial — had been invented in France about 25 years before the Civil War.

But it took until the end of the war for it to really catch on in the United States; the casualties from the war itself were partly why. Up until that time, a family member dying usually meant the body would not be preserved, but would rather decompose within a few days or a week. This meant funeral services happened quickly, by necessity. And even then, the body was frequently surrounded in candles and other masking scents.

Most of the over 600,000 soldiers who died during the entire war were either put into mass graves or left where they lay in the fields and trenches. Only those with wealthy families had their bodies retrieved for services back home — and even then, all of those arrangements had to be made quickly, or the bodies would be too decomposed for even recognition. The science of embalming was still relatively new, so various experiments in the practice were conducted on deceased soldiers; indeed, 40,000 of the 600,000 dead were embalmed during the entire 4-year period. It was “catching on.”

Fast forward to the end of the war, when Abraham Lincoln was assassinated. His body was quickly embalmed, and then placed on a funeral train that worked its way across the country to Illinois.

Even then, the new process wasn’t effective enough to keep the body preserved for the entire two-week trip. While people near the early train stops marveled that his appearance was so life-like — they even tried to reach out and touch him — near the end of the funeral train stops, Lincoln’s face appeared hollow and gaunt. It was time for him to be lowered into the family burial plot.

Still, the experience of seeing and hearing about Lincoln’s funeral train’s visit to 180 cities made the concept of embalming the dead a permanent part of U.S. culture. 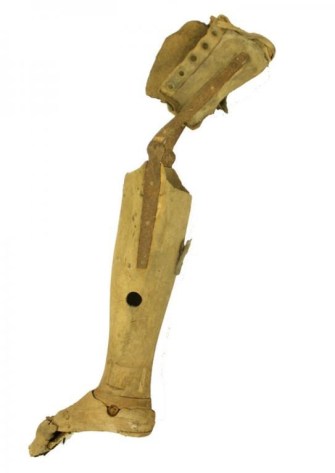 Because amputations of the leg were considered worse than those of the arm due to the social impact as well as the ability to work on the farm and in factories, the lack of a prosthesis for either leg was becoming a big problem for soldiers returning home missing a lower limb.

One Confederate Virginia soldier, James Edward Hanger, was wounded early in the war, during the Battle of Philippi. When he returned home, his leg amputated just below the left hip, he disappeared into isolation — his family assuming he was depressed and didn’t want anyone to see him in the state he was in. This was true, however, Hanger approached that isolation from a creative and nuanced angle: His missing leg was a problem to solve.

I cannot look back upon those days in the hospital without a shudder. No one can know what such a loss means unless he has suffered a similar catastrophe. In the twinkling of an eye, life’s fondest hopes seemed dead. I was the prey of despair. What could the world hold for a maimed, crippled man!

Up until that time, leg replacements were simple devices, usually “peg” legs, stiff and definitely not something that would enable someone to have a gait that was at all normal.

He created not just the first jointed leg prosthetic out of barrel staves, rubber, joints, nails, and hinges, but a revolution in an industry that was about to explode. The “Hanger Limb” went from being a creation out of necessity to an industry that won a state grant to mass produce them in Virginia, and then after the war, a U. S. patent, and factories were setup in major cities across the world, making the limbs commonplace and effective for amputees of the Civil War as well as all other wars since.

Indeed, today Hanger, Inc. remains the largest maker of prosthetics in the world.

Tags
inventionmedical researchwar
In this article
inventionmedical researchwar
Related
The Past
Rise of the war machines: What drove the evolution of military technologies?
Historians know how military technologies evolved, but the reasons why remain poorly understood.
Hard Science
Beyond pain and pressure: 2021 Nobel Prize for medicine awards work on sensory perception
David Julius and Ardem Patapoutian were awarded the highest honor in medicine for their research into how human bodies make sense of and respond to the outside world.
Surprising Science
What happens when two different respiratory viruses infect the same cell?
A new study looks at what happens when you get infected with two viruses at the same time.
The Present
Why doesn’t the U.S. win wars anymore?
Paradoxically, we lose wars because the world is peaceful and the U.S. is powerful.
Health
Barnacles inspire a blood-repelling tissue glue for sealing wounds faster
MIT researchers design glue that mimics the sticky substance barnacles use to cling to rocks.
Up Next
Neuropsych
Visualizing your partner’s face can lower stress levels
Need to reduce your stress? Try thinking of the face of your better half.