A befuddling trend in the world of gaming culture has emerged in the coronavirus era. In the midst of a deadly pandemic, economic decline, social injustice, and the resulting social unrest, some of the most downloaded video game genres in recent months have been horror games designed to inspire terror and anxiety. For example, “Resident Evil 3,” “The Last of Us Part 2,” “Nioh,” and “Doom Eternal” have all seen a spike in downloads.

As it turns out, there may be a psychological explanation. Some researchers think that inserting yourself into a virtual horror anti-fantasy could offer relief during times of stress. 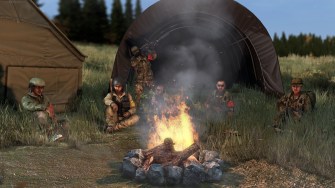 In a new study published in the journal Preternature, the authors suggest that disturbing video games may have a therapeutic role in today’s precarious world by providing players the illusion of control. “Faced with physical and psychological dangers, human beings imagine them as monsters and seek to master them,” they write in the paper.

This idea is exemplified by the authors through a critical analysis of the post-apocalyptic game “DayZ,” in which the player enters the middle of a zombie infested landscape. The aim is simply to survive with bare minimum equipment and a fragile character. Death in the game is final, and the character has to be recreated to play again. Essentially, the goal is to keep the underdog character alive as long as possible despite the stacked odds.

Maybe it hits too close to home, but for some it might be exactly the kind of escapism they are craving right now. At least, that’s what the authors suggest. They explain that when unfortunate and uncontrollable events start to occur in our worlds (i.e. coronavirus) we may personify them as malevolent forces intentionally out to destroy us; our health, our jobs, our relationships, etc. But these forces in our environment are not material and maddeningly elusive. Horror video games, on the other hand, solidify those fears into material monsters. They offer players a virtual realm in which they can embody a character that can actually fight and possibly destroy those forces. In this way, these games give individuals a sense of control in precarious times.

Much of the stress that stems from something like a pandemic or economic uncertainty is the helpless feeling about events entirely out of our control. Terrorizing video games offer the opportunity to actually do something about stressful events.

“The horrific experience of video games, and hence their cathartic appeal, emerges when a game produces a constant level of anxiety in players while allowing the players to act on it,” the authors explain. They write that fans of “DayZ,” “generally enjoy, rather than avoid, the combination of permanent death…and the drive to strengthen their characters and make them safe.”

The authors argue that this is similar to religious tactics to grapple with fear and guilt (sin).

“Religion stems, in part, from our capacity to see agency in our environment,” explains the study. “A strategy designed to help us avoid danger, but which also leads us to believe that there are forces at work just outside of our immediate awareness. The tendency to turn shadows into stalkers and fallen twigs into footsteps.”

Both horror games and the belief in an angel / demon spiritual duality of the universe give us a sense of control over our destinies.

After surveying more than 7000 players of two online horror games, “Requiem: Memento Mori” and “DayZ,” the researchers found that nearly 70 percent reported that the gaming experience was mildly to very cathartic. Another interesting finding was that 20 percent of the participants reported that since playing the video game they felt that things were less frightening than before. Though, most said that the games had not changed their daily life.

The authors believe that the dark forces faced in the electronic world of video games “represent the irrational, the repressed, and the wholly other.” They go on to suggest that those experiences are reconstructed in the world of a horror game and manifested as tangible, albeit virtual, monsters that players feel are directly challenging.

“That these games exist shows that we need horror,” they conclude. “The demonic and the monstrous appear in pop culture because they represent evil and our fears and anxieties. It is our human nature to be attracted to the horrific and obtain pleasure from encountering it because this is how we gain a partial and temporary victory over ourselves.”

Ultimately, these findings seem to indicate that human nature seeks physical control, even the illusion of control, over our fates and fears whether it’s through horror gaming, religion, protest, or another means.

Researchers create a device to test a 50-year-old physics theory from the famed Roger Penrose.