A theory proposed 50 years ago to explain how energy might be harvested from a black hole was verified by an experiment. Scientists from the University of Glasgow were able to provide first proof for an idea from 1969 by the famed British physicist Roger Penrose, who predicted that only an advanced alien civilization would be able to get energy in the black hole’s ergosphere – the outer layer of its event horizon.

Why would it take a highly advanced civilization to do this? Penrose thought that if you were to lower an object into the ergosphere, you could produce negative energy. But for this to work, the object would have to be moving faster than the speed of light. Penrose envisioned a mechanism that would split an object dropped into the black hole in two, with one part going into the hole while the other would be recovered. As explains the press release from the University of Glasgow, the recoil generated by this process would result in the saved half gaining energy from the black hole’s rotation.

Of course if this sounds complicated, it really is and only a very high-tech futuristic civilization would be up for the challenge, concluded Penrose.

What the scientists were able to do now was to test this idea by an experiment based on the proposal from another physicist, Yakov Zel’dovich. He suggested in 1971 that Penrose’s theory could be proven by using “twisted” light waves, which would create energy by hitting a rotating metal cylinder and utilizing the rotational Doppler effect.

While Zel’dovich’s approach also proved impractical, the scientists from the Glasgow University’s School of Physics and Astronomy devised a setup of a small ring of speakers that twisted sound waves in a way similar to how he wanted to twist light. The advantage is that sound waves need a significantly slower rotating surface compared to light.

The team sent twisted sound waves towards a rotating sound absorber from a foam disk. Microphones positioned in the back of the disk captured the sound that passed from the speakers through the disc, which spun faster and faster.

What the scientists found was that this process produced clear changes in the frequency and amplitude of the sound waves, courtesy of the unusual behavior of the Doppler effect, which normally describes how for example, the pitch of a siren from an emergency vehicle seems to rise as it heads towards you but drops when it moves away. This happens because sound waves come at you with more frequency when the ambulance closes in, but less so after it goes past.

The paper’s lead author, Marion Cromb, a Ph.D. student in the University’s School of Physics and Astronomy, explained that rotation transforms this linear effect and pulls in energy. “The rotational doppler effect is similar, but the effect is confined to a circular space,” he pointed out. “The twisted sound waves change their pitch when measured from the point of view of the rotating surface. If the surface rotates fast enough then the sound frequency can do something very strange—it can go from a positive frequency to a negative one, and in doing so steal some energy from the rotation of the surface.” 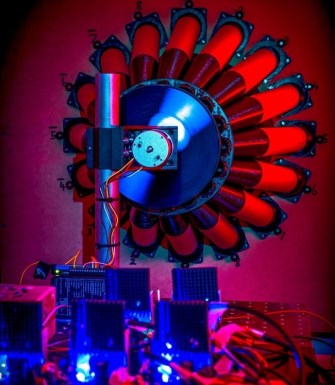 The set-up of the experiment. Credit: University of Glasgow

The researchers were able to show that as they increased the speed of the spinning disc, the pitch of the sound kept dropping until it disappeared, then it came back up to 30 percent louder than before.

Marion called what they heard during the experiment “extraordinary,” adding that the “negative-frequency waves are capable of taking some of the energy from the spinning foam disc, becoming louder in the process—just as Zel’dovich proposed in 1971.”

The researchers are planning to investigate whether this effect extends to other sources like electromagnetic waves.

Check out their new paper “Amplification of waves from a rotating body” in Nature Physics.

Tags
astronomyblack holecosmosenergyphysicsplanetsspaceuniverse
In this article
astronomyblack holecosmosenergyphysicsplanetsspaceuniverse
Related
Starts With A Bang
This shockingly simple battery could store energy forever
Capacitors, acid batteries, and other methods of storing electric charges all lose energy over time. These gravity-fed batteries won’t.
The Future
7 major science and tech breakthroughs of 2022
It was a particularly good year for biotech and medical technology. There were also notable advances in energy.
The physics of entropy and the origin of life
How did complex systems emerge from chaos? Physicist Sean Carroll explains.
▸
6 min
—
with
Sean Carroll
The Future
Paper-thin solar cell can turn any surface into a power source
Some solar cells are so lightweight they can sit on a soap bubble.
The Future
New battery is cheaper than lithium-ion with four times the capacity
Lithium-ion batteries pose challenges for our transition toward renewable energy. Sodium-sulfur batteries might be a solution.
Up Next
The Present
How governments are responding to the public’s demand for more data transparency
Innovative use of blockchain tech, data trusts, algorithm assessments, and cultural shifts abound.