A gaming surge has begun. Steam, an online gaming marketplace, has seen record numbers of concurrent players over the past week, landline networks in Italy have seen a 70 percent increase in traffic, and console games are drawing millions more, as the world adjusts to life at home. Since we’re all locked in until the end of the coronavirus crisis, these are the free games your brain might be craving in the midst of social isolation.

New York-based game designer
Bennett Foddy‘s programs are about the neurological sorcery in gaming that allows players to embody the subjects on the screen. Foddy’s creations, many of which are free to play via the flash-enabled internet browser of your choice, are not overly intense or for “hard-core gamers.” They’re light-hearted, addictive, and have limited controls that are easy for non-gamers to pick up on, though mastery is not so simple. The gaming wizard’s latest creation, Get On Top, is a game hidden in his 2016 gaming time capsule Sportsfriends. The two-player browser version uses your keyboard for input, with arrow keys controlling one figure and AWD controlling the other. “It’s designed to sit with one other person and play for hours,” the website explains. (Learn how to enable Flash here).

QWOP
, one of Foddy’s more popular creations, is a simple and diabolically addictive game about sprinting down the straightaway on a track. It can be played on PC or a smartphone mobile browser. The screen shows a man lined up to race the 100 meter dash, and you must press the QWOP keys to manipulate his left and right calf and thigh muscles to (hopefully) propel him forward as fast as you can. (The cult classic game was even featured on the U.S. version of The Office on the sitcom’s season 9 premiere.) In 2012, it was updated so that it could be played with two people at once. 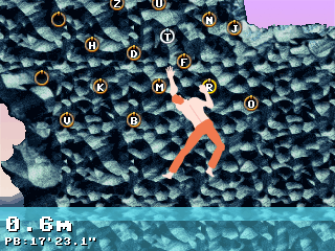 In a 2011 piece for WIRED UK, Mark Brown wrote that Foddy’s games are about “turning gaming’s heavily abstracted and automated actions – like running forward or scaling a perilous cliff face – into brutal simulations of the most intense micromanagement.”

For Foddy, it’s about playing with perceptions of sensation to explore how gamers come to embody the digital characters in the game.

“When you play a ,” Foddy explained, “as long as there is a very short time between your formation of an intention to act and something happening on screen, there’s a kind of neurological magic which makes you feel like you are the character, rather than just controlling a little guy on a screen.” QWOP is unique in that it does this by making a “deliberate disconnect between your intentions and the character’s actions.”

Another of Foddy’s games, GIRP, enhances the experience of embodiment. The game, whose hero is a rock climber, turns your keyboard into a cliff face. The player needs to finger-tip grip the keyboard as if he or she is white-knuckle clinging to a cliff. In this way, when you play this game you phenomenologically become the daring climber as your consciousness moves through the electronic space in the virtual reality of the game.

Foddy, who studied addiction at Oxford, designed GIRP to hijack the neurological reward-system by allowing players to set their own achievable goals in the game. WIRED’s Brown described GIRP as “maddeningly compulsive.”

Video games can change how our brains perform and their structural makeup. A 2017 study published in Frontiers in Human Neuroscience showed that video game players display enhancements in several types of attention such as sustained attention (the ability to focus on an activity over a long period of time), divided attention (focusing on multiple pieces of information at once), and selective attention (the process of focusing on a particular object in the environment for a certain period of time). Moreover, the areas of the brain that play a role in attention are more efficient in video game players as compared with non-gamers. Gamers also don’t require as much activation to stay focused on demanding tasks.

There is evidence that gaming increases the size and competence of regions of the brain that are responsible for visuospatial skills, or an individual’s ability to identify visual and spatial relationships among objects (for example, hitting a ball zooming towards you with a baseball bat before it smacks you in the face). The 2017 research also suggests that video games that require players think spatially can increase the gray matter in the right hippocampus.

So go ahead and game the plague away. You can find Foddy’s games for free here.

Americans consume the most toilet paper in the world but it’s a very wasteful product to manufacture, according to the numbers.