A surprising byproduct of the coronavirus pandemic has been its effect on the availability of toilet paper. Americans and shoppers across the globe have vacuumed supermarket shelves, stockpiling toilet paper and other paper products with pre-apocalyptic urgency. The resulting shortage places focus on toilet paper and the wastefulness involved in its production and disposal.

Americans consume the most toilet paper in the world, using up about 34 million rolls per day. Annually, this amounts to about 36.5 billion rolls. Impressive numbers to say the least. Another important fact to consider is that as much as 70% of the world does not use toilet paper, so obviously there are other solutions.

The Scientific American reported it takes about 473,587,500,000 gallons of water to produce all that toilet paper for Americans and 253,000 tons of chlorine to bleach it. In terms of electricity, the manufacturing requires about 17.3 terawatts of electricity annually.

To break this down further, it takes up to 37 gallons of water to make a single roll of toilet paper. That same single roll of TP also requires 1.3 kilowatt/hours (KWh) of electricity and 1.5 pounds of wood to make.

This chart from Statista highlights 2018 data on toilet consumption around the world, with North America coming in decidedly ahead of other parts of the world. 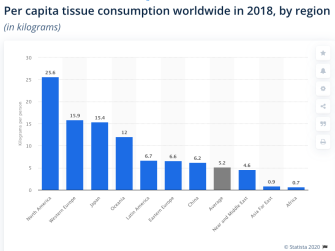 In terms of per-country consumption, Germany, UK and Japan also use up a lot of toilet paper every year as this chart shows — 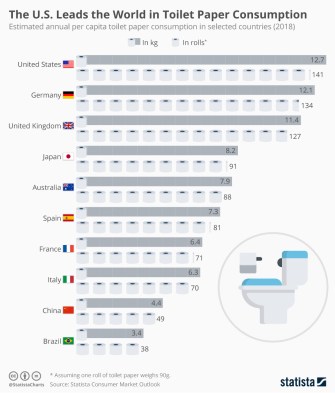 While Americans clearly love toilet paper, there’s no big danger of it truly running out any time soon, say the experts. The shortages we’ve all experienced are related to a spike in demand, but the overall pipeline is not affected and will continue to churn out the precious product.

What to do instead of toilet paper?

Install a bidet. You knew this option was coming. In light of the toilet paper shortages, Americans are actually showing more interest in adopting them, with bidet sales growing eight times. There are a number of great sustainable bidet companies like Tushy you can turn to. They also grow their toilet paper from bamboo and utilize no plastic wrapping. Bamboo is rapidly renewable and compared to regular trees, absorbs about 30% less carbon dioxide.

While bidets also incur some environmental costs from the use of water, on the whole they are significantly less resource-hungry and waste-producing than the process of making toilet paper. A bidet uses up about one eighth of a gallon of water to clean and flush.

Here are some more bidets ideas.

A few snapshots of the toilet paper crunch around the world: A senior citizen gets the last pack of toilet rolls at Sainsbury’s Supermarket on March 19, 2020 in Northwich, United Kingdom. Photo by Christopher Furlong/Getty Images 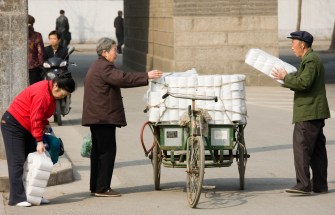 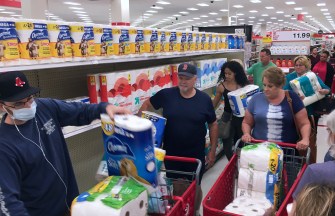 Tags
consumerismcoronavirusEconomyenvironmentpublic healthresourcesvirus
In this article
consumerismcoronavirusEconomyenvironmentpublic healthresourcesvirus
Related
Life
Strange life forms create an “alien” ecosystem in an abandoned uranium mine
Slimy biofilms made up of bacterial and eukaryotic life forms have taken over an abandoned, flooded uranium mine in Germany.
The Present
Climate change is altering the chemistry of wine
Smoke taint from wildfires is gross, even to wine amateurs.
Life
Our antidepressant drugs are affecting animals and ecosystems
A toxicologist explains the impacts of antidepressants on fish — and no, they’re not getting any happier.
Hard Science
200 years of exploring Antarctica
What we’ve learning from the world’s coldest, most forbidding, and most peaceful continent.
Life
Most of the seafloor is a thick graveyard of ooze
Each year, several trillion pounds of microscopic silicon-based skeletons fall down the water column to pile up into siliceous ooze.
Up Next
Hard Science
Gamma-ray space telescope study may have spotted dark matter
New study of gamma rays and gravitational lensing points to the possible presence of dark matter.