We’ve all been caught unawares by our digestive tract at one time or another.

It happened to the Nash family several months ago. We were nearing the end of an extended road trip, driving down a secondary highway through a sparsely populated area of Colorado at night, when one of my 9-year-old twin sons had to use the bathroom. Despite my pleading, he said he couldn’t make it to the next town. (He had to poop.) So we pulled over and headed for the bushes. After he took care of his business, we realized that we didn’t have toilet paper with us.

The whole dramatic episode got me thinking, and for the next couple of hours, I pondered toilet paper and the cultural nature of bathroom routines. (Cut me some slack. It was a long drive.)

Toilet paper is now such a routine part of our lives that we rarely give it any thought. That boring reality, however, should make us think—because toilet paper is an artifact, a technology, and is therefore grounded in culture.

As we finally re-entered Denver—my wife and kids blissfully asleep—I saw the Colorado state capitol building, beautifully lit on the horizon. I started thinking about the ancient Romans. With tall columns, colonnades, and a high, golden dome, the capitol is nothing if not a Roman temple to civics.

Modern American society, and Western societies more generally, tend to look back on ancient Rome as the pinnacle of Western civilization. We emulate their institutions and cultural practices. Why? Are they worth it?

When I thought more about their everyday habits, I realized that, despite all of their accomplishments, ancient Romans engaged in some practices that many people today would find thoroughly revolting. Take a minute to consider, for example, what many of those supposedly “civilized” people did when they had to go to the bathroom.

When Mt. Vesuvius erupted on August 24 in A.D. 79, Pompeii, Herculaneum, and other Roman settlements were sealed as time capsules. They were first excavated in the 18th century, and since then these sites have given us a wonderful view into ancient Roman society.

Many of the bathrooms uncovered at Pompeii and elsewhere were communal. In many cases, they were beautiful, with frescoes on the walls, sculptures in the corners, and rows of holes carved into cold, Italian marble slabs.

Roman toilets didn’t flush. Some of them were tied into internal plumbing and sewer systems, which often consisted of just a small stream of water running continuously beneath the toilet seats.

In the same way that we use an American-style toilet, a Roman user would sit down, take care of business, and watch number two float blissfully away down the sewer system. But instead of reaching for a roll of toilet paper, an ancient Roman would often grab a tersorium (or, in my technical terms, a “toilet brush for your butt”). A tersorium is an ingenious little device made by attaching a natural sponge (from the Mediterranean Sea, of course) to the end of a stick. Our ancient Roman would simply wipe him- or herself, rinse the tersorium in whatever was available (running water and/or a bucket of vinegar or salt water), and leave it for the next person to use. That’s right, it was a shared butt cleaner. (And of course, there were other means of wiping as well, such as the use of abrasive ceramic discs called pessoi.) 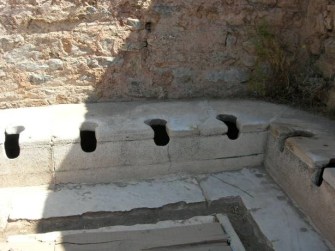 OK, so ancient Roman pooping habits seem strange, but what about their customs around pee?

As best we can tell from historic and archaeological data, ancient Romans peed in small pots in their homes, offices, and shops. When those small pots became full, they dumped them into large jars out in the street. Just like with your garbage, a crew came by once a week to collect those hefty pots of pee and bring them to the laundromat. Why? Because ancient Romans washed their togas and tunics in pee!

Human urine is full of ammonia and other chemicals that are great natural detergents. If you worked in a Roman laundromat, your job was to stomp on clothes all day long—barefoot and ankle deep in colossal vats of human pee.

(Frankly, I wonder why we haven’t emulated this aspect of Roman culture in our age of green, eco-friendly, and sustainable businesses. I’m thinking of opening a chain called Urine-Urout All-Natural Laundromat. It’s a sparkling business opportunity!)

As peculiar as personal hygiene practices in ancient Rome may seem to us, the historical fact is that many Romans successfully and sustainably used tersoria and washed their clothes in pee for several centuries—far longer than we’ve used toilet paper. Indeed, toilet paper is not a universal technology even today, as any trip to India, rural Ethiopia, or remote areas of China will make abundantly clear.

The memorable stop we made for my son in rural Colorado will always remind me of our culture’s widespread dependence on toilet paper. We’ve become so accustomed to the stuff that we are loath to consider widely used alternatives. (Heck, even the elegant bidet gets short shrift in our society.)

As an archaeologist, this is surprising to me, especially because toilet paper was formally introduced in this country only in 1857, a comparatively short time ago. At that time, New York entrepreneur Joseph Gayetty first created commercial toilet paper; each individual paper sheet bore his name. He claimed that, in addition to their novel utilitarian function, they were medicinal and prevented hemorrhoids.

In 1890, Clarence and E. Irvin Scott developed the first toilet paper on rolls; their brand thrives today. (It happens to be my favorite. Too much information?) Like Gayetty’s sheets, Scott tissue was originally marketed as a medicinal product. In the late 1920s, Hoberg Paper Company marketed Charmin brand toilet paper to women, with an emphasis on softness (thank goodness) and femininity, rather than medicinal properties that didn’t actually work.

Today, toilet paper is ubiquitous in Western cultures; it’s a US$9.5 billion-a-year industry in the United States. Americans, in their typical excess, use more than 50 pounds per person per year! About 1.75 tons of raw fiber are required to manufacture each ton of toilet paper. That doesn’t seem sustainable, and frankly, I’m surprised that people haven’t protested more as a result.

Given these numbers and the marketing efforts behind them, it’s hard to argue that the use of toilet paper is somehow natural. On the contrary, toilet paper is nothing more than a technology. So the next time you’re enjoying a morning constitutional, think about the fact that defecation and urination are more than biological functions; they are cultural activities that involve artifacts and technologies that change through time.

Speaking of which, it’s high time that we consider changing how we clean ourselves after we use the toilet. Tersorium, anyone?

An earlier version of this piece used the term “tersoriums” for the plural form of “tersorium.” After scrubbing for more information, we confirmed that “tersoria” is the correct plural form of the term. The text has also been updated to clarify that the butt-brush “cleaning” ritual varied and to note that tersoria were certainly not the only means ancient Romans used to clean themselves after defecation. We don’t mean to be abrasive, but it’s impossible to convey all the minutiae of personal hygiene practiced by the ancient Romans. (And would you really want to know more?)

This work first appeared on SAPIENS under a CC BY-ND 4.0 license. Read the original here.

In the Canaan religion, Yahweh was a lesser god, who was assigned the land of Israel. Here’s how he became “God Almighty.”
Up Next
The Present

The coronavirus pandemic offers online education companies a chance to prove themselves.