By comparing data derived from gravitational lensing and gamma ray observations by the Fermi Gamma-ray Space Telescope, a study showed that certain regions of the sky emit more gamma rays. While the main cause of this phenomenon may be supermassive black holes, the researchers think that some of the emissions may be because of dark matter. It’s a so-far-undetected substance that supposedly takes up as much as 27% of all matter in the Universe, with dark energy taking up another 68% (as per NASA).

The study builds on nine years of gamma-ray data from the Large Area Telescope (LAT) that’s part of the Fermi space observatory, and was carried out by Simone Ammazzalorso at the University of Turin in Italy, Daniel Gruen at Stanford University in California, and colleagues.

The data from the telescope previously pinpointed many individual gamma-ray sources, like the remains of supernova explosions or jets of ionized matter called blazars created from accretion of material by supermassive black holes.

While many sources were located, some of the radiation that was detected by the LAT could not be traced. To investigate this, Ammazzalorso and the team of researchers compared gamma-ray background data with the first-year data from the Dark Energy Survey, carried out by the Dark Energy Camera on the Victor Blanco 4-m Telescope in Chile, which took optical snapshots of 40 million galaxies.

The research team was trying to figure out if there’s a correlation between the location of gravitational lenses and gamma ray photons. Gravitational lensing measures the distribution of the Universe’s matter by utilizing an effect predicted by Einstein. The effect takes place when light traveling to Earth from a distant object is distorted by the gravitational pull of the matter on the way.

The Difference Between Quasars, Blazars, Pulsars and Radio Galaxies

The Difference Between Quasars, Blazars, Pulsars and Radio Galaxies

Comparing two sets of data, the scientists realized that regions of the sky with more matter were also responsible for emitting more gamma rays. On the flip side, the regions that were less dense produced fewer gamma rays.

Specifically, the researchers observed this relationship holding at at high energies and small angular scales, as reports Physics World. Blazars were likely the cause of these kinds of gamma ray emissions, according to the physicists.

The scientists spotted a weaker version of this kind of emission at larger angular scales. This other source of the gamma rays was likely dark matter, thinks Francesca Calore, an astroparticle physicist at Annecy-le-Vieux Theoretical Physics Lab in France, who wrote a commentary for the new paper.

“This result is exciting as it marks one of the few hints at the existence of dark matter via indirect detection methods, and it opens up new possibilities for probing dark matter particle models,” said Calore.

She warned that there is still a chance the noticed correlation could be due to blazars, which are still not completely understood. 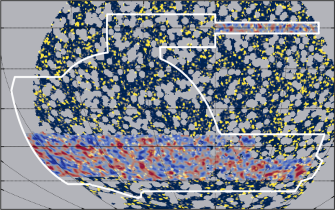 An overlap of gravitational lenses and gamma-ray signals could indicate the presence of dark matter.

New data that will be released from the Dark Energy Survey, including 100 million galaxies, as well as other upcoming sky research like the Legacy Survey of Space and Time at the Vera Rubin Observatory in Chile should shed more light on the matter.

“With deeper redshift coverage and a better angular resolution, future instruments will enable scientists to better understand the sources behind the universe’s gamma-ray glow and, potentially, uncover the nature of dark matter,” Calore stated.

Check out the new study in Physical Review Letters.

Tags
astronomyastrophysicsdark matternasaphysicsspacetechnologytelescopeuniverse
In this article
astronomyastrophysicsdark matternasaphysicsspacetechnologytelescopeuniverse
Related
The Well
This is what the fourth dimension looks like
Left–Right, Back–Forth, Up–Down. What’s the fourth dimension?
▸
3 min
—
with
Brian Greene
13.8
Why stars never collide and galaxies always do
We only need two numbers to understand why.
The physics of entropy and the origin of life
How did complex systems emerge from chaos? Physicist Sean Carroll explains.
▸
6 min
—
with
Sean Carroll
The Universe in 90 minutes: The Multiverse, time, free will, God, & more
Everything you ever wanted to know about the Universe, explained by physicist Sean Carroll.
▸
1:33:47 min
—
with
Sean Carroll
Life
“I went to space and discovered an enormous lie”
What astronaut Ron Garan saw in space changed his life forever – here’s what it taught him.
▸
8 min
—
with
Ron Garan
Up Next
Starts With A Bang
Ask Ethan: If Einstein Is Right And E = mc², Where Does Mass Get Its Energy From?
It isn’t just that mass and energy are equivalent and interchangeable. It tells us something fundamental about mass itself.Of all the equations that we use to describe the Universe, perhaps the […]