Single-use plastics — among them, straws, cutlery, shopping and sandwich bags — are small, but they have a huge impact on the environment. The vast majority of these plastics end up in landfills or the ocean, where they can take hundreds or thousands of years to decompose.

And when you consider that the world consumes about 1 million plastic bottles per minute, the implications of plastics consumption are pretty staggering.

To help offset these environmental costs, University of Sussex graduate Lucy Hughes recently used fish waste to create a compostable alternative to single-use plastic. The translucent material, called MarinaTex, is made from fish scales and skin – materials that break down in food-waste bins within about four to six weeks. MarinaTex is also flexible and durable, showing a higher tensile strength than LDPE (low-density polyethylene), which is the most commonly used material in single-use plastic bags.

“This shows that the sustainable option does not sacrifice quality,” said Hughes, who won this year’s U.K. James Dyson Award, a prize that promotes young British designers and engineers.

Hughes conducted more than 100 experiments to devise her final design, which uses agar, a gelatinous substance found in the cell walls of red algae, as a binding agent. One Atlantic cod contains enough waste to produce 477 MarinaTex bags, according to Hughes. 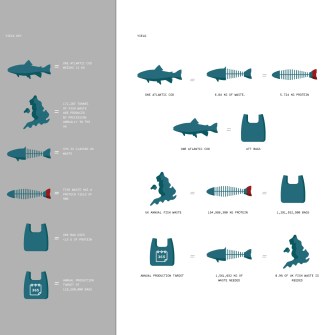 “I didn’t want to use virgin natural materials so I challenged myself with starting with a waste stream,” Hughes said. “For me a good design is something that bridges the gap between behaviors, business and our planet.”

Hughes said many people have a disconnect about the world’s oceans.

“When you see bits of rubbish in the ocean, or when you see that environment be sort of soiled by waste, it’s kind of an eye-opener.”

Hughes was awarded about $2,500 for winning the national contest, and she’s in the running to win the international award. Last year’s winners were Nicolas Orellana and Yaseen Noorani, who created the O-Wind Turbine.

Reducing waste from single-use plastics has recently become more of an environmental priority for individuals (the no-straw movement) and governments alike. In August, India announced plans to soon ban six single-use plastic products: bags, cups, plates, small bottles, straws and types of sachet. The move, which is the nation’s most sweeping plastics regulation to date, is expected to reduce India’s plastic consumption by 5 to 10 percent.

Parasites aren’t limited to just worms and ticks. Even some plants like to feed off others — and they perhaps could help fight invasive species.
The Future

Are we really only a moment away from “The Singularity,” a technological epoch that will usher in a new era in human evolution?
Life

Social conflicts can leave molecular marks on animals, according to recent research on the ant species Harpegnathos saltator.
Up Next
Strange Maps

Why Germany is a blank spot on Google’s Street View

There are good historical reasons why Germans are suspicious of surveillance — but is Google as bad as Gestapo or Stasi?