Imagine everyday citizens engaging in the democratic process. What images spring to mind? Maybe you thought of town hall meetings where constituents address their representatives. Maybe you imagined mass sit-ins or marches in the streets to protest unpopular legislation. Maybe it’s grassroot organizations gathering signatures for a popular referendum. Though they vary in means and intensity, all these have one thing in common: participation.

Participatory democracy is a democratic model that emphasizes civic engagement as paramount for a robust government. For many, it’s both the “hallmark of social movements” and the gold standard of democracy.

In her bookHearing the Other Side: Deliberative Versus Participatory Democracy, Mutz argues that participatory democracy is best supported by close-knit groups of like-minded people. Political activism requires fervor to rouse people to action. To support such passions, people surround themselves with others who believe in the cause and view it as unassailable.

Alternative voices and ideologies — what Mutz calls “cross-cutting exposures” — are counterproductive to participation because they don’t reinforce the group’s beliefs and may soften the image of the opposing side. This can dampen political zeal and discourage participation, particularly among those averse to conflict. To prevent this from happening, groups can become increasingly intolerant of the other side.

“You can have a coup and maximize levels of participation, but that wouldn’t be a great thing to do. It wouldn’t be a sign of health and that things were going well.”

As the book’s title suggests, deliberative democracy fosters a different outlook for those who practice it. This model looks toward deliberation, communication, compromise, and consensus as the signs of a resilient democracy. While official deliberation is the purview of politicians and members of the court, it’s worth noting that deliberative democracy doesn’t mean inactivity from constituents. It’s a philosophy we can use in our daily lives, from community memberships to interactions on social media.

Mutz’s analysis leads her to support deliberation over activism in U.S. politics. She notes that the homogeneous networks required for activism can lead to positive changes — again, there are many historical examples to choose from. But such networks also risk developing intolerance and extremism within their ranks, examples of which are also readily available on both the right and left.

As Mutz writes: “Hearing the other side is also important for its indirect contributions to political tolerance. The capacity to see that there is more than one side to an issue, that political conflict is, in fact, a legitimate controversy with rationales on both sides, translates to greater willingness to extend civil liberties to even those groups whose political views one dislikes a great deal.” 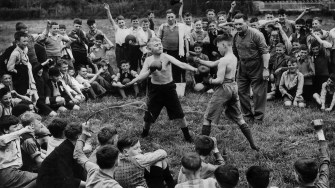 Take that! A boxing bout between two members of a schoolboys’ summer camp at Pendine, South Wales, takes place in a field within a ring of cheering campmates.

Of course, listening openly and honestly to the other side doesn’t come naturally. Red versus blue. Religious versus secular. Rural versus cosmopolitan. We divide ourselves into polarized groups that seek to silence cross-cutting communication in the pursuit of political victory.

“The separation of the country into two teams discourages compromise and encourages an escalation of conflict,” Lilliana Mason, assistant professor of Government and Politics at the University of Maryland, writes in her bookUncivil Agreement: How Politics Became Our Identity. “The cooperation and compromise required by democracy grow less attainable as partisan isolation and conflict increase.”

Almost immediately, the boys identified members of the other team as intruders. As the tournament continued, the conflict escalated beyond sport. The Eagles burned a Rattlers flag. The Rattlers raided the Eagles’ cabin. When asked to describe the other side, both groups showed in-group favoritism and out-group aggression.

“We, as modern Americans, probably like to think of ourselves as more sophisticated and tolerant than a group of fifth-grade boys from 1954. In many ways, of course, we are,” Mason writes. “But the Rattlers and the Eagles have a lot more in common with today’s Democrats and Republicans than we would like to believe.” 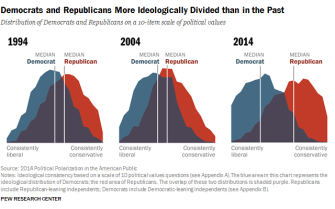 In her book, Mason points to research that shows an “increasing number of partisans don’t want party leaders to compromise,” blame “the other party for all incivility in government,” and abhor the idea of dating someone from outside their ideological group.

And let’s not forget Congress, which has grown increasingly divided along ideological lines over the past 60 years. 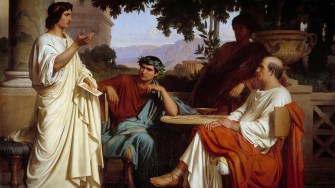 A zero-sum mindset may be inevitable in a summer camp tournament, but it’s detrimental if taken into wider society and politics. Yet if participatory democracy leads to the silencing of oppositional voices, a zero-sum mindset is exactly what we get. Conversely, creating networks that tolerate and support differing opinions offers non-zero benefits, like tolerance and an improvement of one’s understanding of complicated issues.

“Right now, I’m definitely on the side of greater deliberation rather than just do whatever we can to maximize levels of participation. You can have a coup and maximize levels of participation, but that wouldn’t be a great thing to do. It wouldn’t be a sign of health and that things were going well. Democracy [must be] able to absorb differences in opinion and funnel them into a means of governing that people were okay with, even when their side didn’t win.”

Unfortunately, elected officials and media personalities play up incivility and the sense of national crisis for ratings and attention, respectively. That certainly doesn’t help promote deliberation, but as Mutz reminded us, people perceive political polarization to be much higher than it actually is. In our daily lives, deliberative democracy is more commonplace than we realize and something we can promote in our communities and social groups.

Then there’s social media. The popular narrative is that social media is a morass of political hatred and clashing identities. But most social media posts have nothing to do with politics. An analysis of Facebook posts from September 2016, the middle of an election year, found the most popular topics centered on football, Halloween, Labor Day, country music, and slow cookers.

And what of political partisanship and prejudice? In an analysis of polarization and ideological identity, Mason found that labels like “liberal” and “conservative” had less to do with values and policy attitudes – as the majority of Americans agree on a substantial number of issues – and more to do with social group identification.

Yes, we all know those maps that media personalities dust off every election year, the ones that show the U.S. carved up into competing camps of red and blue. The reality is far more intricate and complex, and Americans’ intolerance for the other side varies substantially from place to place and across demographics.

So while participation has its place, a healthy democracy requires deliberation, a recognition of the other side’s point of view, and the willingness to compromise. Tolerance may not make for good TV or catchy political slogans, but it’s something we all can foster in our own social groups.

Tags
braindebatedemocracymindpersonal growthpoliticsspeechunited states
In this article
braindebatedemocracymindpersonal growthpoliticsspeechunited states
Related
How dirty debaters win against better opponents
How to defeat debaters who deal in distractions, according to a two-time world debate champion.
▸
5 min
—
with
Bo Seo
Neuropsych
How do lie detectors work?
Experts explain how lie detectors work, what happens in the brain when we tell lies and how accurate polygraph tests are.
Debate world champion: Why agreement is overrated
Our impulse to seek out agreement is stifling us, says world debate champion Bo Seo.
▸
4 min
—
with
Bo Seo
Debate world champion explains how to argue
Bo Seo, Harvard’s former debate coach, explains a good argument.
▸
5 min
—
with
Bo Seo
Health
Stockdale Paradox: Why confronting reality is vital to success
Balancing realism and optimism in a dire situation is a key to success.
Up Next
Health
Johns Hopkins opens center for psychedelic research
Moving the needle forward on psychedelic research.