On a July day in 1518, a woman named Frau Troffea began to dance in the streets of Strasbourg, part of the Holy Roman Empire in modern-day France. There wasn’t all that much to do for entertainment in medieval Strasbourg, so this diversion was met with enthusiasm by passers-by. Frau Troffea was spinning, twisting, jumping, all without music. It was entertaining to watch, until it wasn’t.

Six days later, Frau Troffea was still going. She hadn’t slept or eaten. Day or night, rain or shine, Frau Troffea couldn’t stop dancing. This alone would have been cause for alarm, but suddenly people began to join her in her relentless dance. At first it was a crowd of 34. Then, by the end of the month, it was 400. People began to drop like flies, overwhelmed by the constant exhaustion. The lucky ones merely lost consciousness, snapping themselves out of their strange affliction. The less fortunate died of heart attacks.

In the hopes of wearing the dancers out, the Strasbourg city council decided to build a stage and hire musicians. Their theory was that the dancers had fevers, “hot blood” that could only be cured by dancing it out. This was obviously a terrible idea: the performance merely encouraged more citizens to join the crazed dancers. At its height, some sources claim the dancing was killing up to 15 people per day, and it seemed like it would go on forever. It was terrifying, until it wasn’t; one day, the worst-afflicted dancers were taken away to a shrine, where they eventually stopped dancing. Without them, the remaining dancers slowly stopped as well. 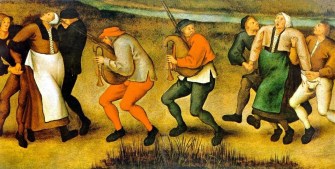 A painting by Pieter Brughel the Younger depicting an instance of dancing mania.

That the “dancing plague” of 1518 occurred is certain. Numerous historical documents from various sources confirm that, indeed, hundreds of Strasbourgeoise began to uncontrollably dance—doctor’s notes, church sermons, notes from the city council, and other texts all confirm similar details.

What isn’t clear is what caused this to happen. Ergot poisoning is one culprit: The fungi grows on rye and, when baked into bread and consumed, acts very similarly to LSD, albeit deadlier. Although ergot poisoning does produce psychoactive effects, it’s far more likely to kill its victims than to give them the stamina to dance for a month straight.

Rather than attribute the dancing plague to one easily understood culprit, other scholars assert that it belongs to a class of poorly understood psychological phenomena called mass psychogenic illnesses — more commonly known as mass hysteria.

Mass psychogenic illnesses are thought to come about as a group response to stress, and Strasbourg had certainly had plenty of things to be stressed about in 1518. John Waller explained in an article for The Lancet:

The people of Strasbourg and its environs were […] experiencing acute distress in 1518, after a succession of appalling harvests, the highest grain prices for over a generation, the advent of syphilis, and the recurrence of such old killers as leprosy and the plague. Even by the gruelling standards of the Middle Ages, these were bitterly harsh years for the people of Alsace.

Other kinds of mass psychogenic illness

In 1374, thousands of villagers along the Rhine river fell into a dancing mania, screaming in agony as they went along. In 1237, a group of children from German city of Erfurt leapt and danced 20 kilometers (12 miles) to the neighboring town of Arnstadt before collapsing in exhaustion.

Mass psychogenic illnesses have taken many forms over the years. Between the 15th and 19th centuries, nuns from disparate nunneries would climb trees and meow like cats, bark like dogs, imitate lewd sexual behavior, and generally act as though they were possessed. Even in Salem, young girls fell into strange “fits” that spurred on the witch trials, which some have interpreted as mass psychogenic illness.

Although dancing plagues seemed to have ceased with the close of the Middle Ages, mass psychogenic illnesses have occurred throughout history. In 1962, around 1,000 Tanzanians began to laugh uncontrollably, sometimes for up to 16 days at a time. The epidemic only ended 18 months later. In 1983, close to 1,000 Palestinians began to faint and feel dizzy. They blamed some kind of Israeli chemical warfare, but the nature of the affliction and its spread throughout the populace forced investigators to conclude that had a chemical attack occurred, it could only have caused 20 percent of the reported cases.

The trouble with mass psychogenic illnesses is that they occur too rarely to observe in the field, and there’s no way to predict when they will. What causes them and what makes them go away are complete unknowns. At the very least, they underscore how profoundly incomplete our understanding of human psychology is.

Talking to yourself seems to yield real benefits, from boosts in cognitive performance to improved emotional regulation.
Up Next
Health