Recent years have seen a monumental shift in conversion therapy’s standing in society. In 2017, the New York City Council passed an ordinance banning anyone from charging a fee for conversion therapy services. Last year, Utah became the 19th state to outlaw conversion therapy for minors, with support from the Church of Jesus Chris of Latter-day Saints. Twenty-three more states have legislation pending, and former president Obama even floated the idea of a nationwide ban in his second term.

While progress has been undeniable and hard-fought, it may also feel disenchanting given the time we’ve had to course correct. The American Psychiatric Association (APA) declassified homosexuality as a mental illness in 1973, and we’ve long known that such therapies are far from efficacious. The customary outcome is the opposite of rehabilitation: mental anguish compounded by lingering homosexual urges and social abjection.

So, if conversion therapy lacks mainstream approval, why hasn’t it been banned? 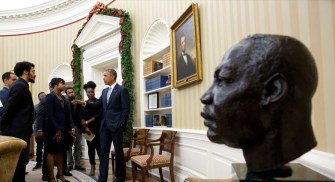 Though former president Obama floated the idea of a nationwide ban on conversion therapy, it never came to fruition during this term.

What exactly is conversion therapy?

Conversion therapy seeks to “cure” homosexuals and bisexuals by changing their sexual orientation to heterosexual. That’s as close as we can get to a unifying definition, because the principles and practices diverge wildly beyond that core goal.

The therapist could be a religious individual who views homosexuality through the lens of sin or a family member hoping to correct a wayward child. Psychiatrists and clinical psychologists may also practice conversion therapy, but since homosexuality is not a classified mental disorder, their beliefs vary with their school of theory.

A psychoanalytic approach, for example, may assert homosexuality to be a divergence from normal psychosexual development—the classic, and ill-substantiated, Freudian tale of the absent father and over-doting mother.

The so-called treatments are no less varied.

Aversive conditioning, for example, may ask a patient to wear a rubber band around their wrist and snap themselves whenever a homosexual urge or thought arises. In more extreme forms, patients will be shown homosexual images while the therapist instigates a noxious sensation, such as an electric shock or nausea-inducing drug. Cessation of the negative stimuli may then be paired with opposite-sex erotica—with the goal of strengthening the patient’s preference for heterosexual feelings.

Sam Brinton, who underwent conversion therapy as a middle-school student in the early 2000s, recounts his aversive conditioning in a New York Times op-ed:

The therapist ordered me bound to a table to have ice, heat, and electricity applied to my body. I was forced to watch clips on a television of gay men holding hands, hugging and having sex. I was supposed to associate those images with the pain I was feeling to once and for all turn into a straight boy. In the end, it didn’t work. I would say that it did, just to make the pain go away.

Other techniques include shaming, spiritual interventions, fantasy modification, and social-skills training, such as teaching patients to act more gender normative or how to ask out the opposite sex. While not physically harmful, these treatments cultivate feelings of depression and social isolation in the patient.

“Individuals undergoing such treatments do not emerge heterosexually inclined; rather, they become shamed, conflicted, and fearful about their homosexual feelings,” writes Douglas C. Haldeman, a counseling psychologist and former member of the APA Board of Directors. Such procedures applied to any other patient, he reminds us, would be aptly labeled as torture. 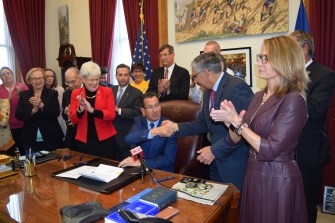 In 2017, Dannel Malloy, then governor of Connecticut, signed into law the state’s ban against practicing conversion therapy on minors.

Is there evidence that conversion therapy works?

All told, 698,000 LGBT adults in the U.S. have received conversion therapy in some form, according to a Williams Institute report. While some studies and testimonials purport to have successfully altered some of their sexual orientations, such claims crumble when one examines the slipshod methodology and flawed data gathering.

In an examination of the evidence, Haldeman found several methodological flaws. These included using only clinical samples, a lack of replicability, poor assessment of sexual orientation, and outcomes substantiated by internal validation rather than external data.

Many studies, for example, hang their results on either therapist impressions or self-reporting. But such measurements cannot prove conversion. Therapists may cite a momentary drop in homosexual arousal as a full-fledged cure, while demeaned patients may report conversion in a bid to acquire personal and social validation.

“This reiterates one of the major objections to conversion studies: These interventions do not shift sexual orientation at all,” Haldeman writes. “Individuals undergoing such treatments do not emerge heterosexually inclined; rather, they become shamed, conflicted, and fearful about their homosexual feelings.”

Beyond a lack of methodological rigor, conversion therapy houses many ethical concerns. These include patient blaming, patient abandonment, indiscriminate treatments, breaches of confidentiality, and building informed consent on the subjective beliefs of the practitioner, not medical consensus.

Are Gay Rights Civil Rights? It May Depend on Where You Live

Given the history, the lack of evidence, the harm done, the ethics violated, and the changing times—given all of this—one would think a universal ban was soon to come. But that doesn’t appear to be the case.

Remember that New York City ordinance? The city council repealed it in 2019 after the Alliance Defending Freedom, a conservative Christian advocacy group, filed a lawsuit against the ordinance. The group claimed the ban infringed on people’s freedom of speech and religion.

“All New Yorkers and all Americans deserve the right to private conversations, free from government control,” Roger Brooks, senior counsel for the Alliance Defending Freedom, said in a statement. “By trying to regulate and censor private sessions between an adult and his counselor, New York City directly violated freedom of speech—a core right that the First Amendment protects.”

Council members chose to repeal the ordinance rather than risk it going to the Supreme Court, where they feared the court’s conservative alignment would set a precedent making future LGBTQ advocacy efforts more difficult.

And to gain backing from the Mormon church, the Utah bill had to stipulate an exception for clergy, religious counselors, and any child’s parent or grandparent who is also a mental health therapist.

“Progress is progress in this state. You kind of have to make some compromises,” Justin Utley, a conversion therapy survivor, told the Associated Press. “My concern, though, is clergy who are licensed professionals having this ability to justify conversion therapy by claiming that they’ve turned off the switch and now are acting as a clergy member instead of a licensed professional. That’s a very dangerous precedent.”

Utley’s concern is founded. A study published in the Journal of Homosexuality found that attempts by family members and religious leaders to change an LGBT adolescent’s sexual orientation can lead to multiple health and behavioral risks. The researchers found higher levels of depression compared to those who reported no conversion experience, as well as double rates of attempted suicide. Undergoing conversion therapy was also correlated with young LGBT adults attaining less education and lower socioeconomic status.

As Caitlin Ryan, director of the Family Acceptance Project and the study’s lead author, said in a release: “Although parents and religious leaders who try to change a child’s LGBT identity may be motivated by attempts to ‘protect’ their children, these rejecting behaviors instead undermine an LGBT child’s sense of self-worth, contribute to self-destructive behaviors that significantly increase risk and inhibit self-care, which includes constricting their ability to make a living.” 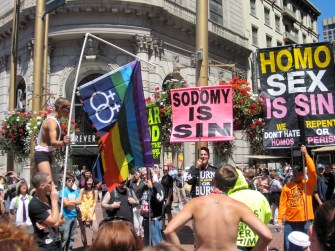 An 2010 anti-gay protest in San Francisco.

Can we find the balance?

Given all this: Will conversion therapy be banned in the U.S.? The answer is probably not—at least, a universal prohibition is unlikely.

As we saw with Utah and New York City, any universal ban would be viewed with skepticism and hostility by some religious organizations. Opponents will argue a person’s religious identity is a critical facet to their sense of self, and the government cannot institute legislation to revokes anyone’s right to cultivate that identity as they choose. And they have a point.

As Douglas Haldeman writes in a paper on the subject:

We sometimes forget, however, that religious identity and practice is a form of human diversity that is also often misunderstood and that deserves psychology’s attention. Although it is sometimes the case that attempting to combat scriptural references to homosexuality with psychological knowledge about the subject is like trying to have a conversation in two different languages, that does not mean that we should turn away from the conversation.

However, Haldeman also notes that the right to choose conversion therapy goes beyond religious orientation. It is often driven by the “internalized effects of a hostile family and an intolerant society” and a desire for acceptance.

How do we balance these seemingly competing needs?

First, a ban on conversion therapy for minors is necessary and widely supported. Children and adolescents need love, support, and the time to explore and grow into all facets of their identities. As Caitlin Ryan pointed out, conversion therapy disrupts this healthy process and replaces it with one of rejection and undermined self-worth that ripples well into adulthood.

“We’re building off several years of great success in the movement to protect youth from conversion therapy,” Casey Pick, senior fellow for advocacy and government affairs at The Trevor Project, told Forbes. “We’ve seen continued momentum because the stories of survivors are getting out there.”

Finally, improved education and understanding can disentangle the biases and social stigmas that push people to seek conversion therapy in the first place. In this regard, we are trending in the right direction. A 2012 Pew Research poll found that half of Americans now believe sexual orientation cannot be changed, while only 36 believe it can be.

“Ideally, the individual ultimately integrates sexual orientation and spirituality into the overall concept of identity by resolving anti-gay stigma internalized from negative experiences in family, social, educational, and/or vocational contexts” Haldeman concludes in his paper.

Even without laws banning conversion therapy, that’s still an idea we can strive for in society.

Tags
gayhealth carelawpolicypsychologyreligionselfSexsocial changeunited states
In this article
gayhealth carelawpolicypsychologyreligionselfSexsocial changeunited states
Related
High Culture
Why are flood myths so common in stories from ancient cultures around the world?
Could the prevalence of flood myths around the world tell us something about early human migration or even the way our brains work?
How to live after your soulmate has died
Astronomer Michelle Thaller explains the healing power of physics after losing her husband.
▸
7 min
—
with
Michelle Thaller
The Future
Space travel will radically change human psychology and spirituality
We are traveling in a realm that once exclusively belonged to the gods. Space travel will force humanity to rethink everything.
Neuropsych
Memory and the benefits of forgetting
Forgetfulness isn’t always a “glitch” in our memories; it can be a tool to help us make sense of the present and plan for the future.
The Learning Curve
5 Stoic quotes to help you through difficult times
“We suffer more often in the imagination than in reality.”
Up Next
Starts With A Bang
This One Equation, 10² + 11² + 12² = 13² + 14², Takes Pythagoras To A Whole New Level
Unbelievably enough, it all comes back to Pythagoras.One of the first theorems anyone learns in mathematics is the Pythagorean Theorem: if you have a right triangle, then the square of […]