In a win for LGBT+ individuals, the regional congress of Mexico City passed legislation banning conversion therapy throughout its jurisdiction. The vote took place virtually due to the current pandemic, and the bill enjoyed multi-party support. A medical practitioner who provides conversion therapy will now face five years of jail time for doing so, and more if they attempt the treatments on a minor.

The legislation is being celebrated as a win for the LGBT+ community. With it, Mexico City joins a handful of countries, states, provinces, and municipalities that have explicitly banned these dangerous procedures.

Conversion therapy refers to a wide array of procedures that ostensibly alter a person’s sexual orientation. These can include anything from trying to “pray the gay away” to aversion therapies that border torture. Variations of the idea of curing homosexuality have been around since the dawn of modern psychology. The amount of acceptance that the concept enjoyed waxed and waned as our understanding of sexuality evolved.

Sigmund Freud famously declared homosexuality “nothing to be ashamed of, no vice, no degradation” in a letter to the mother of a gay man who sought his help in “curing” her son. In the same letter, Freud expressed doubt that any therapy could reliably alter human sexuality in a meaningful way.

His daughter, an influential psychologist in her own right, felt differently, suggesting that such a treatment could exist and describing homosexual tendencies in terms of neurotic illness. In the United States, several psychologists argued that such behavior could be “cured” through a variety of procedures, such as electroshock treatment, lobotomy, aversive conditioning, and confrontational therapy often indistinguishable from abuse.

After Stonewall and the rise of modern views of human sexuality, most psychologists and their associations stopped considering homosexuality as a disease.

In the 21st century, the American Psychological Association asked its members to “avoid misrepresenting the efficacy of sexual orientation change efforts by promoting or promising change in sexual orientation when providing assistance to individuals distressed by their own or others’ sexual orientation.” Similar actions have taken place around the world. Recently, the United Nations’ expert on Sexual Orientation and Gender Identify called for a global ban on the practice.

Despite these efforts and others like them, some forms of conversion therapy continue to exist, and a few people still preach its benefits.

This is rather dangerous. While no widely accepted study demonstrates the effectiveness of conversion therapy, credible studies show its adverse outcomes. People who undergo these discredited treatments are at a higher risk of suicide, anxiety, depression, and drug use. 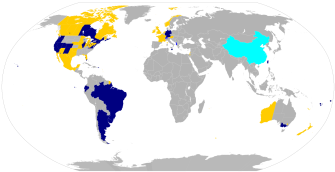 The above map shows the various places around the world where conversion therapy is banned, legal, or being challenged. Many of the locations shown in yellow are making significant progress towards a ban of this harmful group of procedures. As you might expect, the details of the laws in effect vary by location. Some of the prohibitions are de facto rather than explicit, some only apply to medical professionals carrying out these procedures, and some are enforced not by law but by the mutual agreement of psychologists.

The United Kingdom has taken substantial steps towards a ban, with the NHS and the major psychological and counseling associations of the UK condemning the practice. The government has promised to study the issue in detail before moving forward with legislation that could end the practice. Several organizations continue to advocate for law immediately settling the matter.

In India, Prince Manvendra Singh Gohil revealed that he had endured electroshock therapy as a young man after coming out to his less than supportive parents. Since coming out in 2006, he has worked with various charities to help LGBT+ individuals and even opened up his palace grounds for those who were forced out of their families for who they are. His opening up comes alongside protests in India against the practice.

In the United States, discussions of a ban have taken place in many areas not currently protected by one. LGBT+ organizations in those states without bans are actively campaigning for them. The state of Minnesota attempted to pass legislation to that effect last year, but that portion of the bill was cut out. Activists have taken to the local level as they prepare to try again.

Mexico City’s ban is entirely in character for a city with a reputation of a protector of LGBT+ rights. In 2009, it was the first place in Mexico to legalize gay marriage and institute a variety of legal equalities. Gay Rights have been slower to gain respect in the rest of Mexico, though its Supreme Court stands ready to protect the rights of LGBT+ individuals in states that have dragged their feet on adopting federal law equalizing marriage.

The world on a billionaire’s budget