Coronavirus got you down? No worries. A bit of oregano oil will protect you from this virus that was definitely created in a Chinese laboratory. We can attribute that information to Gabriel Cousens, a homeopathic doctor who used to run an East Village storefront selling gall bladder cleanses that required drinking a ton of olive oil. On his Facebook page, you’ll also find plenty of information about the dangers of 5G and the fact that vaccinated children often get the diseases they’re supposedly protected against while unvaccinated children remain healthy and free.

There are also ads for his Shaktipat workshops, a practice that usually requires that the guru touch the devotee in order to transfer psychic energy. But hey, a man has to make a living. It turns out Zoom has a feature that transmits sacred energy!

Social media leaves a trail of breadcrumbs that guides you down a trail of conspiracies. “The End Of The Vaccine Era Is Today!” claims one holistic vegan, who also states that the “Microsoft Couple” and “Facebook guy” are not that smart—posted on Facebook. Forget vaccines, a steady diet of enzymes, water fasting, higher consciousness, and rebounding (pretty sure that’s not basketball) is guaranteed to cure you of this “scamdemic.”

I’ve hung out on the edge of the “wellness community” for over 20 years. My undergraduate studies focused on Eastern religions. I started practicing yoga in 1998 and began teaching in 2004. Having been active on social media platforms for decades, I’ve communicated with a range of people in the so-called wellness space. While I’ve long been wary of many ideas circulated within this group, COVID-19 has inspired a pandemic of conspiracy I could not have foreseen.

In 2011, Charlotte Ward coined the term “conspirituality,” which she defines as “a rapidly growing web movement expressing an ideology fuelled by political disillusionment and the popularity of alternative worldviews.” In the article, published in Journal of Contemporary Religion, Ward names three first-generation charlatans that represent this toxic fusion of New Age ideology and right-wing conspiracies. One is former soccer player, David Icke, of whom she writes,

“He is notorious for alleging that a shadow government harbours the bloodlines of an ancient race of reptilian extraterrestrials.”

Icke regurgitated this factoid on an episode of “London Real,” which has garnered nearly 6 million views on YouTube. He begins by claiming the world is controlled by a cult, followed by an impassioned rage against 5G towers. Nanotechnology microchips are destined to be inserted into COVID-19 vaccines. We need to recognize these truths in order to be part of a “spiritual awakening,” which not-so-ironically is a dogwhistle used by wannabe cult leaders. Full circle, I suppose.

If trying to follow these plot lines confuses you, don’t worry: that’s part of the rhetoric. Ward continues,

“Conspirituality has spread from being a scattering of single, first-generation providers to a large chain. It is now part of the spiritual supermarket: clients shop around, settling upon the outlets whose interpretations of the two core convictions best suit their own opinions and tastes.”

Which is how in recent weeks my Facebook feed has become dominated by a warning that Bill Gates wants to depopulate the world in order to microchip humans by forcibly injecting COVID-19 vaccines into everyone. This saves lives in an attempt to control the population he initially set out to destroy. 5G is in there somewhere because, I don’t know, analytics?

A lack of critical thinking has long plagued the wellness community. An example: Since herbs and tinctures can be sold as dietary supplements with minimal federal oversight, companies go to great lengths to advertise their products regardless of clinical evidence. This has resulted in a multi-billion dollar alternative medicine market. If you want to achieve success in this market, you need to be alternative to something. That something happens to be vaccines, and Big Pharma in general.

Not that Big Pharma isn’t an appropriate enemy. The for-profit medical model is not designed to serve our interests. A real conspiracy is the relationship between pharmaceutical companies and doctors fostered by lackluster federal oversight. We should be up in arms about a mental health crisis that has in large part been created for profit maximization. But that story is complex and our brains are not designed to process complexity. An easier target is vaccines, one of the most effective and important scientific advances in history. 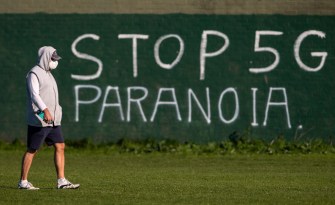 A man in a face mask walks in front of graffiti reading ‘Stop 5G Paranoia’ which is painted on a wall in East London on April 19, 2020 in London, England.

If you were to tell me a year ago that a pandemic would be cause for political polarization, I would have dismissed the notion, even in the era of Trump. My hope blinded me from the reality of the situation: confusion is the point. It keeps us off our guard.

In an essay on conspirituality in the COVID-19 age, philosopher Jules Evans writes that even the term “conspiracy theory” is confusing now. “It can be a way of simply dismissing a topic without considering it.” He continues,

“The pandemic has led to a breakdown in knowledge and certainty. We don’t know much about the virus or the best way of dealing with it, but we know it’s killing a lot of us and we’re afraid. This is happening to the entire human race at the same time, and we’re all connected on the internet.”

In 2012, I started a now-defunct blog with four fellow yoga teachers that tackled issues in yoga and politics. While yoga has always been deeply political, the modern incarnation, which began in America in the early nineteenth century and became a marketing juggernaut in the eighties, usually eschews political talk. Yet the entire physical revolution of yoga in the early twentieth century was a response to British occupation. The only era of non-political yoga is modern, affluent America.

On our site, we strove to remind people that being a yogi means engaging as a citizen. At the most basic level, citizenry in a democracy requires that you vote. Our blog achieved some success and started a few conversations, yet we recognized that companies selling leggings will always reach a much larger audience. Humans are not built to care about things that don’t directly affect them. This is especially troubling in a yoga community in which one of the most popular mantras champions the freedom of all sentient beings. How that usually translates: “I want to feel good right now,” not “I’m willing to fight for livable wages so that everyone can afford their rent.”

Then a pandemic rolls around and suddenly everyone is affected. Since much of this wellness community has been checked out of politics, the first thing these healers and rebels encounter are rehashed right-wing talking points couched in the language of spirituality. This is not how conspirituality starts—that’s usually by men with agendas they want to monetize—but it is how it spreads. Ideas are as contagious as viruses and, as it turns out, equally dangerous.

Terrified of blushing? You might have erythrophobia.
Up Next
Neuropsych

Professional musicians are not right-brained

A study finds that while musical newbies exercise the brain’s so-called creative hemisphere, pros have moved on.