If only we had a warning.

Well, besides this 2007 review from a team at the University of Hong Kong warning about a pandemic coming from a wet market in southern China. Or President Obama warning about the potential for a pandemic in 2014. Or journalist Laurie Garrett, who has been covering diseases since reporting from Africa in the late 1970s, where she noticed that measles killed way more citizens than war. Her 1994 book was aptly titled “The Coming Plague.”

Garrett is what Richard Clarke and R.P. Eddy call a “Cassandra” in their 2017 book, “Warnings.” The term honors the Greek priestess who was cursed to utter prophecies that no one would believe. A Cassandra, they write, has “the ability to detect danger from warning signs before others see it.” Their book covers seven warnings we should have seen—Hurricane Katrina, Bernie Madoff, Fukushima, ISIS—and seven that are coming.

True story: a few weeks ago, I finish reading Sam Quinones’s exceptional reporting on the opioid epidemic, “Dreamland.” The next book on my desk is “Warnings,” which I planned on re-reading in order to cover the chapter on pandemics. I open Twitter to find a private message from R.P. Eddy randomly sharing their chapter on pandemics. Either my laptop is listening a little too closely or it’s a fortunate coincidence. I choose the latter and request an interview with Eddy, which he graciously accepts.

If anyone knows how governments respond (or don’t respond) to crises, it’s Eddy. The CEO of global intelligence firm, Ergo, Eddy previously served as Chief of Staff to Richard Holbrooke, Senior Adviser to Secretary of Energy Bill Richardson, and Senior Policy Officer to UN Secretary-General Kofi Annan. He was an architect of the Global Fund to Prevent AIDS, TB, and Malaria. He’s lived, breathed, and studied pandemics for decades. He is the man that, if we had a functional government, would be helping lead us through this mess right now.

When I mention COVID-19, his first reply is not reassuring: “We’re at the most foreseeable catastrophe I can think of.”

Being a Cassandra isn’t about assurance, but taking a broad look at the facts—he champions orthogonal thinking in “Warnings”—and piecing together a story. Eddy says it begins by noticing the “invisible obvious.”

He mentions a 1970s-era conference designed to address the role of women on Wall St. The highly-touted gathering took months of planning. Hundreds of people were in attendance. It wasn’t until everyone was on stage that someone noticed not a single woman was invited to speak. Once pointed out, no one could unsee it.

In every “warning” chapter—the rise of AI, the challenge of sea-level rise, the dangers of gene editing—a Cassandra is detailed. Garrett fulfills that role for pandemics. She claims public health experts are placed in an impossible situation. “You never get credit for correctly predicting an outbreak.” When they implement effective countermeasures that stop the spread of a virus, critics believe “that you exaggerated the threat.”

Eddy is talking to me from Idaho, where his family is sheltering. He noticed something odd while driving across America. On the east coast, everyone was vigilant about distancing and masks. As the Eddys encroached upon the heartland, even they started loosening up the rules. No human is distinct from their environment. Eddy speaks about the pandemic daily—Ergo is behind the highly-regarded COVID-19 Intelligence Forum—yet even he was being lulled into a false sense of security while stopping in communities that believe the coronavirus is a hoax, or at least not as dangerous as it is.

I ask why we’re so prone to disbelieve the science behind public health efforts.

“Humans have 130,000-year-old computers stuck between our ears. We are designed for a world much less complex than the one in which we find ourselves, and we are driven by biases and heuristics. We make mistakes all the time because we use these shortcuts that worked really well 100,000 years ago, but don’t work well now.” 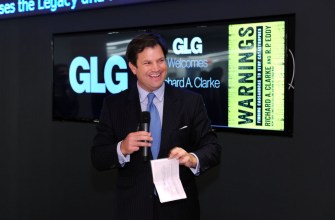 Eddy attends an event hosted by GLG to welcome Richard A. Clarke and R.P. Eddy, authors of “Warnings: Finding Cassandras To Stop Catastrophes” at GLG (Gerson Lehrman Group) on May 30, 2017 in New York City.Photo by Craig Barritt/Getty Images for GLG

I mention conspiracy theories. Eddy sighs—an appropriate response. We compare anti-maskers to anti-vaxxers, which are often cut from the same cloth. We both know plenty. He says it’s best to first identify and acknowledge the base fear behind their “anti.” Consider the idea that vaccines are a mechanism for microchipping the population.

“Conspiracies are all based in some healthy place. These people are probably concerned about government surveillance and personal freedom. They believe every aspect of the Edward Snowden story; they believe this microchipping story is the next step. They’re not wrong that we should watch and be aware, but they’re wrong in thinking that we’re falling for it right now.”

Because we should be aware. Our government is corrupt to the bone. The challenge is distinguishing between incompetence and malfeasance.

“I don’t believe in government conspiracy theories because I don’t think government is that competent. I’ve had every security clearance anyone could ever want in the U.S. government. Way above top secret. We do not have the capacity to pull off a 9/11 conspiracy or to microchip people. Everything leaks, especially in this era.”

We’ve reached this strange era of mass hypnosis, where elected officials like Rand Paul can actually state during congressional testimony, “We shouldn’t presume that a group of experts somehow knows what’s best.” Then who to actually trust? An uncertified ophthalmologist playing an epidemiologist on TV?

We’re in serious trouble when people that have spent years studying and decades working in public health are usurped by charlatans at YouTube University. But here we are.

“You need to recognize when you’re out of your depths and find an expert. It’s not the blowhard on Fox News. It’s probably, by the way, someone who probably does not have good presentation skills. But they likely have answers.”

This is always true, especially during times of crisis. Times like now, when we need a unifying message and expert guidance, both of which America lacks. At least this much we know: we’ve been warned.

▸
5 min
—
with
Michael Dowling
The Past

With the most common form of female sexual dysfunction impacting 1 in 10 women, this important study dives into how to keep a relationship going despite having different needs and wants in the bedroom.