In the fourth and fifth centuries, Christians were called upon to practice alousia. Known as “the state of being unwashed,” the only time these faithful were allowed to bathe was during baptism. Any other instance of putting soap and water together for the sake of cleansing one’s skin, according to “The Dirt on Clean” by Katherine Ashenburg, “signified vanity and worldliness.”

Humans have always had strange bathing rituals (or lack thereof). As one instance of the bubonic plague claimed 25 million European lives in the 14th century, the University of Paris’s medical faculty discovered the cause: the conjunction of Saturn, Jupiter, and Mars “caused disease-infected vapors to rise out of the earth and waters and poison the air.” The most susceptible? Anyone taking hot baths, which opened the pores and allowed the vapors to penetrate.

There was a two-century stretch in which Europeans refused to bathe. Muslims and Jews, both with their own extensive histories of cleansing rituals, long suspected their Christian neighbors of being filthy. Not that early Christians left their peers off easily. They believed these silly rituals with soap and oils and water were the actual source of scourge. Dirtiness was divine. So long as their linen shirts were cleaned and pressed, whatever went on beneath was as nature intended.

Nature doesn’t intend so much as adjusts. Bacteria and viruses couldn’t care less about rituals. Their goal is to proliferate, not pontificate. While today we’ve course-corrected too far thanks to an obsession with antibacterial soap, good hygiene has always been wrapped up with mysticism and ritual—as well as racism.

David Patrikarakos points out that the bubonic plague provided an opportunity to scapegoat Jewish communities, which have long been subject to unfair scrutiny. “Hundreds of Jewish communities perished too,” he writes, “their inhabitants slaughtered out of hatred and fear.” The Black Death was yet another in a series of instances that “rebirthed an ancient idea: that the Jews are to blame.”

Strange ideas about cleanliness persist. For instance, in early twentieth-century France, dirt was thought to nourish your hair. The anti-aging protocol du jour involved keeping your skin as oily as possible. Our neuroses about health always seem to get the best of us. A recent Pew study discovered that roughly 30 percent of Americans believe that COVID-19 was created in a laboratory. Again, a profound misunderstanding of nature—in this case, our relationship with other animals.

As Patrikarakos notes, Turkish state-run television recently promoted the idea that Jews and Zionists engineered the novel coronavirus to “neuter the world’s population.” An Algerian news outlet jumped on the same bandwagon. Never to be outdone, some American pastors and Reddit commentators (always the crème of our nation, them) believe the pandemic is God’s way of exterminating Jews. By this point, you’d think the Big Guy would have been able to handle that directive.

Let’s not leave out the Chinese, who have taken the brunt of this current aggression. The “Chinese virus” rhetoric coming from the White House has real-world consequences for Chinese-Americans (and relationships with China broadly). That doesn’t mean, as Bill Maher suggested last week, we cannot use the geographical location in naming the virus. He lists plenty of examples:

“Zika is from the Zika Forest, Ebola from the Ebola River, hantavirus the Hantan River. There’s the West Nile virus and Guinea worm and Rocky Mountain spotted fever and, of course, the Spanish flu.” 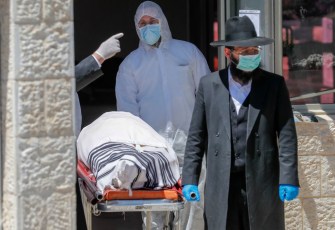 An Israeli rabbi walks next to the body former Sephardic chief rabbi of Israel Eliahu Bakshi-Doron, who died from complications of the coronavirus (COVID-19) infection the previous last night, during his funeral at the har HaMenuchot cemetery in Jerusalem on April 13, 2020.

Maher’s larger point is relevant and unfortunately absent in many discussions regarding this pandemic. It’s possible to both recognize that this virus appears to have originated in an exotic animal market—a danger that we’ve been warned about since at least 2007 specific to Chinese markets (by researchers in Hong Kong, no less)—and not be racist and xenophobic. We can work toward banning food stalls that threaten public health without abandoning Chinese restaurants in America. Yet it doesn’t appear that we’re able to hold two ideas in our heads anymore.

While I don’t have extensive experience debating on a stage, I recall an essential part of the training: you have to argue whatever point you’re assigned. This sometimes means arguing for a perspective you’re personally against. The best debaters learn this skill. The rest spend their time trolling on social media.

Debate prep arms you with critical thinking skills necessary for navigating a confusing and at times contradictory world. It forces you to stop reacting emotionally after reading the lede of an article without bothering to click through. We have reached, as Patrikarakos writes regarding the invented DC pizzeria pedophile ring, “the perfect embrace of the sinister and the absurd.”

Thus, next to posts about 5G killing birds (false) and causing coronavirus (false) and Bill Gates being sued by India (false) and vaccines causing autism (false), the ultimate conspiracy must be between the Chinese government and Zionists tanking the global economy in order to…to…

Writing about smallpox in 19th-century Britain, Ashenburg writes that the unintended transmission of disease (in this case through the eyes of Charles Dickens’s 1853 novel, “Bleak House”), “is a forceful reminder that the neglect of its weakest members makes society as a whole vulnerable.” Along the way, we finally recognized that soap and water is necessary for public health. Now if only we can find the magic formula that ends our toxic love affair for racist and xenophobic conspiracy theories, during times of pandemics and otherwise.

Fighting boredom with banjos and Russian grammar: Tips from polar explorers for surviving months of isolation

How did the Antarctic explorers survive tedium in the early 1900s?