The coffee beans that keep us going don’t grow on the vine in bean form. They grow as coffee “cherries,” skin and pulp inside of which resides the precious beans. Before coffee beans can be fermented in water as many are, the cherries pass through a machine that extracts the bean from the skin and pulp. Miraculous as coffee beans are, new research suggests that their typically discarded pulp is even more amazing. It can restore tropical forests.

Researchers from ETH-Zurich and the University of Hawaii have found that this waste from coffee manufacturing is a fantastic growing agent after testing it out on some agriculturally depleted land in Costa Rica.

“The results were dramatic,” reports lead author of the study Rebecca Cole. “The area treated with a thick layer of coffee pulp turned into a small forest in only two years while the control plot remained dominated by non-native pasture grasses.” 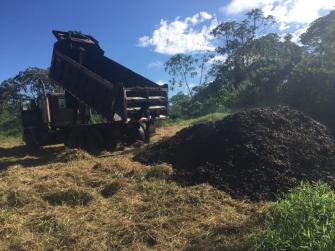 The researchers delivered 30 dump trucks full of coffee pulp to a 35- by 40-meter parcel on Reserva Biológica Sabalito in Costa Rica’s Coto Brus county. The land, previously part of a coffee plantation, is in the process of being reforested.

Starting in the 1950s, Costa Rica experienced rapid deforestation followed by coffee-growing and farming that resulted in a 25% loss of its natural forest cover by 2014.

Before spreading out the coffee pulp into a half-meter-thick layer for their test, the researchers measured the nutrients in the soil. They also catalogued the species living nearby, and made note of the size of woody stems present. The amount of forest ground cover was recorded, and drones were sent aloft to capture the amount of canopy cover.

Reforestation in the blink of an eye 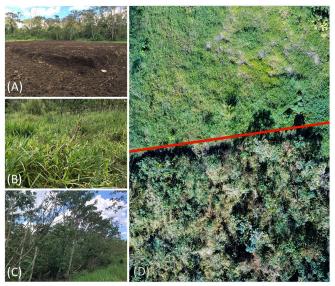 At the end of the two years, the control area had grown forest covering over 20% of its area. In contrast, 80% of the coffee-pulp section was canopied by trees, and these trees were four times the height of those in the control parcel.

The researchers analyzed the nutrients available in the soil and found significantly elevated levels of carbon, nitrogen, and phosphorous, all vital agricultural nutrients. Curiously, potassium, also important for growth, was lower in the coffee-pulp area than in the control section.

The researchers also found that the coffee pulp eliminated invasive pasture grasses that inhibit reforestation. Their removal facilitated the reemergence of tree species whose seeds were introduced by wind or animal dispersal.

According to Cole, “This case study suggests that agricultural by-products can be used to speed up forest recovery on degraded tropical lands. In situations where processing these by-products incurs a cost to agricultural industries, using them for restoration to meet global reforestation objectives can represent a ‘win-win’ scenario.”

Promising as coffee pulp may be, Cole cautions: “This study was done at only one large site, so more testing is needed to see if this strategy works across a broader range of conditions. The measurements we share are only from the first two years. Longer-term monitoring would show how the coffee pulp affected soil and vegetation over time. Additional testing can also assess whether there are any undesirable effects from the coffee pulp application.”

In addition, she notes, the experiment only documents the value of coffee pulp on flat land when delivery of the substance by truck is fairly simple. “We would like,” Cole says, “to scale up the study by testing this method across a variety of degraded sites in the landscape.”

Just as exciting is the possibility that other such agricultural waste products may be good for reforesting depleted areas. Cole mentions orange husks as a material worthy of investigation.

“We hope,” Cole concludes, “our study is a jumping off point for other researchers and industries to take a look at how they might make their production more efficient by creating links to the global restoration movement.”

Made from concrete, it cost 15% less per square foot to construct than a typical house.
Life

France is split in two by its very own “desert,” the Empty Diagonal. The area’s depopulation is fairly recent, and Paris is to blame.
Up Next
Hard Science

New studies find the interstellar comet 2I/Borisov is the most “pristine” ever discovered.