One of the only interstellar visitors ever discovered traversing our Solar System, the rogue comet 2l/Borisov, is also one of the most “pristine” such space objects ever. The comet, which was first spotted in 2019 by the amateur Ukrainian astronomer Gennady Borisov, likely never flew too close to any star including our sun, which left its composition very similar to how it was upon formation.

Comets, which are space bodies made of frozen gas, rock, and ice, are usually impacted by the heat and radiation they encounter on their way. What’s attractive to scientists in studying comets that haven’t changed much in their lifetimes is that they have a similar composition to the gas and dust that was present at the formation of the Solar System 4.5 billion years ago. Analyzing pristine comets can lead to a deeper understanding of the Solar System’s beginnings and evolution.

The 2I/Borisov comet is only the second interstellar object ever found in our Solar System. The first one was 1I/’Oumuamua, detected in 2017.

The new study, based on observations from the European Southern Observatory’s Very Large Telescope (ESO’s VLT) in Chile, was led by Stefano Bagnulo of the Armagh Observatory and Planetarium in Northern Ireland. 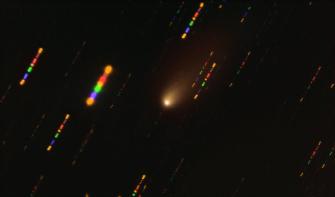 As reported in Nature Communications, his team used a technique called polarimetry, which measures the polarization of light, to study the space body. This helped the team compare 2I/Borisov to other local comets. The properties of the new comet were quite different from others they found in the Solar System, except for Hale-Bopp, a comet discovered in 1995 which is also considered very pristine.

The study’s co-author Alberto Cellino from the Astrophysical Observatory of Torino, Italy, commented upon this connection, arrived at by analyzing polarization along with the comet’s color:

In a fascinating nod to just how powerful Earth’s top telescopes have become, another set of ESO researchers published a different study in Nature Astronomy on the comet’s composition using data from the Atacama Large Millimeter/submillimeter Array (ALMA). This team, led by astronomer Bin Yang, was able to gather many clues about 2I/Borisov’s makeup from its coma – the envelope of dust surrounding it. Inside the coma, they discovered compact pebbles, grains around one millimeter in size. They could also tell that the relative amounts of carbon monoxide and water in the comet changed significantly as it came closer to the Sun.

This indicated to them that the materials in the comet came from different places in the cosmos. Matter in the comet’s home star system was likely mixed in a discernible pattern that related to how far the comet was from its star, found the scientists. This was possibly affected by the presence of giant planets, which stirred up materials in their system through strong gravity. Astronomers think this kind of process also took place in the early period of the Solar System’s life.

“Imagine how lucky we were that a comet from a system light-years away simply took a trip to our doorstep by chance,” remarked Yang.

In 2029, the European Space Agency plans to launch the Comet Interceptor project that would allow scientists to study comets that speed through our Solar System with even greater precision.

Humans won’t survive if we stay on Earth. Michio Kaku explains.
▸
7 min
—
with
Michio Kaku
Starts With A Bang

Ask Ethan: Is the Universe rotating?

At all distances, the Universe expands along our line-of-sight. But we can’t measure side-to-side motions; could it be rotating as well?
13.8

Modern cosmology conjectures different possible fates for the Universe and thus for the end of time. Details depend on which model is right.
13.8

SETI is no longer just a guessing game.
Up Next
Starts With A Bang

Why Is It So Hard To Rule Out Future Asteroid And Comet Strikes On Earth?

If a large asteroid strikes Earth, it has the potential to release an enormous amount of energy, leading to local or even global catastrophes. At ~450 meters long along its […]