In 2016, the Paris Climate Agreement set out the ambitious goal of limiting the rise in global temperature to below 2°C above its preindustrial levels, preferably to 1.5°C. These numbers might seem small, but the amount of energy needed to transform the entire world’s average temperature is tremendous, and so too are its effects. If, for instance, the global temperature blasts past that 2°C mark and reaches 4°C, then nearly all of the U.S. will turn into an uninhabitable desert.

But focusing too much on the doom-and-gloom that climate change discussions so often revolve around can be pretty exhausting. So, let’s focus instead on possible solutions. If we’re to stay below 2°C, we’ll need to deploy a multifaceted strategy. Part of that has to be finding ways to remove the greenhouse gases already in our atmosphere.

Recently, researchers at the International Institute for Applied Systems Science looked at the top six land-based methods for sucking greenhouse gases out of the atmosphere to evaluate their costs, their benefits, and which might be our best options going forward. While some of them are more risky or higher cost than others, all of them were found to contribute in some way and to effectively remove greenhouse gases from out of atmosphere.

Between 1990 and 2015, the world lost 290 million hectares of forest. Restoring these depleted reserves (reforestation) and planting in previously un-forested areas (afforestation) is a fairly simple, common-sense approach to fighting climate change. Trees suck CO2 out of the air and store it in their timber — not only that, but they also contribute to food production, help to regulate freshwater, offer habitats to animals, and provide jobs and recreation among other benefits.

On the other hand, afforestation and reforestation require a lot of water usage and take up land that could otherwise be used for farming. Despite this, the researchers estimated that this strategy could remove between 0.5 to 7 gigatons (that’s a billion tons) of CO2 from the atmosphere. To put that into context, one estimate provided by Carbon Brief suggests that human beings have released 1,374 gigatons of CO2 into the atmosphere since the Industrial Revolution. We don’t have to get rid of all of this extra CO2, fortunately; just enough to keep warming within acceptable bounds. 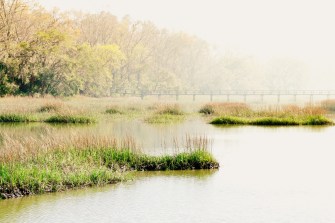 Photo by Eric Muhr on Unsplash

Wetlands might seem like an odd candidate for being one of the most beneficial features of the planet, but they have the potential to scrub another 2.7 gigatons of CO2 from the air. In fact, although wetlands cover 9 percent of the planet, they’re estimated to deliver 23 percent of the total value offered by the globe’s ecosystems.

For instance, wetlands are the best regulators of water resources out there—they’re even sometimes intentionally developed near sewage plants to help filter out pollutants. They also provide habitats for keystone species, can help to produce certain crops (e.g., rice or cranberries), and are extremely resilient to rising sea levels.

Although they tend to release some methane, the amount of CO2 they suck up is well worth it. Regrettably, however, half of the globe’s wetlands have been lost, making their restoration a top priority. In addition to being a cheap venture, the researchers also identified virtually no downsides to restoring wetlands.

Like wetland restoration, soil carbon sequestration — storing carbon in the soil over the long term — presents few downsides. This can take place through a variety of mechanisms, the biggest one being the photosynthesis of plants. But smart crop management, like rotating crops, planting perennial crops (those that don’t need to be replanted every year), and so on, can increase how much carbon is stored in the soil. So too can optimizing fertilizer usage, tilling less intensely, improving water management, and many other techniques. Implementing these techniques could result in a reduction of between 2 and 5 gigatons of CO2.

By farming with the conscious goal of sequestering more carbon in the soil, we also gain the benefit of having more useful soil for use in building materials, pharmaceuticals, electronics, and other industrial applications. Plus, it helps to prevent erosion, preserves the landscape, and increases crop yields. 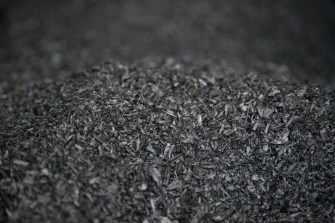 Biochar is the result of biomass pyrolysis; simply put, it’s charcoal. When biomass is burned in a low- or no-oxygen environment, it becomes carbonized, locking that carbon into the material and preventing its transference to the atmosphere. Biochar stores carbon in a long-term, durable fashion. Typically, biochar is distributed in soil, where it can help improve food production and balance the pH of acidic soil. Microorganisms in soils also emit nitrous oxide, another greenhouse gas, but adding small amounts of biochar significantly reduces these emissions, along with other greenhouse gases other than CO2. Plus, producing biochar can also generate electricity.

However, biochar production has to be done carefully. If produced without following clean guidelines, biochar can actually release more greenhouse gases into the atmosphere. But if done correctly, producing biochar could reduce greenhouse gases by up to 2 gigatons of CO2 a year.

A considerable amount of chemistry is slowly but consistently being conducted beneath our feet. In particular, weathering plays an important role in soil chemistry. As the soil’s minerals break down over time, they release nutrients and form secondary minerals, like clay. We can improve this process and encourage desirable soil chemistry by adding crushed silicate rocks rich in calcium and magnesium and low in metal ions like nickel or chromium. Basalt, for instance, would be a good candidate.

Doing so could reduce soil acidity and encourage the transformation of CO2 into bicarbonate ions, or HCO3–. As an added benefit, run-off HCO3– could increase ocean alkalinity, making the ocean more resistant to pH changes. Although it would have some positive effect, the researchers noted that field-scale assessments of this technique’s interactions with other approaches — like reforestation — would be necessary to determine exactly how much terrestrial enhanced weathering could contribute to reducing greenhouse gas emissions. 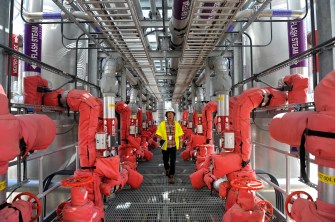 An engineer walks through the Bailey Bioenergy Facility in Washington, D.C.

The use of BECCS is something of a one-two punch; it provides energy, avoiding the need to use fossil fuels, and as feedstocks grow for later use as fuel, they suck CO2 out of the atmosphere. Plants like switchgrass or giant reedgrass make for excellent BECCS feedstocks.

Generally, regular bioenergy is a carbon-zero product, since the fuel sequesters CO2 as it grows and releases CO2 as it’s burned for energy. But incorporating carbon capture and storage (CCS) technology in this process results in negative emissions. This beats adding CCS technology to fossil fuel processes, since burning fossil fuels starts off by adding emissions to the atmosphere — existing CCS tech can therefore only reduce fossil fuel emissions, rather than turning them negative as is the case with bioenergy.

If BECCS were implemented at a large scale by the year 2100, it could remove 15 gigatons of CO2 per year. However, doing so would be expensive, and the land taken up to grow bioenergy feedstocks could be used instead to grow food. It would also require a greater use of fertilizers and would require a good amount of water to grow.

​With the exception of wetland restoration and soil carbon sequestration, all of these approaches for greenhouse gas removal present some kind of downside that we would need to mitigate. The most challenging approaches would be afforestation/reforestation, BECCS, and biochar production, primarily due to their use of land that could otherwise grow food and their water requirements.

However, the researchers found that all of these methods for greenhouse gas removal would not only reduce greenhouse gases in the atmosphere, but, on balance, they would also make our lives better, either by creating jobs, reducing pollution, contributing food, promoting ecological diversity, or other ancillary benefits. Combating climate change is often presented as a costly venture, but in reality, it’s more of an investment. By assessing the costs and benefits of approaches such as these six, we can get a better picture of what our return will be.

Short-hop regional flights could be running on batteries in a few years.
Hard Science

The war in Ukraine is unlikely to trigger a catastrophic nuclear meltdown. Physics and smart engineering are the reasons why.
Up Next
Starts With A Bang

The 3 Most Important Questions Every Prospective Grad Student Must Face

Graduate school, ideally, is about getting to learn about and work hard at something you love in an intellectual pursuit unlike any other. Here, a group of graduate students await […]