Human beings are great at responding to imminent and visible threats. Climate change, while dire, is almost entirely the opposite: it’s slow, it’s pervasive, it’s vague, and it’s invisible. Researchers and policymakers have been trying to package climate change in a way that conveys its severity. Usually, they do so by talking about its immediate effects: rising temperature, rising sea levels, and increasingly dangerous weather.

These things are bad, make no mistake about it. But the thing that makes climate change truly dire isn’t that Cape Cod will be underwater next century, that polar bears will go extinct, or that we’ll have to invent new categories for future hurricanes. It’s the thousands of ancillary effects — the indirect pressure that climate change puts on every person on the planet.

Nigel Farage in front of a billboard that leverages the immigration crisis to support Brexit.

Because climate change is too big for the mind to grasp, we’ll have to use a case study to talk about this. The Syrian civil war is a horrific tangle of senseless violence, but there are some primary causes we can point to. There is the longstanding conflicts between different religious sects in that country. Additionally, the Arab Spring swept Syria up in a wave of resistance against authoritarian leaders in the Middle East — unfortunately, Syrian protests were brutally squashed by Bashar Al-Assad. These, and many other factors, contributed to the start of the Syrian civil war.

One of these other factors was drought. In fact, the drought in that region — it started in 2006 — has been described as the “worst long-term drought and most severe set of crop failures since agricultural civilization began in the Fertile Crescent many millennia ago.” Because of this drought, many rural Syrians could no longer support themselves. Between 2006 and 2009, an estimated 1.5 million Syrians — many of them agricultural workers and farmers — moved into the country’s major cities. With this sudden mixing of different social groups in a country where classes and religious sects were already at odds with one another, tensions rose, and the increased economic instability encouraged chaos. Again, the drought didn’t cause the civil war — but it sure as hell helped it along.

The ensuing flood of refugees to Europe is already a well-known story. The immigration crisis was used as a talking point in the Brexit movement to encourage Britain to leave the EU. Authoritarian or extreme-right governments and political parties have sprung up in France, Italy, Greece, Hungary, Slovenia, and other European countries, all of which have capitalized on fears of the immigration crisis.

Why climate change is a “threat multiplier”

This is why both NATO and the Pentagon have labeled climate change as a “threat multiplier.” On its own, climate change doesn’t cause these issues — rather, it exacerbates underlying problems in societies around the world. Think of having a heated discussion inside a slowly heating-up car.

Climate change is often discussed in terms of its domino effect: for example, higher temperatures around the world melt the icecaps, releasing methane stored in the polar ice that contributes to the rise in temperature, which both reduces available land for agriculture due to drought and makes parts of the ocean uninhabitable for different animal species, wreaking havoc on the food chain, and ultimately making food more scarce.

Maybe we should start to consider climate change’s domino effect in more human and political terms. That is, in terms of the dominoes of sociopolitical events spurred on by climate change and the missing resources it gobbles up. 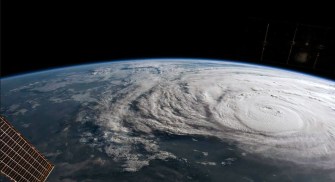 What the future may hold

Part of why this is difficult to see is because climate change does not affect all countries proportionally — at least, not in a direct sense. Germanwatch, a German NGO, releases a climate change index every year to analyze exactly how badly different countries have been affected by climate change. The top five most at-risk countries are Haiti, Zimbabwe, Fiji, Sri Lanka, and Vietnam. Notice that many of these places are islands, which are at the greatest risk for major storms and rising sea levels. Some island nations are even expected to literally disappear — the leaders of these nations are actively making plans to move their citizens to other countries.

But Germanwatch’s climate change index is based on weather events. It does not account for the political and social instability that will likely result. The U.S. and many parts of Europe are relatively low on the index, but that is precisely why these countries will most likely need to deal with the human cost of climate change. Refugees won’t go from the frying pan into the fire: they’ll go to the closest, safest place available.

Many people’s instinctive response to floods of immigrants is to simply make borders more restrictive. This makes sense — a nation’s first duty is to its own citizens, after all. Unfortunately, people who support stronger immigration policies tend to have right-wing authoritarian tendencies. This isn’t always the case, of course, but anecdotally, we can look at the governments in Europe that have stricter immigration policies. Hungary, for example, has extremely strict policies against Muslim immigrants. It’s also rapidly turning into a dictatorship. The country has cracked down on media organizations and NGOs, eroded its judicial system’s independence, illegalized homelessness, and banned gender studies courses.

Climate change and its sociopolitical effects, such as refugee migration, aren’t some poorer country’s problem. They’re everyone’s problem. Whether it’s our food, our homes, or our rights, climate change will exact a toll on every nation on Earth. Stopping climate change, or at least reducing its impact, is vitally important. Equally important is contending with the multifaceted threats its going to throw our way.

For decades, researchers have proposed that climate change and human-caused environmental destruction led to demographic collapse on Easter Island. That's probably false, according to new research.

The guilt-free air conditioning, called "cooling paper," is made from recyclable paper and doesn't use any electricity.

A new study mapped areas of the U.S. that are most likely to suffer natural disasters.

These 10 books will make you a better designer

You can learn good design through these books. Most of which is avoiding bad design.