A new computer model suggests that the 21st century will have more frequent hurricanes of staggering force. 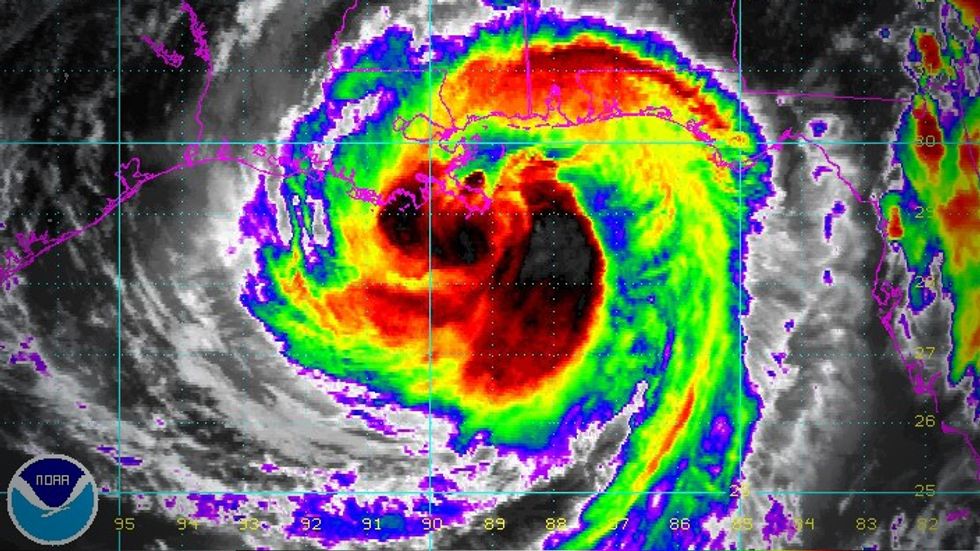 A new computer model predicts that storms in the 21st century will become increasingly violent (National Oceanic and Atmospheric Administration).

The 21st century is not only projected to see more hurricanes, but also ones so extreme that scientists might need to create a new category to classify them.

A new computer model, created at the National Oceanic and Atmospheric Administration's (NOAA's) Geophysical Fluid Dynamics Laboratory, can provide unprecedentedly detailed forecasts of tropical storms in both past and future environments by simulating interactions between meteorological forces, like the atmosphere and oceans.

Recently, a team led by NOAA researcher Kieran Bhatia used the technology to glimpse the future and see how a warming climate might affect tropical storms across the globe. The sight was unsettling.

Alarmingly, the intensity of some storms is projected to be off the charts.

The Saffir-Simpson scale (pictured above) is used to categorize the intensity of storms and currently tops out at 5 (NOAA).

Scientists currently use the Saffir-Simpson scale to measure the intensity of tropical storms and tropical depressions (essentially, a mini-storm). A storm registers on the lowest end of the scale when its winds reach 74 miles per hour. The most severe category, 5, begins at 157 mph and is left open-ended.

The new projections forecast some storms with maximum sustained winds of more than 190 mph. Only 9 such storms were observed in the 20th century. But for 2016 to 2035, the projections produced 32 of these extreme storms and 72 for 2081 to 2100.

Some scientists argue that adding a new category to the Saffir-Simpson scale will help the public grasp the changes climate change is bringing to the planet.

“Scientifically, [six] would be a better description of the strength of 200-mph storms, and it would also better communicate the well-established finding now that climate change is making the strongest storms even stronger," said climatologist Michael Mann, director of the Earth System Science Center at Penn State University, at a conference earlier this year.

“Since the scale is now used as much in a scientific context as it is a damage assessment context, it makes sense to introduce a category six to describe the unprecedented strength 200-mph storms we've seen over the past few years both globally and here in the southern hemisphere."

One primary driver of the planet's increasingly extreme hurricanes is warming oceans.

Watch out, America! #HurricaneFlorence is so enormous, we could only capture her with a super wide-angle lens from the @Space_Station, 400 km directly above the eye. Get prepared on the East Coast, this is a no-kidding nightmare coming for you. #Horizons pic.twitter.com/ovZozsncfh
— Alexander Gerst (@Astro_Alex) September 12, 2018