Last May, a chunk of ice destined to become the world’s largest iceberg broke free of the western side of Antarctica’s Filchner-Ronne Ice Shelf. Bigger than Rhode Island, the 105-mile long, 15-mile wide, 1667-square-mile iceberg — now named A-76 — slid into the Weddell Sea. The loss of significant chunks of Antarctic ice is happening with alarming regularity as the planet warms.

Icebergs can be deep enough to scrape the sea floor. They also can be large enough to cause tsunamis as they splash into the sea, and the huge volumes of water they displace can threaten ships and damage marine structures such as platforms and undersea internet cabling.

Now, a new study reveals that smaller icebergs, chunks whose keel does not even touch bottom, can produce underwater landslides when they hit a shoreline and capsize, possibly resulting in a tsunami. This poses a previously under-appreciated geohazard.

The study notes, “Icebergs originating from the Arctic, Greenland and Antarctica are hazards thousands of kilometers away from their original source and can affect continental slopes by triggering submarine landslides.” 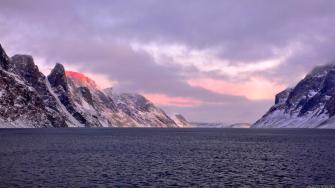 The worrying insight is the product of some detective work that revealed an underwater landslide in the Southwind Fjord off of Nunavut near Canada’s Baffin Island, some time between September 2018 and September 2019.

Marine landslides are notoriously hard to analyze since they typically occur out of sight. For the study, the researchers consulted satellite data, seafloor bathymetric data, and analyses of the local seabed’s composition to solve a geological whodunnit.

The telltale signs of the landslide were found in a comparison of high-resolution, multibeam echosounder data of the fjord’s seabed captured in 2013, 2014, 2018, and 2019. The earliest depicted a gently sloping, “featureless” seabed. By the later readings, however, two smaller scarps had appeared.

The story told is of a primary landslide some time between August 27, 2018 ( the date of the 2018 readings) and September 24, 2019 (the date of the next bathymetric survey). There were also signs of two adjacent landslides in the same time period, which occurred as the two smaller scarps failed. There were no reports of large earthquakes within 300 kilometers of the fjord during this period.

However, there was the geological equivalent of a smoking gun: the scientists observed 20-27-meter-deep iceberg pits, depressions indicative of an iceberg impact.

Imagery from the Sentinel 2 satellite revealed the perpetrator as it floated into the fjord around August 27, 2018, became grounded between September 1-4, and was no longer intact and visible by early October. The interloper’s location lined up perfectly with the seabed data — the iceberg grounded 3 meters upslope of the ice pits in the first few days of September 2018 and wound up 3 meters downslope from them by the 9th. The narrative suggested is that between September 4 and 9, the iceberg capsized, hit the seafloor, and broke into two pieces.

Not just a threat to unsinkable ships

The study exposes a new marine geohazard, as it was previously assumed that submarine landslides were caused only by earthquakes. It was also believed that iceberg damage was constrained to continental shelves and upper slopes as icebergs floated into water that is too shallow for their depth.

Now, however, the study concludes: “These results indicate that icebergs grounding and capsizing may be responsible for triggering submarine landslides in many fjords and on continental slopes in polar to sub-polar environments, representing a previously underestimated hazard.”

“The surface is no longer a record of every impact the moon has ever had, because at some point, impacts were erasing previous impacts.”
The Future

Is the Salton Sea hiding enough lithium to power America?

A team of scientists hopes deep-earth lithium could sustain America’s vast demand for batteries. But extracting it won’t be easy.
Hard Science

Scientists may finally know why the length of a day changes

The length of a day oscillates slightly every six years. This was a surprising discovery made last decade. We might now know why.
The Future

“I thought, why not direct these high-power beams, instead of into fusion plasma, down into rock and vaporize the hole?”
Hard Science

Controversy: Is there really a giant ozone hole over the tropics?

Some ozone experts seriously doubt the findings.
Up Next
Thinking

The power of utopian thinking: it’s not just for naïve dreamers

Utopia is like a John Lennon song but with golden toilets.