The political strife that defines today’s America derives its energy from the feeling among many that their voices are not being heard. By and large, Americans do not trust Congress and often vote to send a message, hoping to get their opinions represented. The reality is that the political parties do all they can to stay in power, with achieving fairness and democracy not their primary goals.

Gerrymandering is the practice of drawing the borders of voting districts to favor specific candidates or political parties. It can make a difference in the number of representatives of each party that a state sends to Washington. In essence, using these strategies can allow one party to keep winning the majority of districts (and representatives) without having the most votes.

Jonathan Mattingly, a mathematician from Duke University in North Carolina, has been working for the past several years to figure out mathematical solutions to the problem. He would like to take the job of drawing voting district lines away from self-serving politicians.

As part of that goal, Mattingly created an algorithm that produces random iterations of the state’s election maps to show the impact of gerrymandering. This is not just a hypothetical exercise. The mathematician says that partisan gerrymandering is having a serious effect on our democracy.

“Even if gerrymandering affected just 5 seats out of 435, that’s often enough to sway crucial votes,” he said in an interview with the journal Nature, referring to the number of representatives in Congress.

Two of the most used methods in gerrymandering are packing and cracking. When they employ packing, legislators try to draw the map in such a way that the opposing voters would be packed into the fewest districts possible. Cracking means dividing the other party’s voters into several districts, making it harder for them to elect a representative. This tactic helps the party in power to stay in power.

Here’s a useful graphic from Washington Post on how gerrymandering works: 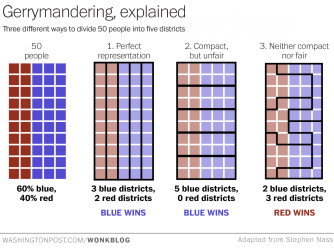 Mattingly’s state of North Carolina has been ground zero in this fight. While both parties used to receive a generally equal number of representatives (either six or seven), Republican redistricting several years ago packed most of the Democrats into three districts. The 2015-2016 North Carolina cohort to Washington included just 3 Democrats and 10 Republicans, while the statewide vote is split close to 50-50 between the two parties.

Recently, the Supreme Court weighed in that two districts in North Carolina were drawn along racial lines and were, as such, unconstitutional.

While the Supreme Court intervened in that case, the highest court in the land doesn’t generally address gerrymandering as long as districts abide by four criteria – the districts need to be compact, continuous, have more or less the same number of people and give minority groups a chance to elect their own rep. The difficulty of objectively proving whether and how the district is gerrymandered has been one of the difficulties in stopping this practice.

Mattingly set out to create mathematical tools that would prove to the courts time and time again if a district borders have been drawn by politics and not fairness. What Mattingly and his student Christy Graves realized is that gerrymandering produces certain statistical signs. The opposition party usually gets a landslide in the packed districts and loses narrowly in the cracked ones. Using data analysis, Mattingly and his team were able to create an index that shows the extent of gerrymandering in a district.

It is important to note that Mattingly is not alone in this quest. Other mathematicians have also been working to create better methods for evaluating gerrymandering. The political statistician Wendy Tam Cho from the University of Illinois Urbana-Champaign has also designed district map-drawing algorithms that satisfy state law requirements without relying on partisan voting information.

Nicholas Stephanopoulos, a political scientist from the University of Chicago, created an “efficiency gap” to show how each state’s wasted votes can reveal signs of gerrymandering. If a party has landslide victories or losses, with numbers much more extreme than the proportion it actually needed to win, that could be a sign of political shenanigans.

Despite the various science and math-based ideas to combat gerrymandering, they have not been embraced by the politicians. Perhaps, unsurprisingly, as they do not want to lose this weapon from their arsenal. But there are signs that the courts are admitting more mathematical analysis when gerrymandering is being alleged. Whitford v. Gill, a Wisconsin case, which may end up before the Supreme Court, used Stephanopoulos’s efficiency gap analysis to inform their decision.

The upcoming 2020 census is the next big event in this fight. The new numbers are likely to create much redistricting around the country. While Republicans have been shown to use gerrymandering to their advantage, the Democrats also engage in the practice. Mattingly’s analysis showed they used the tactic in Maryland, where they control the legislature. For the sake of American democracy, devising objective mathematical approaches that ensure all voices are being heard equally seems like a no-brainer.

You can read the paper by Mattingly and his team here.

Tags
democracygerrymanderingmathmathematicsNorth CarolinapoliticsSupreme CourtVoting
In this article
democracygerrymanderingmathmathematicsNorth CarolinapoliticsSupreme CourtVoting
Related
Starts With A Bang
This one-page calendar will change how you view the year
It’s simpler, more compact, and reusable from year-to-year in a way that no other calendar is. Here’s both how it works and how to use it.
The Present
Mathematics explains why non-conformists always end up looking alike
It’s called the “hipster effect,” and a study from Brandeis University mathematician Jonathan Touboul explains how it happens.
The Present
Top 10 most popular stories on Big Think in 2022
These were the stories you clicked on the most.
Neuropsych
Honeybees join humans as the only known animals that can tell the difference between odd and even numbers
Parity tasks (such as odd and even categorisation) are considered abstract and high-level numerical concepts in humans.
13.8
The mathematical explanation for “spontaneous synchronization”
It’s spooky, and it’s happening all around us. And inside us.
Up Next
Culture & Religion
Is Fasting the Key to a Healthy Diet?
Research on varied forms of intermittent fasting is proving to be of value.