If you were to ask a stranger at a bar what their blood type was, the best-case scenario in most of the world would be that you’d receive some very strange looks. But if you were in Japan or South Korea, you might actually get a response. In these cultures, blood type is believed to influence personality much in the same way that zodiac signs work in Western cultures. The reason why this came to be a cultural phenomenon in these places, though, has something of a dark history.

How the blood types break down

For the curious, here’s how the system works. People with type A blood are warm, friendly, compassionate, and kind. They get along well with people and make good friends. However, they can be a little obsessive, fastidious, and shy. Sometimes their affection can be overbearing, and they tend to neglect their own happiness. Since the blood type personality theory parallels the zodiac sign system, there’s also romance a component: Type A people should try to date other type A people or type AB people.

Type Bs are creative, outgoing, spontaneous, and extroverted. On the negative side, they can be self-centered, impatient, and overly independent. Their dating life looks like type As’: they should date other type Bs or type Abs.

Type ABs are, naturally, a mix of type A and type B qualities. They somewhat contradictory—they can be shy at times and outgoing at others. They are considered to be very rational and adaptable, but they can be critical, indecisive, and aloof. Since they’re so flexible, they can date pretty much anybody.

Type Os are confident, strong-willed, and competitive. On the negative side, they can be very selfish, arrogant, and aggressive. Again, their best bet is to date other type Os or type ABs.

While there are other blood types out there—like the so-called “golden” blood type, Rh-null—the personality theory really only accounts for the major types listed above.

It’s certainly fun to compare and contrast the purported traits with yours and others’ blood types, but like zodiac signs, there’s little scientific evidence to back up the claims. However, the history of the blood type personality theory does have its roots in academia. 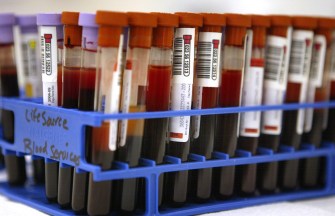 From eugenics to pop psychology

Blood types were first discovered in 1901 by the Austrian physician Karl Landsteiner. The discovery was monumental. If an unfortunate individual were to receive a blood transfusion from an incompatible donor, they could expect a host of undesirable symptoms: fever, burning sensations, chills, the formation of lethal blood clots in the veins, and an inexplicable sense of impending doom.

While it ultimately became one of mankind’s greatest medical achievements, this research was also turned to dark ends. In the early 20th century racially charged thinking and eugenics were growing in popularity across the world. The Nazis would become obsessed with the idea of blood purity. The different blood types were believed to correspond to the different races, and although the ratio of blood types do vary by ethnicity, researchers at this time also ascribed different racial characteristics according to blood type. In particular, type B blood was seen as degenerate. As reported by Der Spiegel, one bacteriologist claimed that carriers of type B blood had more “individuals identified as inferior,” and that the blood type often found in “psychopaths, hysterics and alcoholics” as well as—weirdly—”brunette individuals.”

By the mid-1920s, this strand of research had made its way to Japan. One study by the social psychologist Takeji Furukawa titled “The Study of Temperament through Blood Type” put forth the first iteration of the blood type personality theory. His study was significantly flawed, as it used an excessively small sample size and unsound statistical methods to reach its conclusions. Furukawa, however, enthusiastically promoted the research, and it took hold in Japan. Some employers began including a box in their job applications to see if potential hires had compatible blood types for the work, and the increasingly nationalistic and expansionistic Japanese government even began to apply the concept in their military, going so far as to group soldiers by their blood types.

Furukawa himself argued that the blood type personality theory could be useful in the field of eugenics, which had become the subject of a great deal of interest in Japan during the first half of the 20th century. Some pundits believed that it was essential for the Japanese to remain junketsu or pure bred, while others argued that konketsu or mixed-bred Japanese could acquire desirable qualities believed to be found in other races. Furukawa would later engage in a study of Taiwanese blood types to try and clarify why they so passionately resisted being conquered by Japan in 1895. Since the majority of Taiwanese were type O, he concluded that it was due to the alleged type O tendency towards aggression and stubbornness.

How did this disturbing history translate to the comparatively banal (though sometimes still discriminatory) practice of using blood type that we see in modern Japan and South Korea? As the 20th century moved on, the idea of blood types having an influence on personality dropped from the public consciousness until the 1970s, when it was revitalized by a journalist named Masahiko Nomi. Nomi’s work removed much of the racist and eugenic aspects of the theory’s earlier incarnation. Once again, the subject proved to be wildly popular. Nomi published 65 bestselling books, and, after his death, his son Toshitaka Nomi continued the work until his own death in 2006. The modern incarnation of the blood type personality theory largely originates from these two writers, and, although it is significantly less prejudiced than it was in the early 20th century, people are still sometimes bullied or denied employment because of their blood types. There’s even a term for harassment based on blood type: bura hara.

The theory certainly holds more water than the idea that zodiac signs influence personality. It’s difficult to see how the position of the stars could have an effect on an individual, but its conceivable that some genetic factors might contribute to both blood types and personality to some extent. Still, the bulk of the scientific research on the topic has failed to find any significant correlation between personality and blood type, with only a few controversial outliers. While the idea might be a pleasing diversion, it’s probably for the best that human beings aren’t so easily placed into boxes based on whether they’re a Taurus or a type B. If one had to choose between a world where one’s personality was determined by circumstance or molded throughout the course of one’s life, most would probably prefer the latter.

A program in Brazil both helped and harmed. What can we learn from it?
Health

Cancer cells seem to have a harder time growing among pair-bonded mice, according to a new study that explored the “widowhood effect.”
Up Next
Starts With A Bang

Starts With A Bang Podcast #42: Black Holes And Gravitation

Black holes are some of the most fascinating objects in the Universe, and when they appear in binary systems, we can detect their presence directly through gravitational waves. ( Northwestern […]