Blockchain has made some huge popularity gains over the past couple of years, but the concept of a blockchain phone still remains quite a mystery.

We’re both baffled that so many companies are trying to so hard to bring this concept to reality, and also surprised that it’s taken this long and we don’t already have a fully working model.

What is the blockchain phone, and which companies are developing it?

The main purpose of a blockchain phone is quite simple: To act as a hardware wallet keep your crypto safe.

However, it goes without saying that most of the companies willing to stick their neck out to create a blockchain phone have far greater ambitions than merely creating a glorified crypto storage device.

Sirin Labs’ Finney and the HTC’s Exodus are set to be the first blockchain phones, with both companies planning to release by the end of the year.

However, despite them both having the label of ‘blockchain phones’, the companies have integrated the technology in different ways, creating unique models. 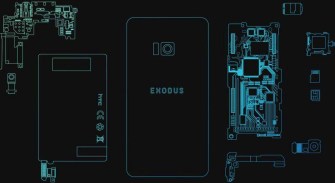 What are the security risks?

At first, the idea of a blockchain phone raised many eyebrows. Most people would consider their phone the last place to store all of their cryptocurrency—not least because the Android operating system has been found to include a number of security risks.

Following the increased number of attacks on centralized exchanges since cryptocurrencies have become more mainstream, many people have chosen to steer clear of software wallets altogether.

In fact, investors are so worried about security risks that they prefer to store their crypto in a cold storage wallet, which is completely disconnected from the internet.

Another big deterrent is the consideration that even if the phone is secure, it could be lost or stolen at any time, leaving the user without a phone but also without all their cryptocurrency..

Think about the amount of cash you feel comfortable carrying around in your pocket—the likely answer is, not much.

Now think about walking around with your entire savings account tucked away in your back pocket.

This raises the question, how do we get around these risks?

“We’re still at the very early stages of educating users that this is not a 100 percent secure solution, but as of right now it’s the best so far. It’s our attempt to do something that’s best from the market.”

Companies are working to make the blockchain phone more secure

The HTC Exodus improves security by allowing users to hold their own keys and placing them in a trusted execution environment that is separate from the operating system of the phone. It’s part of an ARM chip called TrustZone.

This mechanism has been used by several other companies in the past to protect important data. For instance, Apple uses it to protect the information it stores about your fingerprint and your face that you use to unlock your phone.

However, even with these security precautions in place, it’s still not entirely foolproof.

“We’re still at the very early stages of educating users that this is not a 100 percent secure solution, but as of right now it’s the best so far. It’s our attempt to do something that’s best from the market.”

The Finney phone, on the other hand, will feature a second touch screen that can be slid up from the rear of the device.

This is designed to turn on the device’s cold storage wallet which will cut off all unencrypted communications and ensure that the digital storage is inaccessible, in order to facilitate secure transactions. The phone can be used and bought with Sirin Tokens (SRN).

Nimrod May, the chief marketing officer at Sirin Labs, said that:

“The vision of Sirin Labs right now is to bridge the gap between the Blockchain economy and the mass market, by basically addressing and resolving these two inherent problems.” 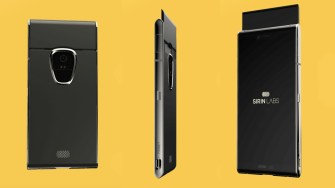 Sirin’s Finney phone has a slide compartment for the cold storage crypto wallet. When the compartment is closed, the wallet is offline and completely shutdown. To open the cold wallet, you slide up to reveal a 2-inch second screen for the authentication key.

How will a blockchain phone change society?

The creation of the blockchain phone isn’t merely to give people yet another place to store their crypto. In fact, it symbolizes something much larger. In addition to giving people a new way to relate to their crypto, it will change the way they relate to their data and their identity.

Given the increasing number of data breaches we’re witnessing from large corporations, it’s apparent that people are becoming far more suspicious of the corporations controlling their data, and are interested in finding alternatives.

The blockchain is a transparent, immutable digital ledger that grants users full control of their own data and addresses many of the challenges we’re currently facing with regards to our digital identities.

Ultimately, the use of this technology in the mobile phone represents a shift in control from large corporations, back to the individual users themselves.

“A few years down the road, we see a world where people own their own identities and data, where everyone understands the concept and economics of digital property,” says HTC’s Chen.

Are blockchain phones the future?

There’s no doubt about it that blockchain phones are about to become a reality. However, whether or not they will appeal to the mainstream is a different question entirely.

At first glance, it may seem like just another gimmick that you could use to impress your friends at a party but upon closer inspection, it’s clear that the idea presents some notable benefits over the standard mobile phones most of us are currently using today.

When we spend around 23 days a year on our mobile phones, surely security should be one of our main priorities?

Which is exactly what the blockchain phone is set to provide.

How the Blockchain revolution will decentralize power and end corruption

Tags
blockchaindevelopmentinnovationprivacysecuritytechnology
In this article
blockchaindevelopmentinnovationprivacysecuritytechnology
Related
The Present
How heat pumps of the 1800s are becoming the technology of the future
Innovative thinking has done away with problems that long dogged the electric devices — and both scientists and environmentalists are excited about the possibilities.
The Present
How California could save its rain instead of letting it drain into the ocean
Why can’t more rainwater be collected for the long, dry spring and summer when it’s needed?
Hard Science
Scientists use laser beam to divert lightning strikes
Laser-guided lightning systems could someday offer much greater protection than lightning rods.
The Future
Paper-thin solar cell can turn any surface into a power source
Some solar cells are so lightweight they can sit on a soap bubble.
The Past
How electricity stormed past steam and became the power of the future
The shift from steam to electricity was inevitable — but some foresaw it earlier than others.
Up Next
Hard Science
Are we alone in the galaxy?
Chances are we have neighbors somewhere in the Milky Way.